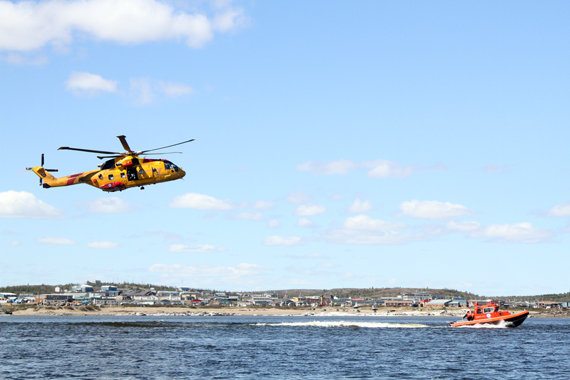 A Cormorant helicopter from Nova Scotia flies above a search vessel on Kuujjuaq’s Koksoak river as part of a 2014 simulated rescue scenario. Kuujjuaq officials hosted the Northern SAR Roundtable met in the Nunavik community last week. (PHOTO COURTESY OF THE KRG)

KUUJJUAQ — The Canadian Coast Guard Auxiliary plans to expand its network to Nunavik for the first time, and to new communities in Nunavut.

The CCG Auxiliary is a Canada-wide network of hundreds of coastal communities whose volunteers contribute search and rescue resources to CCG-led marine rescue efforts.

Those community assets are particularly in demand in Arctic regions, where local SAR crews are considered highly experienced, and where resources are fewer and farther between.

“But the real backbone is the thousands of volunteers who give their time.”

Vardy spoke at the Kativik Regional Government council meeting in Kuujjuaq Feb. 24, explaining the need for more SAR support in the Arctic, a region where maritime traffic has now risen to hundreds of commercial and private vessels each year.

The seven vessels in the Coast Guard’s Arctic fleet are tasked with a number of roles, including ice-breaking, weather monitoring, spill clean-up and rescues.

“But our ice-breakers are going at max right now,” he told KRG councillors. “So that’s a real concern and something our government is looking at now.”

Today, Vardy said, a quarter of all maritime incidents are responded to by auxiliary members. The CCG auxiliary is already in place in a handful of Nunavut communities, including Pangnirtung and Cambridge Bay, and coordinators hope to expand to even more.

To help, the new federal government has committed $500,000 to beef up the CCG’s Arctic maritime SAR program.

So this May, the Coast Guard will bring four Nunavimmiut to Trenton, Ont. to receive three-day training that will allow them to join the auxiliary.

Craig Lingard, the KRG’s coordinator of civil security, said his department will start by identifying trained SAR crews, certified to work with their community-owned search and rescue boats.

The program itself is a strictly volunteer service, although any search and rescue activities are fully reimbursed by the CCG.

Auxiliary members and vessels are fully insured — they also receive safety gear through the program.

Under federal regulations, however, auxiliary members are obligated to respond to maritime incidents if they’re considered the closest to the vessel in need.

“By being officially recognized, we’ll also be officially tasked to respond,” Lingard noted.

The goal is for the Ontario-trained members to return and help train other Nunavimmiut. The KRG hopes to have all 14 communities in the region on board by 2017.

Eventually, even private boat owners in the region could decide to be trained and become auxiliary members as well, Lingard said.