“Is this going to happen all winter?” No, says power corp. president 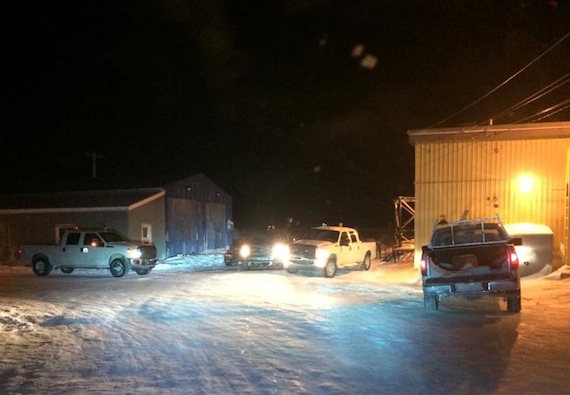 Trucks light up the Qulliq Energy Corp. offices in Cambridge Bay as workers try to restore full power to the community Nov. 27, in this photo posted on Cambridge Bay’s Facebook news page.

As temperatures in the western Nunavut town of Cambridge Bay dropped, with windchills lowering temperatures to below -35 C, and the sun set shortly after 12:30 p.m., people in this community of about 1,600 experienced what’s become an all-too-frequent occurrence: a black-out, followed by rotating intervals of power that left some in the cold and dark, without power for an hour or more at a time.

The latest round of problems — the fourth this month — at the 47-year-old power plant started Nov. 27 in the early afternoon and was resolved at about 10 p.m. — but the lack of electricity again shut down schools, the daycare and offices around town.

Alain Barriault, the president of Qulliq Energy Corp., told Nunatsiaq News Nov. 28 that the main generator at the power plant has now been fully repaired — and that, even if smaller engines now break down, power in the community can be maintained.

Two mechanics, two electricians and a specialized technician are on site, he said. As well, a stock of extra parts has been brought in.

“We have all the resources on site,” he said.

Break-downs of generators and regular maintenance have occurred before in Cambridge Bay, but residents in the growing hub probably wouldn’t have suffered any interruption in service because the demand for electricity was lower, he said.

The generators at the power plant are now running at capacity, Barriault said, which means that even when one of the smaller engines is offline, this can lead to a power outage.

“We never plan to have it happen,” Barriault said, apologizing for the inconvenience and frustrations many experienced due to the power outages.

Cambridge Bay, where the Canadian High Arctic Research Station will open in 2017, upping the need for electricity even more, is one of many Nunavut communities that have been prioritized for improved capacity, he added.

“Is this going to happen all winter? I appreciate the hard work the power corp. guys are doing to keep us lit up but it’s getting a tad frustrating to be sitting in the dark cold house for an hour at a time,” said a woman in a Facebook posting.

“Having 2 babies is hard when the power goes out. Thankfully mine r both sleeping now, my phone is charging and I have a book to read. I don’t think anyone is complaining I think we all just want some answers as to why this keeps happening… its been a few weeks of the same thing, plus the power guys must be tired.”

While some said people should be resilient and be tough like elders, James Panioyak said “remember too that some of our Elders today are alone without any help and they are vulnerable to anything.”

Panioyak, who works as a Inuinnaqtun translator-interpreter, said he’d be unable to deliver on urgent contracts due to the recent power outages.

Cancellations of events slated for Nov. 27 also included the decoration of St. George’s Anglican Church for the upcoming holiday season.

Many did try to make the best of the cold, dark situation: one man said he was singing Christmas carols in the dark, while a young mother said her two daughters drum-danced to keep busy.

Other residents looked for camping stoves to cook — while some cautioned against using outdoor cooking appliances indoors.

One woman said she planned to stock up on more batteries and candles, in case of future power outages.

Cambridge Bay: Power has fully been restored. Many thanks to the community for their support and understanding and for our Cam Bay staff.