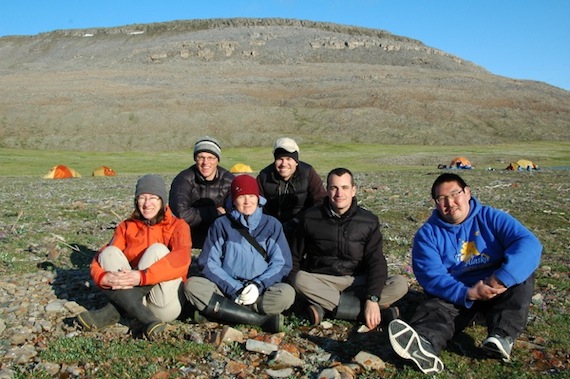 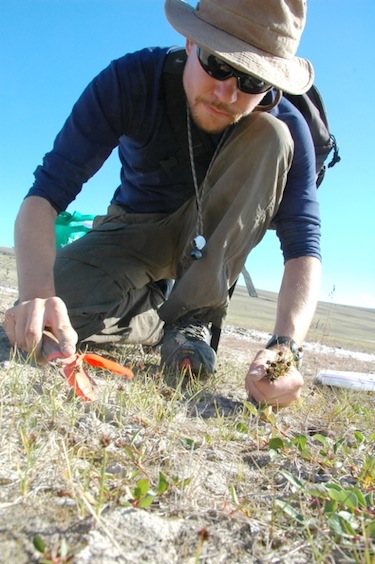 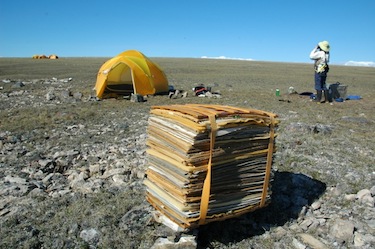 The field camp from a summer 2008 expedition to Victoria Island, Nunavut, shows the processing tent and plant press used to preserve and transport specimens collected in the field. (PHOTO COURTESY OF THE CANADIAN MUSUEM OF NATURE) 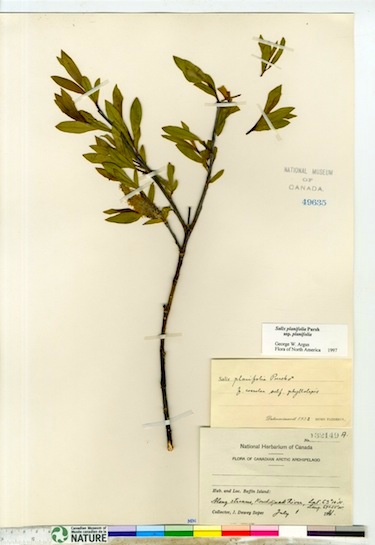 This is what a herbarium sample looks like after it’s been dried and mounted. This example of Salix planifolia, commonly known as tea-leaved willow, was collected by J. Dewey Soper July 1, 1931 along what is now the Soper River. (PHOTO COURTESY OF THE CANADIAN MUSUEM OF NATURE)

Dr. Jeff Saarela plans to spend the better part of July floating down the Soper River and for decades to come, scientists will thank him for doing so.

Saarela, along with three colleagues from the Canadian Museum of Nature in Ottawa, plan to spend about three weeks camping at various locations along the heritage river collecting Arctic plants as part of a five-year Arctic Flora of Canada and Alaska project.

“I can speak for the whole team when I say we’ll be very excited when we’re out there, starting to do our work. Seeing Arctic plants, they’re like old friends,” he says, with a self-conscious laugh.

“I’m looking forward to exploring. We always find things we didn’t expect to find, species never found in that area. As scientists, we get really excited about those things because it helps us build our understanding of species diversity.”

Unless you’re a botanist, you might not appreciate the depth of anticipation that radiates from this smalltown, blue-eyed, 34-year-old Manitoban.

But it’s not every day a scientist gets to contribute so comprehensively to the current understanding of Arctic vegetation and to help future generations of scientists track how our fluctuating climate is impacting what grows on the tundra.

A flora is an inventory of plant species that grow in a particular place. There are existing floras for portions of the Arctic compiled during different times over the past century, but some plant names have changed and so has the way plants are classified.

Saarela and his colleagues — veteran museum botanist Lynn Gillespie and assistants Paul Sokoloff and Roger Bull — want a complete picture which encompasses the entire North American Arctic and one taken during a specific time frame so researchers can see what’s happening across the Arctic right now.

Without that baseline data, it would be impossible to know if and how the tundra is evolving under warmer skies and longer summers.

“We know that shrubs are getting bigger and more dense. When that happens, it changes the ecology of an ecosystem. There’s more shade, for example. There’s the potential for some species to become less common and others to become more common, or places for new species to come in,” said Saarela, who’s made four Arctic field trips thus far.

And as the tundra melts, there’s more decomposition, he added, which provides more nutrients on the ground for plants to grow in.

“There’s a lot of unknowns,” he said. “That’s why it’s critical to get out on the land now, to make collections, and see what’s there.”

Museum researchers, government scientists and university scholars from across Canada, Alaska and Norway will be helping Saarela and his team over the next few years to gather and identify specimens and to offer expertise on plant classification and biodiversity.

One of those colleagues is Alain Cuerrier, an ethnobotanist with the Institut de recherche en biologie végétale at the Montreal Botanical Gardens. He will be providing Inuktitut plant names and notes on traditional usage for the project.

“It’s simply a respectful way of acknowledging people who have knowledge. It’s fine to have the Latin name but it’s also important to have the Inuktitut name and uses. It just makes sense,” said Cuerrier, who has published several books through the Avataq Cultural Institute including The Botanical Knowledge of the Inuit of Kangiqsujuaq, Nunavik.

“We were a bit blind for so many years, not including that information,” Cuerrier added. “It’s like we’ve woken up and it’s about time because we are losing that knowledge.”

Researchers chose the Soper River for several reasons. For one it’s accessible and secondly, the valley is somewhat sheltered from the elements which means it’s usually warmer than nearby Kimmirut and contains plant species, including tree-like willows, that don’t grow elsewhere in the Arctic.

It’s a microclimate, Saarela said, and could foreshadow the kinds of plants that will spread across the territory as temperatures rise.

The river journey, set to begin at the end of June 2012, has taken months of planning. Bull, an expert in expedition cuisine, has been busy for weeks dehydrating stews, salads and even desserts.

All four researchers underwent rafting and firearms training though the two shotguns they’re packing will only be for safety, not hunting. They do, however, plan to fish for char.

Louis-Philip Pothier of Iqaluit’s Inukpak Outfitting, has been assembling the team’s gear which will include three 16-foot long inflatable canoes, “which look like big blue bananas,” Pothier said.

The rugged canoes deflate to the size of hockey bags and can be transported by helicopter to the departure spot near Mount Joy.

For added safety, and to give the crew extra storage space, Pothier fashioned a detachable wood platform, roughly three feet by seven feet, which will join two canoes together, catamaran-style.

“This will be a super stable craft, which is important to them, especially if they are carrying a lot of gear,” Pothier said. Water levels on the Soper are high this time of year, he added, and will likely produce Class 1, 2 and possibly Class 3 rapids.

While the gear may be high tech, technology for collecting and preserving plants hasn’t changed much over the decades. Plant samples are cleaned of soil, placed on newsprint and then pressed between squares of cardboard.

Stacks of samples are then strapped together and left in the wind and sun for drying—cardboard is ideal for this purpose because the corrugation allows for air circulation. Those stacks will then be wrapped in plastic and duct tape and will accumulate on the wooden platform, taking up space left behind by diminishing food supplies.

When they return to Ottawa, researchers will then affix samples to acid-free paper and submit them to the National Herbarium of Canada, a plant library within the museum dating to the late 1800s and containing more than one million collections from Canada and around the world.

The team plans to bring home multiple samples of each species so spares can be sent to herbaria around the world, not only to spread knowledge of Arctic vegetation but to ensure duplication in case of fire or other damage.

The Soper River field trip, which will cost about $30,000, is funded jointly through the Canadian Museum of Nature and Natural Resources Canada’s Polar Continental Shelf Project.

If you want get updates on the Soper expedition, Saarela is taking a two-way satellite communicator which will allow him to update his Twitter account, @jmsaarela, and which will automatically upload his GPS position every ten minutes. You can follow his progress down the river here. Click the “plus sign” for detailed tracks