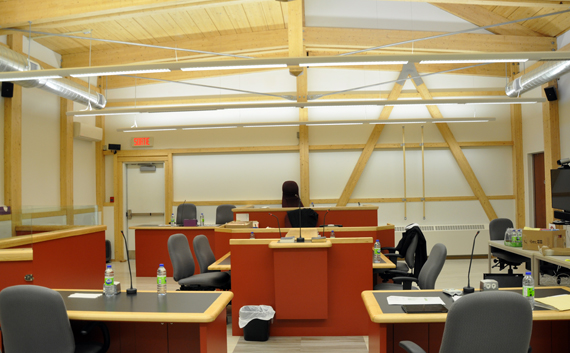 The courtroom in Puvirnituq sits empty before a week-long criminal court session begins Nov. 13. In Nunavik, Gladue reports are a sentencing tool that is being used more and more often. Writers prepared 60 Gladue reports for Nunavimmiut offenders this past year, more than the number in any other region of Quebec. (PHOTO BY SARAH ROGERS) 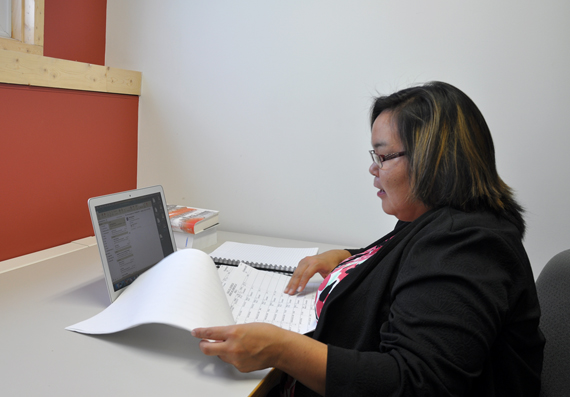 PUVIRNITUQ—A young woman from Akulivik looks nervous on the stand as a prosecutor reads her charges.

The 21-year-old faces her second impaired driving charge, though her first as an adult offender.

Typically, a second charge would mean detention time, but in this case the woman’s lawyer asks the judge for a Gladue report.

The woman’s lawyer, Sarah Plamondon, explains to the court that her client had a difficult upbringing: her mother left while she was young and the woman now supports other family members through hunting.

The report will suggest an appropriate sentence for her crime.

In Nunavik, it’s a sentencing tool that’s being used more and more often. Gladue reports have been prepared for 60 Nunavimmiut offenders this past year, said Makivik Corp.’s justice program.

The region sees the highest overall number of Gladue reports published in Quebec, almost double that of the Eeyou Itschee Cree territory.

Makivik is contracted by Justice Quebec to prepare Gladue reports for Nunavik offenders, which allows it to hire and train a handful of Inuktitut-speaking writers.

Louisa Qaurritaiyuk has helped prepare a few Gladue reports since she recently came on board as the new Montreal-based justice assistant.

Originally from Puvirnituq, Qaurritaiyuk is back in her home community during the circuit court visit the week of Nov. 13, and her courthouse office sees a steady stream of visitors.

“We’re trying to help them understand the judicial process and who’s who,” Qaurritaiyuk said. “Some of them don’t know what they’re doing here.”

Makivik also heads Nunavik’s justice committee initiative, which, since 2000, has helped launch committees in 10 of the region’s 14 communities.

The committees work with local offenders as they navigate the justice system, as well as with community members who are victims of crime.

Similar to Gladue reports, justice committees can also intervene by meeting with offenders and their families to come up with alternative measures, which are presented to prosecutors or judges.

If the measures are agreed upon, an offenders’ charges are dropped and they might instead be sentenced to community service, with tasks that focus on their strengths.

In one case, an offender was asked to make mittens for people in her home community.

“In the courtroom, it feels like you’re just given orders,” Qaurritaiyuk said. “The committee is there to listen to the person and give support.”

“They’re not just criminals—they’re trying to improve their lives everyday.”

The justice committee in Puvirnituq has even expanded its mandate. The committee set up a new office in the local co-op store, with a phone set up for community members to come and make calls to relatives incarcerated in the South.

Annie Aupaluk, a long-time member of Puvirnituq’s justice committee, spends most weeks during the circuit court visits in the courthouse, chatting with families in the waiting area or sitting in on trials.

“We meet with the accused here. We talk to them and follow the docket,” she said.

Makivik’s justice officer estimates that in 90 per cent of the Gladue reports prepared in Nunavik, offenders recall sexual assaults or abuse in their pasts.

In about 85 per cent of reports, it’s the first time that person has disclosed abuse.

Gladue writers receive training to deal with those circumstances, but all offenders are referred to social services for help if they want it.

Although Nunavik’s justice program has been in place for many years, a 2016 Quebec ombudsman’s report on the region’s justice system noted that Inuit offenders were forced through a justice system largely designed for the South.

Sarah Plamadon, who has worked as a defence lawyer in Puvirnituq for 15 years, said the local justice committee is an important and helpful resource, although it’s seen a lot of turnover in recent years.

“I think [judges] welcome any solutions besides imposing sentences,” she said.

Judges and prosecutors who serve the region’s justice system do so respectfully, she said, and make an effort to accommodate offenders’ needs.

“That said, the justice system is not the solution,” Plamondon said. “We need to have other resources.”