Kiggavik uranium hearing ends with no plebisicite in Baker Lake

“Inuit are like caribou — they stay away from danger and conflict” 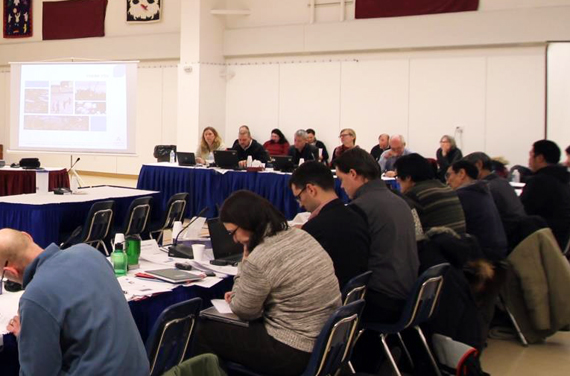 A public hearing into Areva Resources Canada’s proposed Kiggavik uranium in Nunavut project has wrapped up, but the Nunavut Impact Review Board might never know how the people of the community closest to the proposed mine — Baker Lake — actually feel about it.

On March 14, the final day of the hearing, Baker Lake’s deputy mayor, Silas Arngna’naaq, made a motion to keep the hearing’s record open until the hamlet holds a plebiscite to gauge local opinion on the project, which proposes to sink $2 billion into an open pit and underground uranium mine 80 kilometres outside the Kivalliq community.

The motion didn’t pass and that record is now closed — the NIRB said that the hamlet had plenty of time to host a plebiscite beforehand.

“I don’t know how much sway it would have,” Arngna’naaq said. “But I know they wanted to get the view of the closest community to the project. And they never got the full community’s perspective on this.”

But the local group gathered just 20 signatures, Arngna’naaq said, rather than the required 20 per cent of the population.

“So the petition never came through,” he said.

The community leader and former Northwest Territories MLA said the hearing was, in fact, a fair and inclusive process, but Baker Lake residents still aren’t clear on where they stand.

“The community has not prepared itself enough to respond to this properly,” Arngna’naaq said.

“I think people had a basic idea of what this project is about, but all that other technical information coming out — I don’t think everyone understood it,” he said.

That’s despite having been through the process once before with Agnico Eagle Mines’ Meadowbank gold mine, which operates 70 km north of Baker Lake.

“I think people had a basic idea of what gold is, and what uranium is,” he said. “Gold is something I would give to my wife as a present; uranium is something you send off to fight an enemy.

“That’s how people think about it,” Arngna’naaq added. “But Inuit are like caribou — they stay away from danger and conflict.”

Five of the seven Kivalliq communities represented at the Kiggavik hearings last week expressed clear opposition to the project. Arviat’s leadership is divided and Baker Lake is “neutral” on the subject, Arngna’naaq said.

Arngna’naaq is personally opposed to the uranium project. He shares many of the community’s concerns about the absence of a project start date and the absence of safeguards to protect local wildlife areas.

But the hamlet council’s position, as submitted to the hearings, was to indicate that, should the NIRB approve the certificate for Areva to proceed, the hamlet would be willing to work with them.

The NIRB now says it will have a final report complete within the next 45 days, at which point it goes to the federal department of Aboriginal Affairs and Northern Development for review and consideration.

If the Kiggavik project is allowed to proceed, the board would also recommend terms and conditions to be included in a project certificate — conditions meant to mitigate the potential socio-economic and environmental effects.

The NIRB won’t comment any further on the hearings until the release of its report.

All documentation filed at the hearing, and transcripts of the hearing itself, will be posted to its public registry in the coming weeks, the board said.