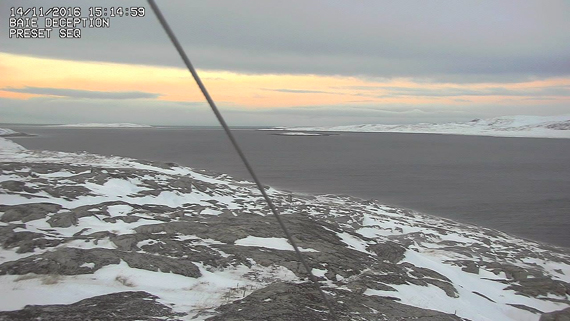 Here’s a view over Deception Bay in November 2016, taken by one of the ice monitoring project’s five cameras set up in the area. (PHOTO COURTESY OF KRG) 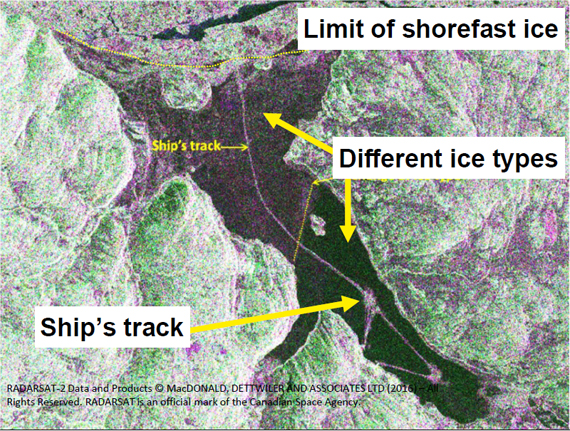 A radar image shows the ice in Deception Bay on March 31, 2016. (IMAGE COURTESY OF KRG) 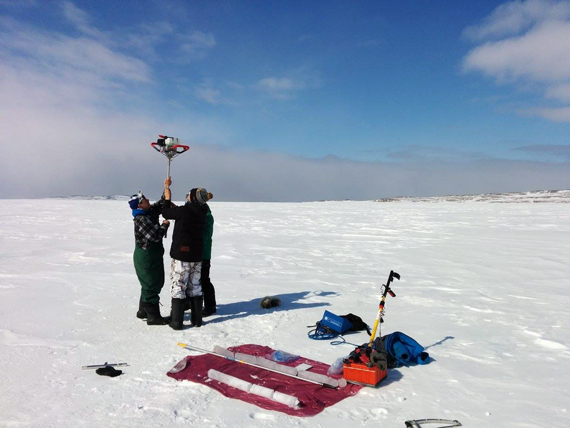 There, his job is to check about 20 different markers in the sea ice. Using a handheld auger, or Eskimo drill, Tuniq bores into the sea ice to gather samples to bring home.

Tuniq has seen gradual changes in the ice cover over the Hudson Strait. Some years, the ice forms later and melts much sooner than in past years, but it’s hard to keep track.

The freeze-up in 2016 was 20 days later than the previous year, for example.

“But it’s only the second year we’ve been doing this, so it’s hard to say,” Tuniq said.

“If it’s less and less ice every year, then we need to keep an eye on it for us to be able to travel safely on the ice.”

But an ice monitoring research project led by the Kativik Regional Government hopes to document those changes by compiling some baseline data.

The project launched in 2015 with support from Glencore’s Raglan mine and Quebec’s scientific research institute, l’Institut national de la recherché scientifique or INRS.

In addition to helping Inuit communities adapt to climate change, the research aims to find out more about the impact of increased ship traffic in the region on the local ecosystem.

The Raglan nickel mine uses a port facility at Deception Bay, roughly 100 km north of the mine site, from where ore concentrate is shipped south.

Ship traffic from cargo vessels has already changed ice travel for Inuit communities, Tuniq said. After an ice breaker passes through the area, snow machines typically can’t pass the same area for another 24 hours in the winter, he said, sometimes between 24 and 72 hours if the weather is mild.

“A few years ago, we were able to [travel along] the sea ice longer than the trails on land,” he said.

“I think this [project] be beneficial for us, after a few more years of research.”

There are currently five cameras set up at points around Deception Bay, which offer 180 degree views of the area.

There are also two sonars in place in Deception Bay; one positioned in shallow water and the second in deep water to track ships’ movements as they enter the bay.

Véronique Gilbert is an environmental technician at the KRG’s Department of Renewable Resources, Environment, Land and Park who oversees the project. She visits the Hudson Strait twice a year to work with Tuniq and other community guides and researchers.

Inuit already use traditional knowledge to determine when and where to travel, Gilbert said—this project will produce baseline data to see the bigger picture.

“In three years, we won’t know enough to identify patterns, but we can return in 10 years to see what the differences are,” Gilbert said.

“It will be really interesting for people in Salluit to see that data too.”

Several of the ice cores are sent to Quebec City for analysis, where INRS PhD student Sophie Dufour-Beauséjour is monitoring their levels of salinity to understand how that impacts freezing.

The two other control sites at Salluit and Kangiqsujuaq offer comparative data, but also provide hands-on experience for students in both communities to track the data themselves. The Avativut project allows students to take part in the field work and do their own lab analysis of the ice samples.