“This has to stop. We have to find a way to deal with this” 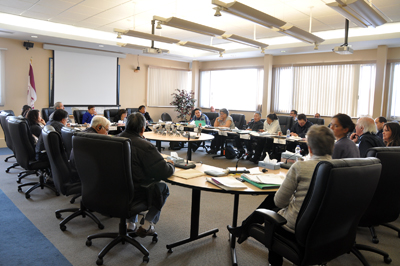 Kativik Regional Government council heard a number of concerns this week about police aggression and how to file a complaint. (PHOTO BY SARAH ROGERS)

Emudluk was responding to allegations of police aggression recently aired on social media and during this week’s meeting of KRG councillors this week in Kuujjuaq.

“I have seen bruises on people from my community,” Kangiqsujuaq council Charlie Arngak told KRG councillors Nov. 26. “This has to stop. We have to find a way to deal with this.”

A number of other councillors agreed, but expressed frustration in where to turn for help.

“Some of our police officers become violent, and that’s becoming an issue,” said Bobby Snowball, head of the Nunavik elders committee.

“Even if we table our complaints, we can’t deal with them here… and it’s hard for those who are unilingual,” he said. “We have seen too many unnecessary deaths. So where do we go?”

Many Nunavimmiut have asked the same question relating to an incident earlier this month, when a young woman from Aupaluk died following an altercation in which police and first responders had to transport her to and from the health centre.

The KRPF said in a statement that its local officers assisted in a medical transport of the individual twice on Nov. 11.

But some Nunavimmiut allege it was injuries caused during that transport that led to the woman’s death, the cause of which remains unknown.

“There is a place you can go if you have complaints against the police,” Emudluk said, pointing to Quebec’s police ethics commissioner’s office.

A complaint regarding the Aupaluk death has now been forwarded to that office, she added.

“You need to write it down, instead of just voicing your concerns at a meeting or elsewhere,” Emudluk said. “It has to reach a proper place.”

During the KRPF’s presentation to KRG council meetings the same day, chief Aileen MacKinnon reminded councillors that there is information on how to file complaints against police available in every community’s station, or electronically if you contact the KRPF’s Kuujjuaq office.

“If you ever need help filling it out, we can help,“ MacKinnon said.

Residents who feel like they’ve been treated unfairly by a police officer — typically in non-violent cases — can fill out a report that is forwarded to the police ethics commissioner, who then investigates the matter.

But because the commissioner’s office requires files from the KRPF to investigate, it’s best to file complaints right after the incident happens, MacKinnon said, to ensure all the relevant information gets passed along.

She offered an example: video footage from a prisoner’s cell only stays on file for a certain period of time.

And providing witnesses’ names is always helpful to the investigative process, she said.

The KRPF also has an internal disciplinary process, where a committee made up of civilian representatives can rule on the conduct of the force’s staff.

Three complaints have gone through this committee in the past, MacKinnon said, resulting in the dismissal of two officers.

In more serious cases, such as when a citizen reports they were beaten by an officer, MacKinnon said Nunavimmiut should contact the KRPF head office directly.

In cases of criminal behaviour, police are investigated by an outside force — usually the Sûreté du Québec — who pass their findings along to a Quebec Crown prosecutor, who can decide to lay charges.

A recent report prepared by the SQ regarding the July 2014 death of an Inukjuak man is currently within such a process.

“So we’re not hiding anything,” MacKinnon said. “There are steps in place and these processes have been done properly.”

A common complaint made during KRG council meetings is about the lack of Inuit officers working with the KRPF — an issue MacKinnon acknowledges as a major challenge for the force.

But McKinnon said she’s encouraged by the recent hiring of a new Inuk constable, Pamela Stevenson, as well as the future addition of Maryam İlgün, who is currently going through Quebec’s Ellis College to become a full-fledged officer.

Emudluk expressed confidence in the KRPF as it moves forward.

“I know there have been calls to replace the KRPF and have a force independent of the KRG,” she told councillors Nov. 26.

“But I don’t want to give up on this, I know it’s hard but we have to keep working on this.”