Compulsory arbitration? Bring it back 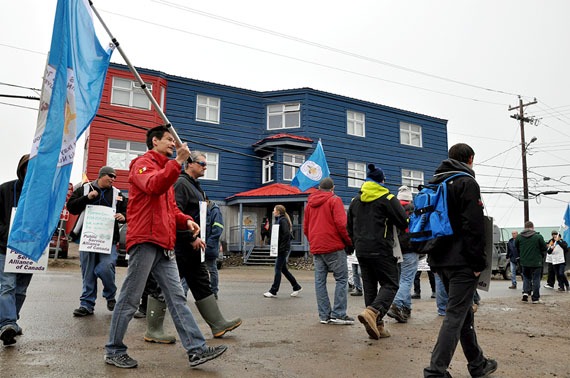 Striking workers wave flags and chant slogans outside the Qulliq Energy Corp.’s building in Iqaluit on the morning of July 16. QEC employees, who have been without a contract since Dec. 31, 2013, began the strike and set up picket lines just after midnight July 16. (PHOTO BY THOMAS ROHNER)

There they go again. On strike.

On one side, there’s a clumsy, unprepared government employer that can barely communicate with itself, let alone the public.

On the other side, there’s an equally clumsy union whose members have spent the last three weeks hurling insults and libel at their fellow civil servants, among other childish behaviours.

Public service strikes and lockouts don’t occur frequently in Nunavut — at least not yet. But when they do occur, as is evidenced by the current strike at the Qulliq Energy Corp., it’s not a pretty sight. These ugly, stupid confrontations do little to serve the interests of employers, the public or government workers.

But there’s a better way: compulsory binding arbitration. That’s when, after wage-benefit talks reach an impasse and mediation fails, a neutral third party acceptable to both sides is mandated to impose a legally enforceable settlement.

Until 1996, that’s how territorial government employers and government unions settled intractable disputes after the failure of mediation: binding arbitration.

And if there’s a lesson to be learned from the current strike by members of the Nunavut Employees Union against the QEC, it’s this: the Nunavut legislature should amend the Public Service Act as soon as possible to replace public service strikes and lockouts with compulsory arbitration.

A properly designed system of compulsory arbitration would respect the legislated collective bargaining rights of public service workers, as well as their Charter right to freedom of association. At the same time, it would offer a meaningful alternative to the use of the strike as a weapon of last resort.

For territorial government employers, it would mean a surrender of control over an important aspect of Nunavut government budget-making: employee wages and benefits. So be it. That control has never been absolute anyway.

But is it in the interests of public service members to surrender the right to strike? Yes, it is — as long as any new binding arbitration system is designed as a genuinely meaningful alternative.

It’s worth remembering that territorial government workers in Nunavut did not “win” the right to strike. In 1996, it was imposed on them against their will.

In 1995, the Liberal government of Jean Chrétien imposed brutal cuts on the Government of the Northwest Territories, slashing $150 million worth of federal transfers through the territorial financing formula.

With his back against the wall, John Todd, then the NWT finance minister, felt he had no choice but to cut. The GNWT eventually cut all wages by 6.25 per cent, eliminated employee housing allowances, and reduced vacation travel assistance payments, especially the big ones paid to territorial workers in high-cost Nunavut region communities.

To do that, the territorial government rammed a bill through the legislative assembly in only four days, in February 1996.

They eliminated compulsory arbitration and, in exchange, gave territorial government employees, including teachers, the right to strike.

But that right to strike was no gift. It was a poisoned pill. And the union that represented Nunavut-based government workers, then called the Union of Northern Workers, had never asked for it and bitterly opposed the removal of binding arbitration.

Soon after, the territorial government proposed its wage and benefit cuts, and union members voted. Workers in the western NWT, who outnumbered those in the Nunavut regions, carried the day. About 60 per cent of the unionized workforce voted to accept them.

Nunavut employees living in isolated communities suffered net losses estimated at between 15 to 25 per cent a year, while comparable workers in the NWT suffered losses of only six or seven per cent.

Nunavut inherited all that in 1999, including the controversial amendments to the Public Service Act. Though the Yellowknife government introduced those measures as a quick fix for a one-time fiscal crisis, they’re still in place and they still represent a net loss for Nunavut.

The Qulliq Energy Corp. is not an amoral corporation run owned by stock-holders and investment bankers. It’s a weak, struggling Crown agency that provides a life-essential service. It rarely makes a profit and often depends on regular bailouts from its owner, the Government of Nunavut.

Like all other Nunavut government departments and agencies, the QEC is run by salaried public servants who work for us, the public. Which means that for Nunavut public servants, who are also members of the public, the “right to strike” effectively means the right to go on strike against oneself.

Enough already. Amend the Public Service Act to restore a system in which a neutral, third-party arbitrator is empowered to impose a court-enforceable settlement. And do it soon, please. JB