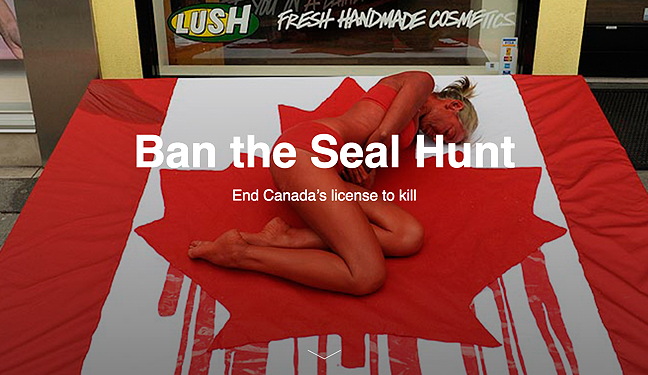 It’s these kinds of images, found on the Lush Cosmetics website, that Alethea Arnaquq-Baril tried to counterract in her film “Angry Inuk.”

In an age of perpetual Internet memory and split second social media sharing, companies are vulnerable to consumer backlash, especially when a corporate campaign is controversial and error-ridden.

Such seems to be the case with an on-going anti-sealing campaign by Lush, an international cosmetics company that makes plant-based products free of animal and human testing.

The campaign, which the company launched in 2009 in partnership with the Sea Shepherd Conservation Society, has been making the rounds on social media again and is drawing anger and frustration from Inuit for raising the old “clubbing baby seals” trope.

“The hunt needlessly claims the lives of hundreds of thousands of baby harp seals, 98 per cent of which are younger than three months old,” says a page devoted to the campaign on the Lush website.

“Since 2002 more than two million seals have been killed, their soft white pelts sold to the fashion industry to create fur trim, gloves and hats. We simply could not stand by while this cruel practice continued.”

Harvesting baby seals, or white coats, in Canada has been illegal since 1987. There are laws governing how seals are killed in Canada, penalties for breaking them and special trade rules allowing Aboriginal hunters to sell seal products to the European Union despite a ban on EU seal imports.

After suffering decades of economic and social upheaval thanks to anti-sealing campaigns from Greenpeace and other animal rights groups, Inuit are understandably frustrated and angry with Lush and their passionate but misinformed followers.

“That’s pretty vile. Racist propaganda coming back from the past to bite everyone,” said Iqaluit’s Laakkuluk Williamson Bathory, in a Jan. 19 written response to Nunatsiaq News about Lush’s stance on sealing.

“And pretty rich for the cosmetic industry that used to rely so much on Arctic animal oils until Greenpeace started making money from vilifying Inuit. All lipstick used to be made with whale oil. Their anti-seal campaign is preying on the ignorance of young urbanites who don’t know better and would like to imagine that their soap has no blood in it.”

Alethea Arnaquq-Baril was no less exasperated when contacted Jan. 19. Arnaquq-Baril has been winning awards for Angry Inuk, a film that attempts to educate a southern audience about Inuit harvesting and the fight to have harvesting rights respected internationally.

“I saw it and thought it was pretty hilarious,” said Arnaquq-Baril, about the Lush anti-sealing statement online.

“Obviously it’s uninformed. They talk about white fluffy baby seals which have been illegal to hunt for, like, 35 years.Their brand is against animal testing, vegan stuff, so it doesn’t surprise me. But they clearly haven’t done any homework on the actual issue.”

Part of the reason companies can get away with erroneous sealing statements is because so many of them do it and, “so very few people know the facts and can call them out on it,” she said.

She says it would be great if Inuit took legal action and actually forced groups to stop lying about the seal hunt. But Inuit can only do so much with limited resources and understandably distracted with other issues and priorities.

“These groups are able to raise enormous amounts of money with outright lies, at the expense of thousands of people who live in poverty,” she said.

As an artist and not a lawyer, she’s trying to do her part to spread truth through film. And based on audience reaction so far, her message is getting through.

“Otherwise it’s kind of like ‘whack-a-mole.’ They just keep popping up. So that’s why I felt I needed to attack this at the root issue and talk about the overall tactics of the campaigns and how they all started. But I hope at some point we can make headway.”

“This vision of hypocrisy concerning the seal hunt is certainly unnerving to those who live alongside these animals. We watch the rest of the country eat, earn money and live off of a multitude of species,” she wrote.

“Yet a small Indigenous group of people (who have been forced into the socio economic realms of capitalism) remain vilified and cornered into poverty by anti sealing campaigns such as this.

“Our own renewable natural resources remain untapped because of protesters while we watch everyone eating hamburgers.”

We contacted Lush for a reaction but they did not reply by our publication time.

But they did respond to some of the backlash on Twitter:

@lushcosmetics @innupower Instead of tweeting this over & over why not research how restrictions on seal hunt have devastated communities?

@lushcosmetics I use ur products but this is wrong and irresponsible. A commercial ban affects Inuit life, culture, nourishment and survival