“We’re going to save lives” 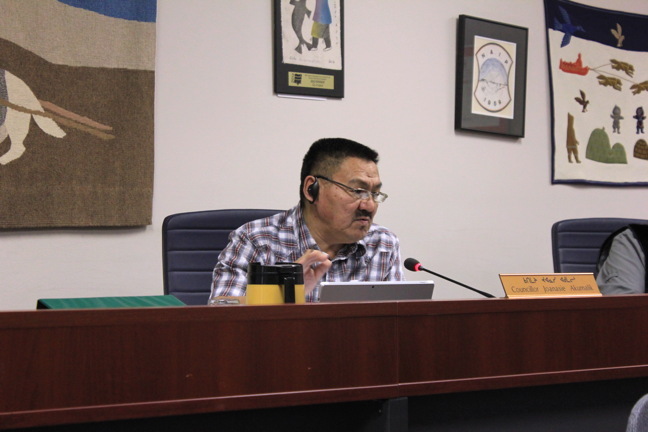 Iqaluit city councillor Joanasie Akumalik added homelessness to the agenda at a Jan. 10 council meeting to try to help people through the cold winter months when they have no place to go. (PHOTO BY LISA GREGOIRE)

Faced with fresh and dire reminders of how difficult it is to be homeless through an Arctic winter, Iqaluit city councillors have renewed their commitment to helping the local homeless population.

Coun. Joanasie Akumalik raised the issue at Iqaluit’s first city council meeting of 2017 Jan. 10, saying that in light of the December death of Jake Angurasuk, a man who frequented the Iqaluit men’s shelter, the city must do more to support homeless people and the facilities they use.

“Jake Angurasuk had no ID at all so therefore he didn’t exist in the eyes of the city and the GN [Government of Nunavut] and the federal government. He had no way of applying for income support program to keep alive. Those are the things that we also need to deal with,” Akumalik said.

Councillors and also Mayor Madeleine Redfern—many of whom had just returned to Iqaluit following Christmas vacation—agreed with Akumalik’s heartfelt plea and, by the end of the discussion, they had made several promising commitments.

Redfern said the city would contact Doug Cox, manager of the men’s shelter, to organize a city council tour of the facility to see first-hand what’s available and what’s needed.

Then they plan to invite Cox to a special council meeting open to the public so they can discuss with Cox how to best serve Iqaluit’s homeless population.

After that, Redfern said, the city would like to help facilitate a stakeholders meeting so that the GN’s new anti-poverty secretariat, organizations such as the Qikiqtani Inuit Association, and interested individuals and businesses can figure out how to find the money to meet those needs.

The downtown shelter for men is run by the Uquutaq Society but the society is currently constrained by an agreement with the city which says it must close its doors between 8:30 a.m. and 5 p.m.

That, Uquutaq’s Janet Brewster told Nunatsiaq News Dec. 20, seriously hampers the shelter’s ability to keep homeless people safe in winter or to offer services they might need to get healthy or find a job.

Redfern, Brewster and others took to Twitter in the wake of Angurasuk’s death in late-December to talk about the challenges facing those who want to address homelessness in Nunavut’s capital—and some of those challenges were raised at the Jan. 10 council meeting.

Coun. Terry Dobbin mentioned the GN’s anti-poverty secretariat and past roundtable discussions held on the topic of homelessness.

He said there’s too much talk and too little action. With a population of 8,000 people, surely there are not so many homeless people here that the city can’t help them, he said.

“I would be interested in trying to find out what were the actual outcomes of those discussions,” Dobbin said.

“Funding is great, but if you’re going to utilize the funding going around having roundtable discussions, and nothing materializes from these discussions, I would prefer the funding to go directly to the Uquutaq shelter rather than paying someone to go around and discuss poverty.”

Akumalik, who rejoined the discussion later agreed with Dobbin.

“I realize we’re talking about mental health and we know that organizations like the RCMP or religious groups deal with homeless people but are we going to talk, talk, talk, have a meeting and come up with recommendations and strategize? Is that what we’re going to do?” Akumalik asked.

He said that perhaps instead of the city spending money on gifts for the Christmas games every year, they could buy socks for homeless people or start up programs to help them.

“My vision for the homelessness in Iqaluit is to create programs for the homeless people so that, especially with the men’s shelter, that they can stay in that building, or elsewhere, to go about their duties especially in the cold minus-50 winters we have,” Akumalik said.

But Deputy Mayor Romeyn Stevenson said allowing the shelter to be open during the day alone might not solve the problem if the facility doesn’t have the space for programs and enough staff to serve them.

Which is why Coun. Jason Rochon suggested councillors visit the shelter to see for themselves what’s there and how it’s run.

Once Redfern summarized the city’s action plan, Akumalik took to the microphone one last time to thank his colleagues for taking the issue seriously.

“We’re going to save lives,” he said.