Crime down in Nunavik: police 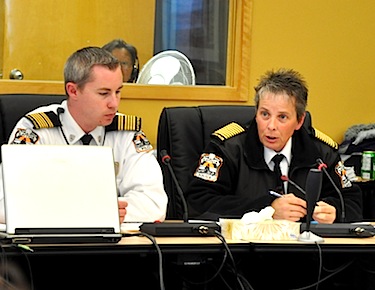 Kativik Regional Police Force interim chief Aileen MacKinnon presents an activity to Kativik Regional Government’s regional council Sept. 13. During the first half of 2011, statistics show a drop in crimes across Nunavik, compared to the same periods in 2009 and 2010. (PHOTO BY SARAH ROGERS)

Over the past three years, assaults have dropped by roughly nine per cent and sexual assaults by 12 per cent, with the numbers of mischief and breaking and entering incidents also down by about 12 per cent, according to information presented by KRPF interim chief Aileen MacKinnon Sept. 13 to Kativik Regional Government council Sept. 13.

Calls to police involving firearms have also dropped, with 19 reported in 2011 compared to 31 for the same period of 2010.

Despite the decrease in criminal offenses, there’s been an increase of about five per cent in the total number of incidents reported to police, MacKinnon said.

The KRPF is now running at full throttle, she said, with the police force making good on its 2009 promise to have at least three officers stationed in each community.

The KRPF now has 66 officers posted throughout region’s 14 communities.

Nunavik’s Investigation Unit continued to work with the RCMP and the Aboriginal Combined Forces Special Enforcement Unit over the summer, leading to the interception of two major drug shipments leaving the Montreal airport for Nunavik, information presented at the KRG meeting revealed.

Police arrested an individual en route to Inukjuak carrying 450 grams of marijuana, with a street value of more than $22,0000.

That incident led to another seizure of another 450 grams of marijuana being shipped via Air Inuit cargo from Montreal to Salluit.

Between May and August, the KRPF seized more than 4,000 grams of marijuana across the region and nabbed 102 ecstasy pills this past July in Kuujjuaq.

During the period, police also seized roughly $96,000 in bootlegged alcohol across Nunavik — $40,000 of that in Puvirnituq.

KRPF officers seized $1,281,635 in contraband substances across the region from January to June in 2011.