Deaf Nunavimmiut want better access to interpreters in the region 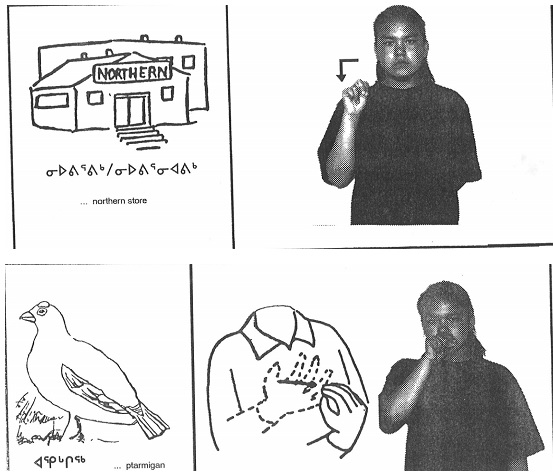 Here are some examples of Nunavik-specific signs for the terms Northern Store (top) and ptarmigan (bottom) from the American Sign Language and Inuit Signs manual developed in the 1990s by the Kativik School Board. The images were drawn by Pasha Angnatuk. (IMAGES COURTESY OF KI) 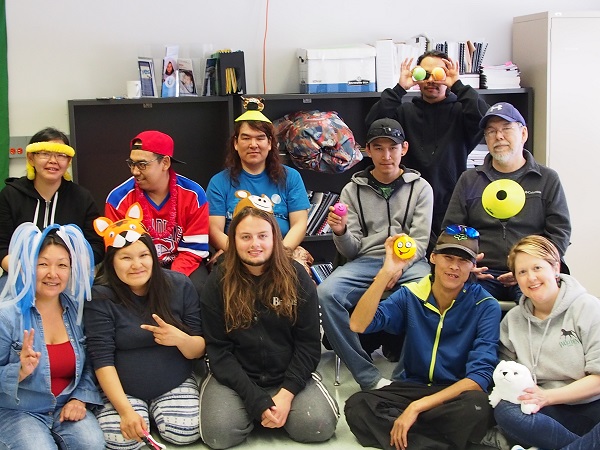 Nunavik’s health agency hosted a workshop for deaf Inuit in the region May 22-26, as a chance for participants to brush up on their sign language and identify the barriers they face in their communities. Here, the group takes part in a drama workshop. Daina Lizzie Iqaluk is pictured at top left. (PHOTO BY VALERIE BERTIN)

For a room full of people deep in conversation, it’s mostly quiet, while people’s hands do the talking.

The Pigiusivik centre in Inukjuak hosted a group of deaf Nunavimmiut last week, the second workshop of its kind that the regional health agency has hosted in recent years.

The workshop brings together a community that can rarely gather as one; if you are a deaf person living in Nunavik, you are likely the only one in your village.

As one of just over a dozen deaf Inuit adults living in Nunavik, Daina Lizzie Iqaluk said it was fun to host the region’s deaf community in her hometown.

“I miss having deaf people to communicate with,” Iqaluk said using sign language, through an interpreter. ” I am really enjoying socializing with deaf people at this workshop. We all improved and learned new things because we are all deaf together.”

Through the 1990s, just over a dozen babies and children in Nunavik became deaf as a result of being infected with meningitis.

Now all in their 20s and early 30s, there are 15 deaf adults and two deaf children living in nine different communities.

Most of these individuals have had access to the services they needed to complete their education and to learn American Sign Language, even though they live in a region made up of small and remote communities. Over the years, a distinct Nunavik Inuit sign language has emerged to communicate more than 100 terms that are specific to the region and culture.

Iqaluk, 25, graduated with a diploma as a daycare worker in 2017. She works as a substitute worker at an Inukjuak childcare centre while she raises her six-year-old daughter.

Iqaluk estimates that about 20 people in Inukjuak know at least some sign language or can fingerspell to her, including her parents and a handful of close friends and cousins. Otherwise, she writes back and forth with people to communicate.

“My boyfriend, Mark, and my daughter sign, but I should be teaching them more signs and signing more with them every day,” she said.

“Both Mark and my daughter attended the workshop for the deaf of Nunavik this year and both of them learned a lot and improved their sign language a lot in this workshop.”

Iqaluk’s daughter’s teacher at school is Rita Ninguik—the same teacher who worked as her own sign language interpreter as a child.

Despite the support she receives, Iqaluk still wishes there was more support for deaf Inuit in the region.

“I wish I had a sign language interpreter,” she said. “If I go to the hospital, I don’t understand the nurse or the doctor. Or if there ever is an issue with the police, I really need an interpreter. I don’t like to have to always write and write and write.”

Improved autonomy was one of the major needs that came from the first deaf services workshop the Nunavik Regional Board of Health and Social Services hosted in 2016, said Linda Ritchey, a consultant to both the health board and Kativik Ilisarnilirniq.

And the needs remain essentially the same today.

“[Deaf Nunavimmiut said] they felt welcome in their communities, but for personal appointments or to access certain services, there was a struggle,” Ritchey said, “because they didn’t have professional sign language interpreters.”

“The other thing was they struggled to socialize with other deaf people and enrich their own language skills.”

After the latest workshop, which ran May 22 to May 26, Ritchey could see how participants were signing more fluently or freely.

Services have gradually improved over the years, she noted. Nunavik’s justice committee, for example, now has a professional sign language interpreter they can bring in as needed.

In Nunavik’s schools that host deaf students, special education technicians work one-on-one with students to try and teach them sign language as soon as possible.

“We have generally tried to offer one signing course a year in that community,” said Mary Kaye May, director of complementary services at Kativik Ilisarnilirniq.

“There is not as much support as we’d like,” she said. “But we try very much to have [deaf students learn] in their grade level.”

The interview with Daina Lizzie Iqaluk was interpreted by Donna Vann and Linda Ritchey.