“They don’t respect us, so why should we respect them?” 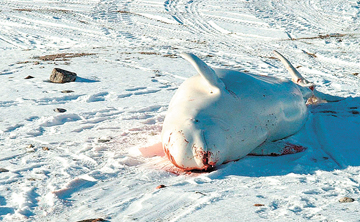 Hunters from Kangirsuk, Aupaluk and Tasiujaq landed seven belugas in Quaqtaq, but the DFO said they had to leave them behind in the community because the beluga hunting season was already closed in Hudson Strait. (FILE PHOTO)

The men had hunted seven belugas Nov. 7, after a huge herd of 200 adult belugas passed nearby Quaqtaq.

But when they landed the whales, inspectors with the Department of Fisheries and Oceans, who had been tracking the hunters by helicopter, were on hand to meet them.

The beluga-hunting season was closed, they told the hunters.

And they told the seven hunters from Kangirsuk, Tasiujaq and Aupaluk to leave all their beluga meat and mataaq in Quaqtaq for distribution within community.

The hunters were then taken to the local Kativik Regional Police Force station for questioning.

Rhoda Ezekiel, the chairperson of Quaqtaq’s hunters and trappers association, says the hunters believed that they could still hunt belugas.

The DFO closed the Hudson Strait to beluga hunting Nov. 3 — ahead of the Nov. 30 date spelled out in Nunavik’s beluga management plan — because the overall quota for the fall hunt in the Hudson Strait had been surpassed.

But these hunters’ communities still hadn’t caught their quota of beluga, with DFO statistics showing each community in question still had a quota of four belugas, that is a total of 12 for the three communities, left for the fall beluga hunt in Hudson Strait.

So they believed that the Nov. 30 date for the closure of beluga hunting in Hudson Strait didn’t apply to them.

Ezekiel said she went down to speak to the DFO inspectors after the belugas were seized.

They told her that the only place Nunavik’s beluga hunt remains open is in James Bay and around Long Island, nearly 1,000 kilometres away from Hudson Strait.

“Will they transfer the hunters in their helicopters? I don’t think so,” Ezekiel said.

The DFO inspectors also went to the Quaqtaq airport Nov. 8 when some of the hunters returned home, to make sure they didn’t take any beluga with them, said Ezekiel, calling that action “too much.”

Hunters do try to follow the rules, she said.

But often they receive confusing information, or the DFO poorly communicates information, by not, for example, speaking to her when they arrived in Quaqtaq.

As for the hunters, she says they avoided hunting any females and calves, as stipulated in the beluga management plan.

Instead, the hunters waited until the adult herd arrived, Ezekiel said.

She explained that beluga migrate past Quaqtaq in an organized fashion, with the leaders arriving first, then the females and calves, and finally the adult males.

“When they do their best, and the DFO does something like this, for some people, they say ‘they don’t respect us, so why should we respect them?” she said.

If hunters in Nunavik were allowed to hunt near their own communities, these kinds of situations wouldn’t arise, because hunters would manage the local hunt themselves, Ezekiel said.

But that’s not the way the beluga management plan now works.

The plan says that Nunavik beluga hunters could take 315 belugas in 2012 — the same number as in 2011, the first year of the plan.

But, because of closures and limited quotas in eastern Hudson Bay and Ungava Bay, the plan obliges most Nunavik beluga hunters to travel to Hudson Strait, where there are plenty of belugas, to hunt some of their community quota.

Those restrictions covering when and where belugas can be hunted have previously come under fire, with hunters in Inukjuak complaining last year that they invested thousands of dollars into the beluga hunt to travel to Hudson Strait, only to return mostly empty-handed.

In Quaqtaq, where hundreds of beluga migrate past the community in the spring, local hunters had already taken 30 belugas — five more than their 2012 quota.

Despite the large numbers of belugas passing by, local hunters weren’t taking any more, Ezekiel said.

Although Quaqtaq welcomed the distribution of the hunters’ seized meat and maktaaq, Ezekiel said “it’s very sad for us.”

“It’s really confusing because of the agreements they [the DFO] make, the deadlines they make, the rules and regulations and we try to follow them,” she said.

“But we’re Inuit and we naturally hunt without restrictions.”

This isn’t the first time there have been clashes between the DFO and Nunavik beluga hunters: several hunters were arrested in 2005 and 2006 for hunting beluga when the hunting season had closed.

The DFO has not yet responded to a Nunatsiaq News request for information about the beluga seizures.