The goal: “to help reduce the risk to the conservation of marine mammals” 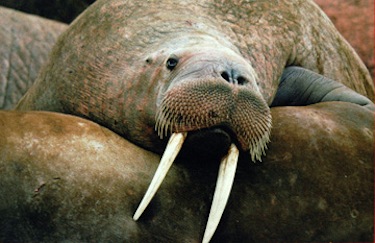 The Department of Fisheries and Oceans is proposing new regulations which would see people keeping their distance from walrus. (FILE PHOTO)

Keep your distance from marine mammals, that’s the new rule proposed for whale, seal and walrus watchers from the federal Department of Fisheries and Oceans.

“There is evidence that the presence of marine mammal watching vessels disrupts the normal activities of the animals in the short and long term,” says a policy statement published this week in the Canada Gazette along with the amendments to the Marine Mammal Regulations. “The large number of vessels that approach marine mammals too closely, move too quickly, operate too noisily, or pursue animals has a consequence on the life processes for whales and other marine mammals by changing the behaviour of targeted species.”

The changes will come as welcome news to some Hunters and Trappers Organizations in Nunavut, such as the HTO in Igloolik, which banned walrus-watching in 2008 because they feared the outfitter-operated tour boats were scaring the walrus.

The DFO has proposed amendments to the Marine Mammal Regulations which toughen those up the existing regulations and replace difficult-to-enforce voluntary guidelines now in effect.

The proposed amendments, which define disturbance as approaching a marine mammal to feed it, swim with it, interact with it or cause it to move, will benefit the animals by reducing disruptions caused by marine mammal watching activities, the DFO says.

The new regulations are intended to help marine mammals communicate, move, mate, feed and care for their young, and “reduce the risk to the conservation of marine mammals,” the WFO says.

The regulations, which will apply to all 83 species of whales, dolphins and porpoises and seals in Canadian waters, introduce a minimum approach distance of 100 metres to marine mammals.

The DFO says a 100 m-approach distance is appropriate in most circumstances “without unnecessarily restricting the public from enjoying the benefits of marine mammal viewing.”

Commercial vessels that are in transit are exempted from these proposed regulations, it says.

But in the case of walrus the proposed minimum approach distance could be up to three times larger, depending on the circumstances.

The minimum approach distance would be 100 m on water when walrus are “most able” to respond by changing course, or diving.

The approach distance would be increased to 200 m when walrus are hauled out on floating ice, when increased risk of injury to calves or smaller animals as adults return to the water, the DFO says.

The distance would be increased to 300 m when on the shore or on consolidated ice, because walrus are resting and they have only one escape option (back to water) and the risk is greatest then that calves may be trampled.

The principle for determining the approach distance to walrus depends on how well a walrus can escape without injuring smaller animals, the DFO says.

This new approach distance also addresses disturbance caused by ships when walrus are on land-based haul-outs.

There have been examples of haul-outs being abandoned as a result of increased vessel traffic in the vicinity, the DFO notes.

The amended regulations would also introduce a ban on flight manoeuvres, including landings, take-offs and changes in the course or altitude of the aircraft, that are intended “to bring the aircraft closer to a marine mammal or to otherwise disturb it.”

This prohibition would be apply when an aircraft is flying at less than 304.8 m (1,000 feet) within a one-half nautical mile radius of the marine mammal but it wouldn’t apply to commercial aircraft operating on a scheduled flight plan.

There are other exceptions made for people who are authorized to hunt marine mammals, for employees of DFO, the Canadian Coast Guard, the Parks Canada Agency or the Department of National Defence, members of the Canadian Forces and peace officers.

Comments on the proposed regulations can be made to the DFO within 60 days of March 24, when the regulations were published.