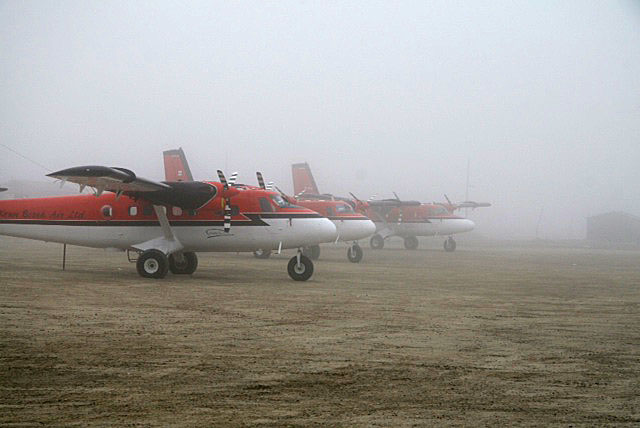 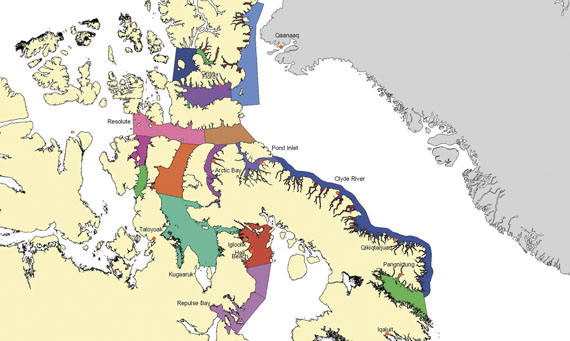 Getting an accurate count on sea mammals that flourish in some of the Arctic’s coldest waters, where they’re hidden by ice and fog for much of the year, is a challenge that the department of Fisheries and Oceans Canada will attempt to meet this month.

Three Twin Otters outfitted with an array of cameras are doing just that, each one manned by a crew of five who are crisscrossing the summering ranges of Nunavut’s biggest sea mammals: narwhal, bowhead, and beluga whales.

The DFO “has never done anything of this scale for marine mammal surveys in the Arctic before,” said Kevin Hedges, project leader for the survey.

The High Arctic Cetacean Survey, as the DFO calls it, covers most of Nunavut’s Arctic archipelago, making the most of the August minimum ice season to catch the whales on camera in aerial surveys.

Based out of Resolute Bay for the month-long survey, the DFO’s three Kenn Borek Twin Otter planes first took to the air from the High Arctic community on Aug. 1.

The airborne surveyors flew north in week one of the survey, and covered the coastal waters of Ellesmere Island.

Fly-overs extended south from the Northwest Passage in the middle of the month, and will continue until Aug. 26, reaching as far south as Repulse Bay in the west, and Cumberland Sound in the east.

The DFO hopes to get a best ever population estimate of the Arctic whale species in Nunavut, said Hedges.

“We’ve never flown a survey over an entire area, in a given year. That’s one of the criticism we’ve run into in the past,” he said.

Surveying different areas at separate times, scientists could never be sure that animals have simply shifted from one area to another — leading to double-counting, or possibly missing whole groups of animals altogether.

“By flying the whole area in a short period of time, hopefully we should get a better idea of what the overall population is.”

Staffed by a crew of five scientists each, the planes take to the air once every three days, Hedges said, allowing for bad weather.

He reported that flights had been held up by a few bouts of heavy fog earlier in the month, which simply altered some of the groups’ flight plans but caused no delays.

Once the aerial survey is done, researchers will be in for a monumental job sorting through scores of digital photos.

“The number of photographs is going to be monstrous,” said Hedges. “We’ll start going through that, and the records observers have made.”

The DFO will release the first results of the survey in March 2014, he said, and follow through with more detailed studies the following year.