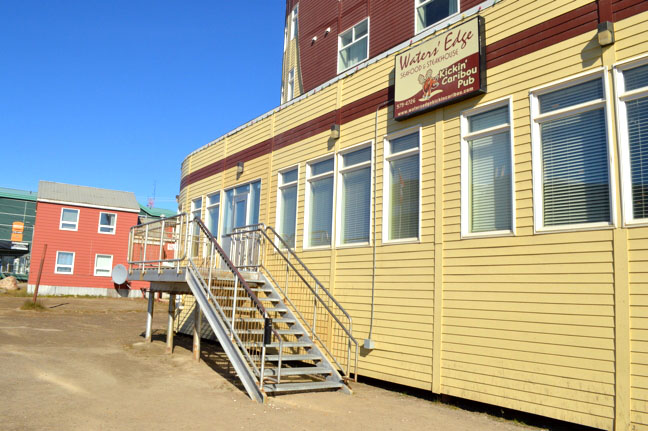 The owners of the Waters’ Edge restaurant and Kickin’ Caribou pub will vacate the Hotel Arctic by Aug. 20. However, there’s a change that may be entitled to damages if an appeal they’ve launched proves successful. (FILE PHOTO)

The owners of Waters’ Edge Seafood and Steakhouse restaurant and the Kickin’ Caribou pub in Iqaluit are likely to seek damages instead of attempting to prolong the life of their soon-to-be-closed restaurant, through an appeal challenging a recent ruling on the duration of their lease at the Hotel Arctic.

Shelia MacPherson, the lawyer representing the hotel’s owner, Northview Apartment REIT, formerly known as Northern Property REIT or NPR, told Justice Susan Cooper at the Nunavut Court of Justice July 26, that her client was served notice of the appeal following the July 14 release of a civil court decision.

Sisters Kim and Donna Waters, who co-own the Water’s Edge, claimed that their lease with the hotel allowed them to negotiate a lease extension until 2023, rather than an expiration in August this year.

But Justice Paul Bychok disagreed, calling the owner’s argument “disingenuous” after conflicting testimony was heard during a three-day civil trial.

The litigation briefly threw into chaos plans by NPR to sell the hotel to an undisclosed buyer.

The unnamed buyer agreed to the hotel’s sale on the condition that the restaurant would vacate the building by the end of August—under the terms of its lease.

“After this Friday, the only issue will be, if [the Waters] are successful in this appeal, will be damages,” MacPherson told Cooper.

Cooper set the matter over to be spoken to in court Nov. 15.

Meanwhile, the Water’s Edge and Kickin’ Caribou pub confirmed that the restaurant will run out its current lease and continue to operate in the building until Aug. 20.

But the hotel itself will be closed by the end of July, after the building his handed over to its new owners July 28.