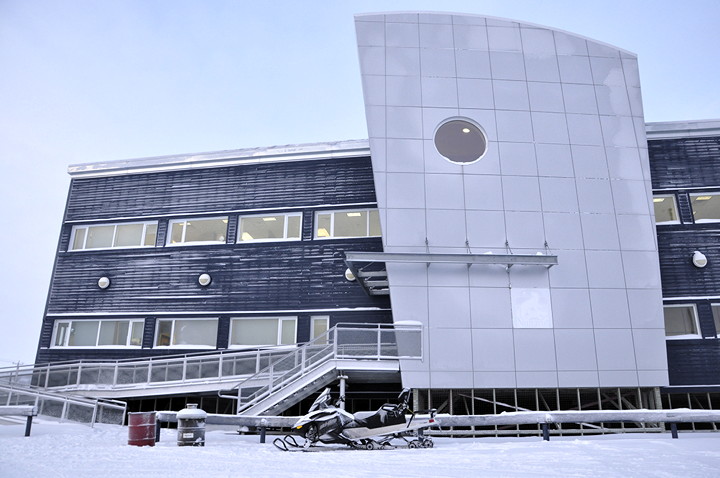 The Government of Nunavut building in Igloolik: a week-long coroner’s inquest into the death of Solomon Uyarasuk in police custody in 2012 moves from the community hall to this building Nov. 26 to accommodate videoconference testimony of RCMP arresting officers. (PHOTO BY THOMAS ROHNER)

IGLOOLIK — The autopsy report on Solomon Uyarasuk, found dead in an RCMP jail cell in Igloolik two years ago, confirms the findings of an external police investigation: that the young man died by “self-suspended hanging.”

That was the conclusion of forensic pathologist Christopher Mark Milroy, the man who conducted the autopsy on Uyarasuk’s body, when he testified at a coroner’s inquest into Uyarasuk’s death Nov. 25 in Igloolik.

“In my opinion… the cause of death was hanging, which is a formal medical cause of death pathologists give,” said Milroy on the second day of what is expected to be a week-long inquest.

A coroner’s inquest is a quasi-judicial public hearing held to determine the circumstances surrounding a death and to make recommendations on how to avoid similar deaths in future. Such an inquest is mandatory when a death occurs in police custody.

On the first day of the inquest, an investigator with the Ottawa Police Service, who lead an investigation into the RCMP’s conduct in the early morning hours when Uyarasuk died, told the six-person jury that Uyarasuk was found hanging from a nylon belt suspended from the lower half of his cell door.

The injuries found on Uyarasuk’s neck, Milroy testified, indicate a “self-suspended hanging,” meaning the force used in the hanging came from Uyarasuk and not somebody else — such as in cases involving strangulation, for example.

Other injureis Milroy found on Uyarasuk — a black left eye, abrasions and bruises scattered around his neck, face, forehead and wrists, and a cut on his forehead — are consistent with accounts that RCMP arresting officers told external OPS investigators, Milroy said.

Although the officers who arrested Uyarasuk Sept. 23, 2012, have not yet testified, their description of events that night, and some of their actions, have been revealed by other witnesses at the inquest.

So far as we know, this is what happened that night.

That complaint came from Uyarasuk’s neighbour, David Nutarakittuq, who testified at the inquest Nov. 24.

Nutarakittuq said he and his wife were woken up by loud banging sounds early that morning and, after waiting for half an hour to see if his neighbour would quiet down, called the RCMP.

“It sounded like they were in our living room,” Nutarakittuq said, adding Uyarasuk had never been that loud or wild before.

“It sounded like three or four people,” he said.

But Phillip Qanatsiaq, Uyarasuk’s friend, who was in the apartment with Uyarasuk at the time, testified that the two men were the only ones next door that night — drinking, playing guitar and singing.

“We were having a good time,” Qanatsiaq said.

After consuming three forty-ounce bottles of over-proof liquor, the pair turned an amplifier — Qanatsiaq called it a “speaker” in testimony — plugged into their guitars to full blast. That’s when the RCMP came knocking, he said.

Uyarasuk turned down the music, as the RCMP requested, but then became verbally abusive towards the police, Qanatsiaq testified.

Qanatsiaq said he tried to calm his friend down but Uyarasuk turned on Qanatsiaq and attacked him. Police then tackled Uyarasuk to the ground, pinned him there and put handcuffs on him.

The two officers led Uyarasuk out to an RCMP truck, one officer on either side, Qanatsiaq said.

The nurse on call from the Igloolik health centre that night, Shane Calder, received a call around 6 a.m. from Const. Greg Murphy, one of the two officers who arrested Uyarasuk, Calder testified Nov. 25.

Murphy explained that an “aggressive” and “violent” prisoner, recently detained for a domestic disturbance, was injured and needed to be assessed, Calder said.

But when Calder arrived at the detachment, he, and the accompanying officer, discovered Uyarasuk hanging from the meal slot door of a cell by a “black cord.”

Calder tried to resuscitate Uyarasuk, helped by an RCMP prison guard, Paul Hedges, who arrived at the detachment for a shift shortly after the nurse.

Milroy testified that Uyarasuk had a blood alcohol concentration level about double the legal driving limit — enough to potentially induce an emotional state, but not enough to prevent Uyarasuk from carrying out a “self-suspended hanging.”

“But the psychological state of people… cannot be determined by my examination,” he told the jury.

After testimonies wrapped up Nov. 25, members of the media, and some of Uyarasuk’s family, gathered at the front of the Igloolik community hall, where photographs introduced into evidence were made accessible to the public.

The photographs showed the scene of Uyarasuk’s death — including Uyarasuk lying in his cell — as well as pictures from the autopsy.

Uyarasuk’s family huddled close together as they leafed through the images, some returning to the back of the room, crying quietly.

At one point a family member asked if both sets of books could be viewed by the family. Reporters complied, retreating to the back of the room to allow family members to grieve in private.

The inquest’s third day goes ahead Nov. 28, with the RCMP members on duty at the time of Uyarasuk’s death expected to testify via videoconference.