Privatized care facilities not yet covered by Nunavut’s language laws 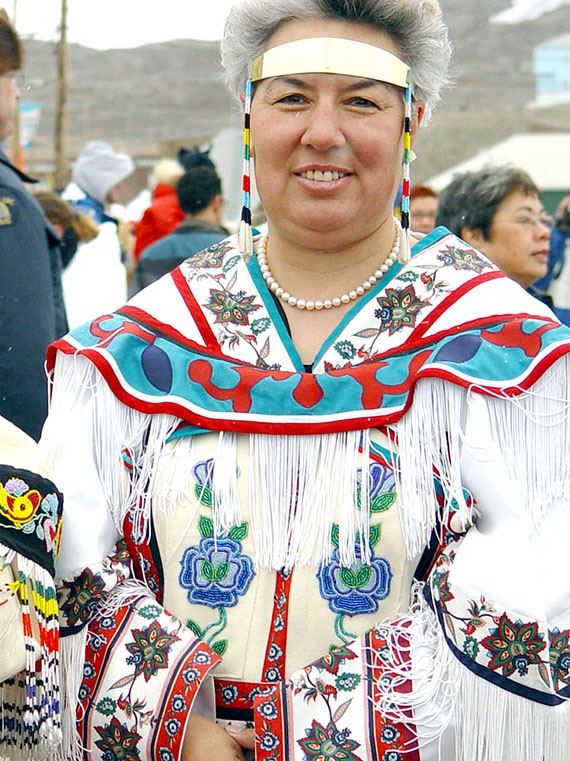 Manitok Thompson, a former Northwest Territories and Nunavut MLA and cabinet minister, said unilingual Inuit elders living at the Embassy West Senior Living care home in Ottawa do not appear to be served by any caregivers who speak the Inuit language. But the Office of the Language Commissioner of Nunavut is not allowed to investigate her complaint. And even if the privately-run care home were located within Nunavut, the language commissioner would still be unable to investigate the issue. (FILE PHOTO) 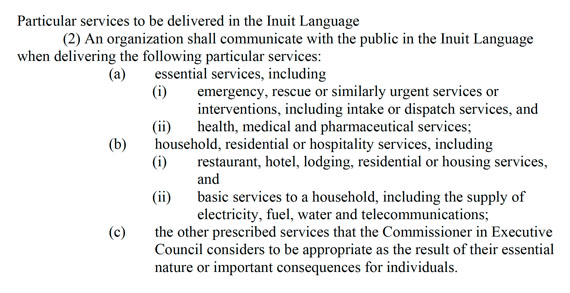 These are the words in the Inuit Language Protection Act that could protect the language rights of unilingual Inuit elders, and others, who receive privatized services from third-party businesses, such as care homes, that operate under contracts with the Government of Nunavut. But these words, from section 3 of the Act, have not been brought into force by the Nunavut cabinet. That means the Office of the Languages Commissioner of Nunavut is not allowed to investigate any complaints related to health and accommodation services offered by private businesses.

If you’re a unilingual Inuit elder living in a care home run by a private contractor and you can’t get service in the Inuit language, you can complain to the Office of the Languages Commissioner of Nunavut, right?

Unilingual Nunavut elders—and others— who live in privately-run care homes and other facilities inside or outside Nunavut, do not yet enjoy the protection of the Inuit Languages Protection Act.

And that means the Office of the Languages Commissioner cannot investigate your complaint.

Manitok Thompson, a former Northwest Territories and Nunavut MLA who served in the Nunavut and NWT cabinets from 1995 to 2004, found that out the hard way last week.

Concerned about the absence of Inuktitut-speaking caregivers for Nunavut elders living at the Embassy West Senior Living care home in Ottawa, Thompson contacted the languages commissioner’s office, where her complaint was handled by a non-Inuk research officer.

“I know an 80-year-old from Coral Harbour who doesn’t have any English who was brought there [to Embassy West] and an old man from Pangnirtung who died there and his relatives didn’t even know he had died, because they had gone there to visit him and they were told, ‘no, he passed away,’” Thompson said in an interview with Nunatsiaq News.

“Another elder told me he was not served in Inuktitut, nothing. And then he passed away.”

Thompson, who now lives in Carleton Place, a small town just outside Ottawa, said the elders who spend the last days of their lives at Embassy West are served by interpreters only when they are seen by doctors.

But for most of their time there, those elders the Government of Nunavut has shipped out to Ottawa—many from small communities where for most of their lives they’ve had limited contact with Qallunaat—don’t see any Inuktitut-speaking attendants or personal care workers.

Nor do they get much country food, the only diet they enjoy. Instead, they get institutional food that tastes like plastic or paper, Thompson said

“When you’re an Inuk who has never spoken English and you were born in 1924 or 1930—at that place there, they don’t serve you in Inuktitut—or give you country food, or talk to you in Inuktitut. It must be very lonely.

“I know there’s an old man from Kugaaruk—he would be about 90 years old, I would think—he was born before white people came up, the priests and nurses,” Thompson said.

She said Embassy West, located in a former hotel just west of downtown Ottawa, is a “good place,” well-equipped and capable of offering good services and activities to English speaking clients.

However, she believes the loneliness and isolation there must be unbearable and may be shortening the lives of the elders who the GN ships to the south.

“We have a word in Inuktitut, “sujuktuq.” It means if an old person, when you hurt their feelings, with harsh words or something, if they suddenly die or if they die fast,” Thompson said.

But the Nunavut language commissioner’s office told Thompson her complaint is “inadmissible.” (See letter embedded below.)

That’s partly because Embassy West care home is located outside Nunavut. Though the Embassy West business provides a service to Nunavummiut under a contract with the GN, the languages commissioner does not have jurisdiction over it.

“ I am so disappointed for the elders all outside the territory and the office can’t help them,” Thompson said.

But even if those elders were living at a care home inside Nunavut, the languages commissioner would still have no power to investigate.

“They are currently not legally required to provide services in all the official languages,” the letter said.

And that’s because a big, important section of the Inuit Language Protection Act, section 3, is still not in force.

That’s the section of the ILPA that lists the particular services that organizations, whether public or private, must offer in the Inuit language, including health, medical and pharmaceutical services.

According to the GN’s Uqausivut plan for carrying out its two language laws, released in 2012, the Nunavut cabinet was supposed to have ordered that section 3 be brought into force by 2015.

But that hasn’t happened yet.

But some other major sections, such as section 3, are still words on paper that do not have the force of law.

That means that if you’re a client of any type of privately-owned facility that provides a service under a GN contract, you do not enjoy the protection of the ILPA.

“Sections 3-5 of the Inuit Language Protection Act (ILPA) are not yet in force, in order to give sufficient time to businesses to prepare their compliance,” a GN spokesperson told Nunatsiaq News in an emailed response to a series of questions sent to to GN departments, Executive and Intergovernmental Affairs, and Culture and Heritage, as well as to the offices of the premier and the Languages Commissioner of Nunavut.

“When Uqausivut was approved, the plan indicated that these sections could come into force within three years. Culture and Heritage (CH) is working to have these sections and appropriate supports in place within the coming months,” the spokesperson said.

The GN spokesperson also said Embassy West “is making efforts to provide language services and activities during residents’ waking hours by having a combination of a bilingual staff and a bilingual elder present during the week.”

The Embassy West facility already uses interpreters from the Ottawa Health Services Network Inc., the GN said, but they will soon acquire a full-time worker who speaks the Inuit language.

It’s not clear how many unilingual Inuit elders are now spending the last days of their lives at care homes in southern Canada, either because of a shortage of spaces in Nunavut or because they suffer from serious conditions, like Alzheimer’s disease, that the GN’s health department cannot handle.

Nunatsiaq News has sent a long list of questions on this issue to the Department of Health. When we receive their answers, we will publish a follow-up article.