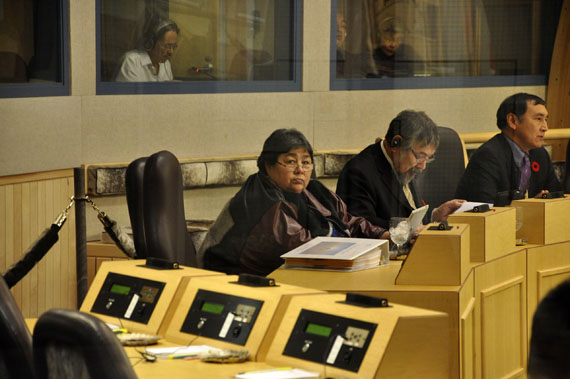 Health Minister Monica Ell in the Nunavut legislature Nov. 6. Ell said she has ordered an immediate third-party review into allegations concerning a former nurse-in-charge at Cape Dorset and how her department handled the situation. (PHOTO BY THOMAS ROHNER)

Nunavut Health Minister Monica Ell has ordered an independent third party review into allegations that Nunavut’s health department bungled its handling of a former Cape Dorset nurse who attracted numerous complaints from co-workers and patients over a period of about three years.

“The external independent review will provide information as to what processes the department should or should not take,” Ell said in reply to a question from South Baffin MLA David Joanasie.

Ell announced the review in the legislature in Iqaluit Nov. 6 after a lengthy multi-media feature story, by a seven-person CBC News team led by Toronto-based producer-writer Amber Hildebrandt, was broadcast and published on the internet.

The story alleges that the Government of Nunavut put the community’s health at risk by promoting a nurse, whose licence had been restricted by the Registered Nurses Association of the Northwest Territories and Nunavut, to an acting nurse-in-charge position.

The story also alleges the nurse was the object of repeated harassment complaints filed by co-workers and may have mishandled her response to a three-month-old baby who in April 2012 died of a viral infection in his lungs.

A Jan. 9, 2014 email to colleagues, posted by CBC and available to the public on the internet, Roy Ingangasuk, a new regional director of health, suggests that by then, GN officials were becoming aware of the serious issues raised by the baby’s death.

“I believe we missed the boat on this file after the death of the infant,” Ingangasuk wrote. “Another nurse had to make an official complaint surrounding the unfortunate death of the infant and our region/department did not do due diligence regarding the serious incident. Your thoughts please?”

And the story alleges that a whistle-blowing nurse, Gwen Slade, who now lives in Ontario, was suspended in early 2012 after filing complaints about the controversial Cape Dorset nurse, who was her supervisor.

The Nunavut-NWT nursing association later ordered that the controversial nurse not be allowed to provide health care to children under 10, except in emergencies.

A June 8, 2012 letter from Heather Hackney, a director of health based in Pangnirtung, to the Nunavut-NWT nursing association, said the government was aware of the nurse’s licence restriction and was making “suitable adjustments to the tasks to which she will be assigned.” That email is now available to the public on the CBC website.

But the nurse continued to work for the GN until about mid-2014 and was put in charge of the Cape Dorset health centre. The nurse no longer works in Nunavut, CBC reported.

“The issues raised in this news story are troubling, about the manner in which the government handled concerns about the services being provided at the [Cape Dorset] Health Centre,” Joanasie, who tabled the CBC story as a document in the legislature, said in a member’s statement Nov. 6.

In a rare moment at the legislature, Ell denied unanimous consent for Joanasie to finish his statement after his time ran out, and was the only MLA to do so.

In what is perhaps the most serious CBC allegation, the story — supported by a video interview with the child’s mother that is posted on the internet — describes how in 2012 the nurse instructed the young mother to bathe her sick child rather than bring him into the health centre.

The baby died the following night.

A January 2014 email to other health officials written by Elise Vanschaik, an acting regional health programs director for the GN in the Qikiqtani region, recommended, after consulting other regional officials, that the nurse be terminated.

“There is no margin of error when it comes to a human life,” said the email.

Vanschaik also recommended an investigation into the actions of another GN official — a regional director of health who she accused of “numerous alleged failures.”

That included failing to adequately supervise the controversial Cape Dorset nurse and not informing others that the nurse’s restricted licence did not allow her to provide care to patients younger than 10.

“I do not expect the minister to go into the details of any ongoing investigation,” Joanasie said to Ell during the legislature’s question period,

“However, I would like her to indicate to the house what lesson the department has learned from this unfortunate experience.”

Ell replied that she has ordered the external independent review.

“I have directed my officials at the department of health to immediately conduct an external independent review of the administrative processes of this case,” Ell replied.

Many of the incidents described in the story occurred in 2012 and 2013 when Peter Ma, now president of Nunavut Arctic College, served as deputy minister of health and Cambridge Bay MLA Keith Peterson served as minster of health.

A February 17, 2012 letter signed by Ma as deputy minister informs whistle-blowing nurse Gwen Slade that she is suspended for harassment and “undermining your supervisor.”

This occurred after Slade, also a nurse in Cape Dorset, had filed complaints about the supervising nurse at the centre of the allegations.

Ell has held the health minister’s position since November 2013.

Joanasie also asked if Ell would consider setting up some form of independent mechanism to review concerns at community health centres.

“It is important that health care professionals and ordinary Nunavummiut are not afraid to raise concerns in good faith about the quality of health care in our communities,” Joanasie said.

“What message does the minister have today… about this issue?”

“The well-being of all Nunavummiut and the level of service that we provide in all our health centres are vital,” Ell replied.

Ell did not provide a timeline in the legislature for this review, besides saying that it would begin “immediately.”