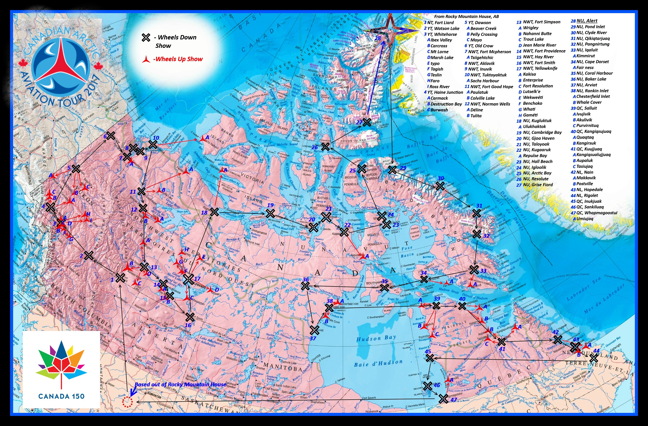 A map showing “wheels up” and “wheels down” stops on this summer’s Canadian Arctic Aviation Tour. (PHOTO COURTESY CAAT) 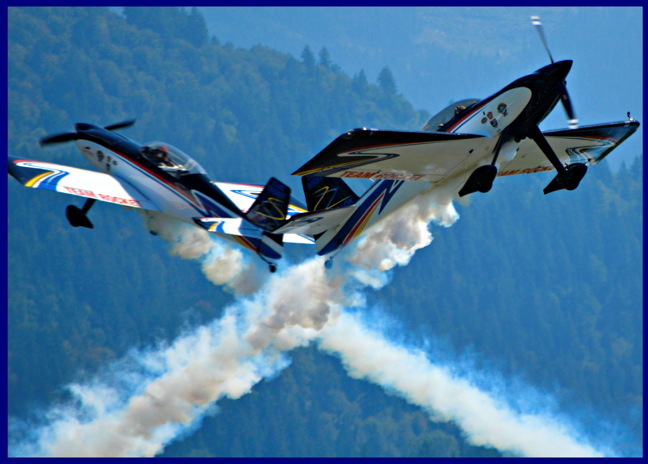 Team Rocket Aerobatics, with pilots Eric Hansen and Ken Fowler, will be part of this summer’s aviation tour of the Arctic. (PHOTO COURTESY OF CAAT)

A pan-northern Arctic airshow this summer with stops in a whopping 97 communities across the Arctic—quite possibly the most ambitious northern aviation tour ever—will wind up in Iqaluit Aug. 18 to coincide with the grand opening of the new Iqaluit International Airport.

The airshow tour, two years in the making and estimated to cost about $5.6 million, was organized by a group of aviation buffs in Rocky Mountain House, Alberta, as a way to celebrate Canada’s 150th birthday and the long and storied history of Arctic flying.

Nancy McClure, volunteer executive director of the Canadian Arctic Aviation Tour 2017, told Nunatsiaq News Jan. 20 that organizers were planning to end the tour a little earlier in August for weather reasons but the Iqaluit airport authorities wanted the airshow to coincide with the new airport’s opening events, none of which have yet been made public.

“It’s a passion project. It’s daunting but this is going to be one of the most amazing things I’ve ever been involved in and I’ve had great life experiences,” said McClure, who spent a year as a pilot in Rankin Inlet decades ago and retains an affection for north of 60 flyers.

“This project is about everything that should be important to all Canadians—it’s about heritage, culture, education, social justice and national pride. That, to me, is my goal.”

Sponsorships and final dates for this event will be disclosed when the tour is officially announced on April 19, but McClure said funding will come from a combination of government and corporate sources.

Starting in Fort Liard, B.C., on June 2, the airshow will move across the Yukon and Northwest Territories, pass through mainland, High Arctic and Baffin Island communities in Nunavut, including Sanikiluaq, and then continue on to Nunavik and Nunatsiavut.

“We wanted to make sure we included all the Inuit self-governing areas so we’ve received a lot of enthusiasm out of [Nunavik and Nunatsiavut] because it’s something they don’t get a lot of, when events come,” McClure said.

Obviously, the logistics of such an event have been monumental—from securing Transport Canada permission to getting aviation fuel to each community in advance and getting the go-ahead from varying levels of government.

Each airshow will last 1.5 to two hours and will have a minimum of six planes, and many will include more than that.

Some communities will get “wheels-up” shows, which means airplanes won’t actually land there, while others will get full “wheels-down” shows where members of the community can meet with pilots.

Air shows will include not only aerobatic displays from the likes of David and Drew Watson and former Snowbird Brent Handy but, wherever possible, military jets and local flyers such as the western Arctic’s Aviation Hall of Famer Fred Carmichael and Nunavik’s legendary Johnny May.

“We need to recognize some of the amazing people who have come out of the North. We would not do this without including those,” she said.

Baker Lake, being the geographical centre of Canada, gets to enjoy a special Canada Day instalment of the show July 1. Baker Lake residents are planning to organize a host of other events to coincide with the airshow.

That will be the case for other communities as well, McClure said. The tour’s organizers have been working with communities to coordinate local festivities they want to hold on the day the pilots come to town.

“It has to have its local flavour. That’s why it’s so ambitious. It’s not like we’re doing 97 airshows and I just have to duplicate each one. These are 97 unique events that we want to make fit in with that community, those people and that culture,” she said.

Details are still being finalized but McClure said the tour will include an educational component to engage local kids and promote careers in aviation. There will even be contests to win aerobatic rides in airplanes.

A film crew will be joining the tour to shoot a television documentary called Arctic Aviators, describing the tour in promotional materials as, “the definitive look at Canada’s North from the air and on the ground as inspired by the greatest aviation tour this country has ever seen.

“The railway may have connected this country from east to west,” the brochure continues, “but it was the airplane that opened the North and it’s the plane that keeps it alive today.”