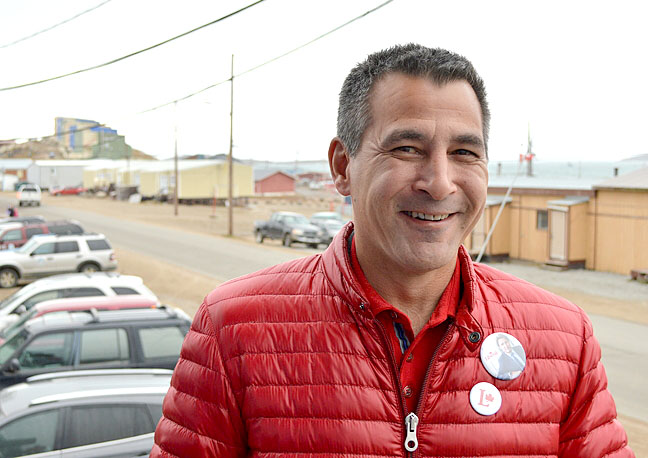 Nunavut MP Hunter Tootoo, the minister of Fisheries and Oceans and the Coast Guard, said April 28 that CETA, the Canada-EU trade agreement that’s expected to be ratified later this year, would give Nunavut commercial fish harvesters better access to the huge European market. “It can’t but help us as the Nunavut fishery grows,” Tootoo said. (FILE PHOTO)

Canada’s upcoming trade agreement with the European Union, which eliminates tariffs on nearly all Canadian seafood products, could provide a major boost to Nunavut’s commercial fish harvesters, Nunavut MP Hunter Tootoo, the minister of Fisheries and Oceans and the Coast Guard, said April 28 from Brussels, Belgium.

The Comprehensive Economic and Trade Agreement between Canada and the EU, known more commonly as “CETA,” is expected to be ratified and signed later this year and implemented some time in 2017.

Its elimination of tariffs and duties on numerous Canadian products would give Canadian exporters a competitive advantage in Europe for their goods.

“I think the CETA agreement will be beneficial not just to Nunavut fish harvesters, but to fish harvesters and seafood producers through aquaculture all across the country,” Tootoo told reporters at a news teleconference.

Tootoo visited Brussels April 26 to April 28 this week to promote Canadian seafood products at the Seafood Expo Global and to meet with EU and industry officials for discussions on CETA, illegal fishing, Indigenous seal products and a proposed Swedish ban on Canadian live lobster exports to Europe.

“This gold-standard agreement will benefit both our economies and deepen the already strong trade and investment relationship we share,” Freeland said April 21 in a joint statement with EU officials

Right now, the dollar value of Nunavut’s fishery is small compared with Canada as a whole.

But for Canada as a whole, seafood is a big business, worth $6 billion in exports last year and employing 76,000 people in harvesting, processing and aquaculture, Tootoo said.

“So once those tariffs are gone, we will have much more opportunity to enter into the market on a much more competitive basis, along with the fact that the Canadian brand of fish and seafood is one of the best in the world,” Tootoo said.

That growth in the production and sale of seafood would include Nunavut.

“It can’t but help us as the Nunavut fishery grows, if you have more market access and more demand for your product,” he said.

Right now, the average tariff that European importers pay on Canadian shrimp ranges from 12 per cent for frozen shrimp up to 20 per cent for peeled shrimp, a Library of Parliament document said.

Eliminating those kinds of European tariffs would give Nunavut and all other Canadian producers better access to the world’s largest market: 500 million people and 28 countries, Tootoo said.

Tootoo also discussed the sealing issue with EU officials during his Brussels visit and praised them for the Indigenous exemption to the EU’s seal product ban, which is intended to provide access for Inuit-harvested seal products, in spite of the EU’s ban.

“The fact that they’re recognizing the importance of engaging and dealing with Indigenous people of the Arctic is a positive step forward,” Tootoo said.

“We were able to get the indigenous exemption over here and our market certification program and our access program. They were very supportive of that and continue to try and expand that market and ensure that we capitalize on that exemption as much as we can,” he said.

Tootoo also signed a joint statement with EU officials that pledges a crack-down on illegal, unregulated and unreported fish harvesting and he lobbied against a proposed ban, led by Sweden, on North American live lobster exports to Europe.