“It’s frustrating for the average person” 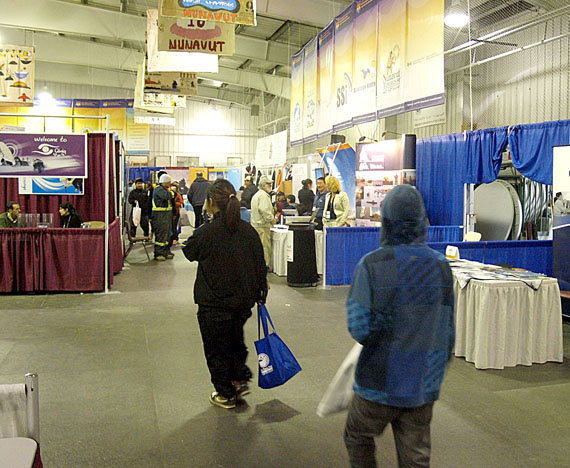 The Nunavut Trade Show, which wrapped up this past week, tied up the ice surface at the Arctic Winter Games arena for more than three days. Some Iqaluit city councillors are unhappy at the disruptions to recreational users and mulling whether the city should continue donating use of facilities like the AWG to conference organizers. (PHOTO BY CHRIS WINDEYER)

Iqaluit’s sports facilities frequently double as conference halls and one city councillor is concerned those events are eating into the time available to residents for hockey or curling.

Conferences and events like the Nunavut Trade Show, which wrapped up at the Arctic Winter Games Arena Sept. 29, are bumping out local athletes “on a regular and disruptive basis,” said Coun. Romeyn Stevenson during a Sept. 27 council meeting.

“It’s frustrating for the average person who would like to have a regular schedule,” he said.

The meeting, with more than 250 delegates expected, will take place at the city’s curling rink over three days next fall.

Morrissey arrived at council seeking an in-kind donation of the curling rink for the duration of the conference.

Waiving the rental fees for three days costs the city more than $5,500. Councillors approved the motion after debating the merits of donating rink space.

Councillors Mary Wilman and Joanasie Akumalik said the city is undercutting its own efforts to raise money for new facilities by letting conference organizers use existing space for free.

Iqaluit wants to build a suite of new infrastructure, including a new pool, fire hall, city hall, arena and recreation centre. The rec centre would contain various rooms suitable for meetings and conferences.

Wilman said the benefits of the economic development conference are “blatantly obvious” but said the city needs a policy governing the donation of facility use.

“It (the donations) obviously makes us uncomfortable but we keep going along with it,” she said.

But Coun. Steven Mansell said the cost to city coffers is worth it.

While Iqaluit has tried to position itself as a conference destination in recent years in an effort to boost tourism, the city still lacks a purpose-built conference centre.

Local hotels can often host such events, but larger ones, like the Nunavut Trade Show, which ran from Sept. 27 to Sept. 29 need the space facilities like the Arctic Winter Games Arena can provide.

Back when the AWG’s concrete floor was sinking into the tundra and couldn’t be used as a hockey rink, there was no problem.