Ever hopeful, TMAC builds case for western Nunavut gold mine 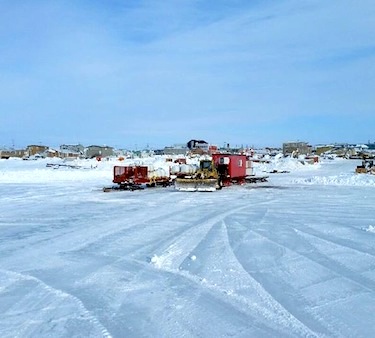 Cement powder heads to the Hope Bay mine from Cambridge Bay earlier this month. (PHOTO COURTESY OF TMAC)

An aerial view of the Hope Bay project. (PHOTO COURTESY OF TMAC)

In what they describe as a “robust” pre-feasibility study, the company said they believe they’re capable of turning three deposits at Hope Bay, including Doris North, into a mining operation that could last 20 years.

Assuming a gold price of US $1,250 per ounce, TMAC estimates the Doris North, Madrid and Boston deposits at Hope Bay could produce 3.2 million ounces of gold over 20 years, with an average annual rate of production of 160,000 ounces.

The company already holds all the permits, licences and agreements it needs to start producing at the small Doris North site.

That’s the section of the property that was expected to move forward in 2012.

Instead, the owner at that time, Newmont Mining Corp., put Doris North into mothballs.

Newmont owns a significant proportion of shares in privately-held TMAC, which acquired the Hope Bay property in 2013 and has been attempting to develop it ever since.

Under TMAC’s pre-feasibility study, Doris North would start producing in 2015.

Because a large amount of infrastructure already exists at Hope Bay, TMAC calculates they could get the operation going with estimated pre-production capital costs of $175 million.

If their projections are correct, TMAC estimates it could produce gold at a total “all-in” cost of $839 per ounce and pay back its investment within 1.7 years.

This past March 15, TMAC signed 20-year agreements with the Kitikmeot Inuit Association that cover Inuit impact and benefits, surface land rights and a “framework agreement.”

Though TMAC has all the permits it needs to start at Doris North, they must still get approvals for Boston and Madrid.

This past March, they began work on a draft environmental impact statement.

The Hope Bay project straddles an 80-kilometre-long greenstone belt, rich in gold-bearing rock, that’s geologically similar to the Abitibi belt in of Quebec and Ontario, which has hosted lucrative mining operations at Kirkland Lake, Val d’Or and Timmins.