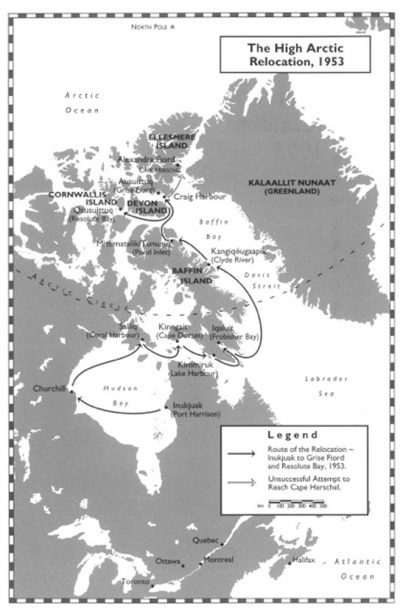 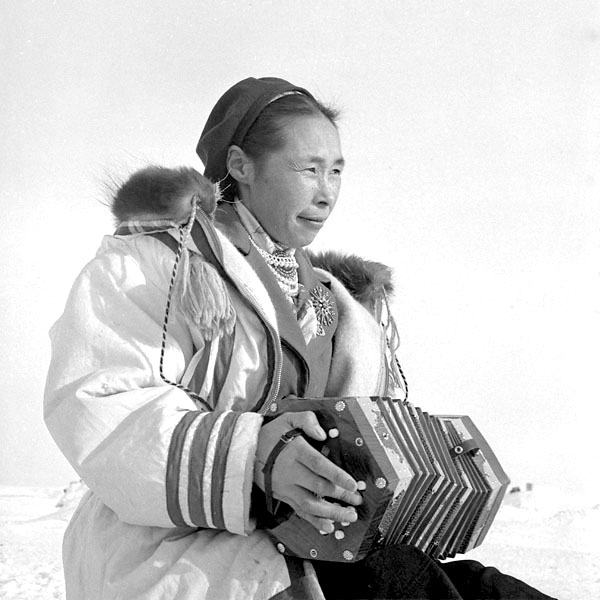 Through Nunavut Sivuniksavut’s Project Naming program, the woman playing the concertina in this archival photograph has been identified as Edith Patsauq, Markoosie Patsauq’s mother, who in 1953 was relocated with her family to Resolute Bay. It’s part of a series of government photos taken during Governor General Vincent Massey’s 1956 visit to Resolute Bay, part of a northern tour in March of that year. (LIBRARY AND PUBLIC ARCHIVES CANADA) 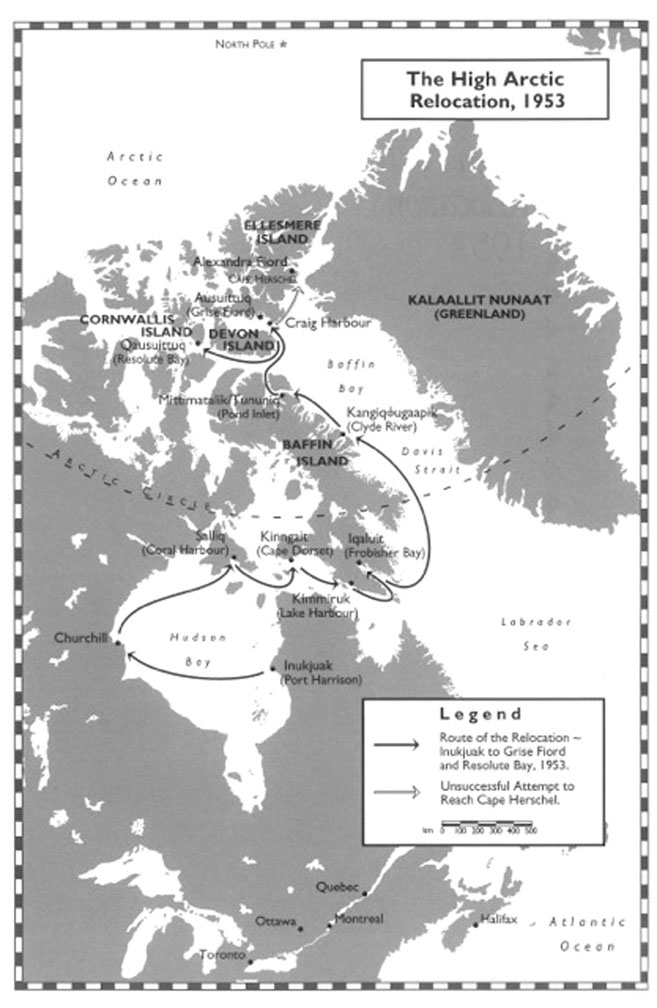 This map shows the long voyage that the C.D. Howe took in the summer and early fall of 1953, when the government vessel carried the first group of High Arctic exiles from Inukjuak to Cornwallis Island and Ellesmere Island. (ROYAL COMMISSION ON ABORIGINAL PEOPLES)

In 1953 and 1955, the federal government relocated more than 90 Inuit from Inukjuak and Pond Inlet to Resolute Bay on Cornwallis Island and to Craig Harbour on Ellesmere Island. Between 1956 and 1962, the families at Craig Harbour moved about 40 miles west to Grise Fiord.

It was on July 28, 1953, that our long and sometimes nightmarish period of exile in the High Arctic began, the day that we shall remember to our dying days.

On that day in Inukjuak, we shook hands with our relatives for the last time. I remember my aunt Minnie crying openly as she hugged her daughter and my mother. Many more women started loudly crying.

It was eerie to hear so many adults crying at the same time. Few encouraging words were spoken.

“We will return in two years.” “We will see each other again soon.” None of those spoken words ever became true.

In one short afternoon, our roots, planted deeply in our homeland, were pulled up and our family life was broken. The loss of homeland and leaving the rest of our families and relatives was the hardest part to bear.

The High Arctic in the 1950s was no place for the aged, the sick, the disabled, the hungry, the helpless and the lost. But in the winter of 1953-54, the first year of our exile in the High Arctic, we were in that precise situation.

As we sailed further north after spending 10 days in Churchill, the days were colder and more icebergs appeared in our path. We were all surprised that icebergs actually existed in the middle of summer.

Then, as we neared Pangnirtung, it was almost like winter, with large patches of ice pans covering the sea. The great mountains of southern Baffin Island appeared out of the fog and the whole sky seemed to open, before our eyes, with its mountains that were reaching halfway to heaven.

And as we travelled toward the High Arctic near the end of August, the lands north of Baffin Island were now already covered with snow. And cold Arctic winds brought cold days, as we neared our final destination of Resolute Bay on Cornwallis Island.

My grandmother, Nellie Amagoalik, was born in the year 1874. Despite her advanced years, when we were still home in Inukjuak, she was in good health and was at her daily labours from dawn to dusk, gathering twigs and tying them to her back and carrying them to the family tent.

She was forever mending boots or preparing meals for the whole family. It seems the only time she ever took time off from her many tasks was when blueberries were ripe for picking.

It was then time for women and children to gather these delicacies from the land and take them home for the enjoyment of the family.

My grandmother was part of everything that we did in our daily lives in our homeland. In the summer of 1953, however, she too was uprooted from our ancient homeland by the Government of Canada.

Ever since we arrived in the High Arctic in the fall of that year, after six weeks of travelling on the ship C. D. Howe, my grandmother’s spirits changed greatly.

She was no longer a pleasant, talkative person and loving grandmother. Her never-ending complaints about the poor choice of food and the land that had nothing to offer had a negative effect on the entire family.

In the High Arctic there are limited varieties and amounts of wildlife. The foods of our people, such as geese, snow geese, eider ducks, ptarmigan and other wild fowl and their eggs, fish of different types, as well as berries from the land, disappeared from our lives the day we landed in the High Arctic.

Like people everywhere, we too hunger for a variety of food and get our energy and health by eating what our body desires. If a person consumes only one certain food for a long period of time, soon his body will begin to reject the food and the person will lose his appetite.

It was especially hard on my grandmother who was continuously crying for fish and ptarmigan.

That first winter there were very few smiles on our faces, as the land seemed to die. We would have faced a serious famine without the white man’s garbage to supplement our poor diet. “When are we going home?” my grandmother would often ask.

But no one could answer her question. It turns out she was one of many in our family fated never to see their homeland again.

Unfortunately, my grandmother was not to recover from her illness and hunger.

Three years later she died, still asking questions about when we would return home. In February 1956, her long life ended thousands of miles away from her relatives and from her original homeland. My mother often used to say that the violent change in environment and a continuous hunger for fish and other foods found only in her homeland greatly contributed to my grandmother’s death.

My mother also said that from the day we landed on the beach of Cornwallis Island until her death, my grandmother seems not to have smiled at my mother even once.