Expansion could be in sight for Iqaluit men’s shelter

“We know that the needs are great in our community for our most vulnerable people,” mayor says 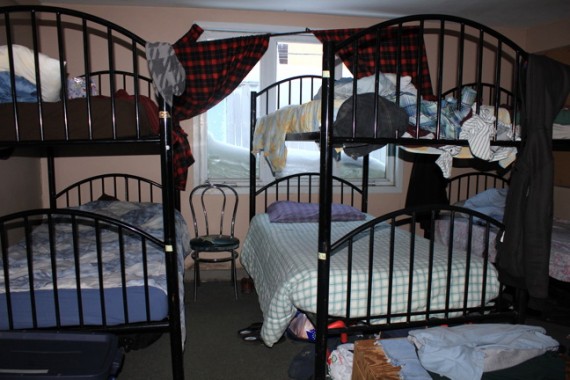 This is one of the rooms at Iqaluit’s men’s shelter. The shelter, run by the Uquutaq Society, is looking to expand through the purchase of two new buildings, and by increasing the scope of its services from being an emergency shelter to also offer transitional housing. (FILE PHOTO)

There is a lot of talk about the need for transitional housing in Nunavut communities. In Iqaluit, that talk could soon become reality.

The Uquutaq Society, which runs the 20-bed Iqaluit men’s shelter on Fred Coman Dr., has its eye on a set of new buildings that it hopes to purchase for a much-needed expansion.

With those buildings secured, the society would increase the shelter’s scope of services beyond being an emergency overnight shelter, to also offer transitional housing, to help prepare homeless clients to live independently.

“We would be putting a lot more programming in place,” said Matthew Clark, secretary-treasurer of the Uquutaq Society. That’s for services like mental-health support, skill development and employment coaching.

If the new buildings are acquired, space at the shelter would more than double.

“The new facility would give us in the 45- to 50-bed range,” Clark said. “There are two buildings that we have seen and walked through with the owner. We see them as fitting our needs very well.”

Clark didn’t want to say which buildings in Iqaluit those are, since efforts to expand the shelter have been ongoing for some years. But he did say that the society plans to hold an information and consultation meeting for the public later on in March.

Still, it’s early days yet, Clark said. Right now, the society is working to organize funding for the buildings, and to line up the feasibility studies and business management plans needed to make sure the project is as sustainable as it is necessary.

“The need is clear. We have 20 beds and on any given night there are somewhere between 35 and 45 men staying at the shelter,” Clark said. “At this point we have no funding on the table but we are hoping to firm that up.”

Clark spoke as a delegate at city council, Feb. 13, to seek approval for reallocating existing municipal funding, given via a Government of Nunavut wellness fund and the federal Homelessness Partnering Strategy, to pay for consulting work.

At the same meeting, Dave Wilman from the Tukisigiarvik Society asked the municipality to allow that society to use HPS funding to purchase new space for the relocation and expansion of its wellness centre that serves Iqalungmiut in need.

This time last year, Iqaluit councillors were rallying to increase supports for people who are homeless in the city after the death of 29-year-old Jake Angurasak, who was a frequent client at the men’s shelter.

But in the fall, Coun. Joanasie Akumalik, who regularly advocates for homelessness support, said the work that is being done is going too slowly.

At a public city community hall meeting in November, one resident asked councillors why more shacks were not built as temporary housing, to meet an immediate need for accessible housing in Iqaluit. At the time, Coun. Kyle Sheppard said building shacks just wasn’t enough.

Attention was brought to the issue of homelessness in September, when Pangnirtung man Jacopie Akpalialuk burned to death because the boat that he lived in caught fire.

“I see this as working towards a solution,” Clark said of the Uquutaq Society’s efforts to bring true transitional housing to Iqaluit.

“We’re at the beginning stages. There are a lot of people working hard on this, including the City of Iqaluit. There’s a lot of support for taking this to the next level.”

She said the service, which doesn’t exist for men anywhere in the territory, could help homeless men to secure permanent housing.

“They [IHA] value and support knowing that people have gone through transitional housing and supports in order to be able to live independently and successfully in their units,” she said. “If we can get a new facility and transitional housing, that would be extremely valuable for these clients and good for our community.”

In the meantime, the city is making efforts to get the shelter plugged in with existing community organizations that can do the support work needed by a transitional housing program, without duplicating efforts, she said.

“We know that the needs are great in our community for our most vulnerable people,” she said. “It’s clear why they need the new facility.”

Redfern noted that many regular clients at the men’s shelter are not from Iqaluit.

“They’re not just people from Iqaluit, but they end up homeless in Iqaluit. They’ve moved here for jobs and lose their jobs, or they have been released from correctional facilities in the south and are unable to get back home. There are many reasons why these men become homeless.”