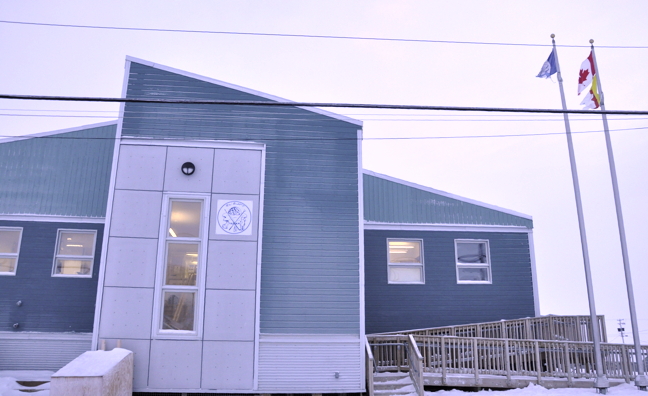 The Hamlet office in Igloolik: Igloolik residents will have to endure another painful coroner’s inquest, likely in fall 2016, into the death by police of Felix Taqqaugaq. (PHOTO BY THOMAS ROHNER)

Four years after RCMP officers shot and killed Felix Taqqaugaq in front of his common-law wife and four-year-old daughter, there will finally be a coroner’s inquest to find out how an altercation with a known mentally ill man could escalate into a fatality.

Nunavut’s Chief Coroner, Padma Suramala, had been waiting for the Ottawa Police Service to complete an external investigation into the events of that night, March 20, 2012, before calling an inquest.

The OPS finally finished their investigation and handed their report to the Nunavut RCMP, who promptly delivered it to the coroner last week.

In a brief news release Oct. 29, Suramala said she is now making preparations to hold an inquest, likely in fall 2016.

The inquest is mandatory under the Nunavut Coroner’s Act because Taqqaugaq, 29, died during an altercation with police.

Elizabeth Kappaniaq, Taqqaugaq’s older sister and his legal guardian after their mother died, said she hopes that the inquest will provide answers to some painful questions that have haunted her for years.

But talking about that night will be difficult for the family.

“I just want to get it over with. It changed us. I grieved that day, that week, that month. After two years, my anger, it was building up. If they’re going to have an inquest, it’s OK with me,” said Kappaniaq.

Mary Ijjangiaq, Taqqaugaq’s common-law partner at the time and mother of their three children, said she too has been anxious for answers.

“I always wanted to know why they did this when he had three children and they knew he was mentally ill. It’s so hard,” she said, crying on the phone. “My kids, they miss their father.”

Born in an outpost camp with many brothers and sisters, the Taqqaugaq family moved to Igloolik when Felix was around 10 or 12 because his mother was sick with cancer, Kappaniaq said.

After their mother died, Kappaniaq took on the role of Felix’s guardian. His mental illness become apparent when he was a young teen, said Kappaniaq, on the phone from Igloolik Oct. 29.

Kappaniaq said her brother was sent to Winnipeg for mental health treatment for schizophrenia three or four times, on one occasion staying for six weeks.

Since it was difficult for him to take his medication regularly, he was receiving multi-day doses through a needle at the Igloolik health centre, she said.

Sometimes, when Taqqaugaq was agitated, his eldest son would go to Kappaniaq’s house to tell her, and Kappaniaq would visit him. She would tell her brother to take a break and go for a walk to calm down while she watched his children.

“He would go out and walk around town and when he was calm, he’d go back home. He used to do that,” she said. He loved his children, she added. He never hurt them as far as she knew. He was trying to function as best he could.

Kappaniaq said she had been working with the Igloolik RCMP officers for a couple months to deal with Taqqaugaq’s periodic episodes.

Whenever they got a call to Taqqaugaq’s house, the RCMP officers were supposed to call her first so she could go there with them, or in advance, because her brother trusted her and listened to her.

“They would call me, ‘do you want to go check on Felix, how he’s doing?’” Kappaniaq said. “And I do go check, even though he would be behaving badly, saying his mind was telling him, do this, do that, and I’d talk to him, ask him if he needed help from the mental health nurse,” Kappaniaq said.

“They were supposed to call me every time they go over to his place,” Kappaniaq said. “That’s why I was so angry. I was home. It’s the one question I keep asking: why didn’t they call me right away? I thought they were good officers. We had been working together as a team.”

According to reports from Ijjangiaq and other family members, Taqqaugaq had been on community radio that night making threats because he mistakenly thought someone had stolen money from him.

Someone called the RCMP and they paid him a visit.

Ijjangiaq, reached Oct. 29 and still grieving the loss of her partner three years later, described, through tears, what happened next.

Ijjangiaq said Taqqaugaq was outside talking to the police and voices got loud so she went to see what was happening.

She said one officer tried to use a Taser gun on Taqqaugaq but missed him. Taqqaugaq then ran into the house and got a knife.

When he came back outside, they shot him, she said, three times, in front of her and their four-year-old daughter.

“When I went to see Felix, there was all blood. And I screamed a lot,” Ijjangiaq said.

She said she ran to a nearby family member’s home so she could leave their daughter there and then ran back to the house screaming, “Felix was shot, Felix was shot.”

Hearing the screams, Kappaniaq ran to the house but she was too late.

The officers had rolled Taqqaugaq onto his stomach, handcuffed his hands behind his back and were trying to get him to stand up while he was bleeding from the abdomen.

Kappaniaq said the officers took him away shortly after she arrived. He died soon after at the health centre.

She said the officers didn’t stay long in Igloolik after that. They were quickly transferred out, she said. She never saw them again.

We called the Nunavut RCMP for comment on this story. Cpl. David Lawson said he thought it was inappropriate to say anything about the case for fear of prejudicing the inquest process.

When asked if the two officers from Igloolik would be called to testify, he said that would be up to the coroner but, in a case like this, it’s customary for the officers to appear.

Igloolik went through another painful inquest process about a year ago to find answers in the death of Solomon Uyarasuk.

Uyarasuk died in Igloolik police cells. Although many thought it was a suicide, a coroner’s jury found in November 2014 that his death was “undetermined,” which means there was insufficient evidence to categorize the death as anything else.

A coroner’s inquest is a quasi-judicial proceeding held to answer questions about a death and to make recommendations, if possible, to avoid the circumstances that lead to that death.

A coroner’s jury cannot find fault with any party and any agencies named in those recommendations are not legally bound to abide by them.