Federal government kicks in up to $30 million, GN to put in up to $10 million 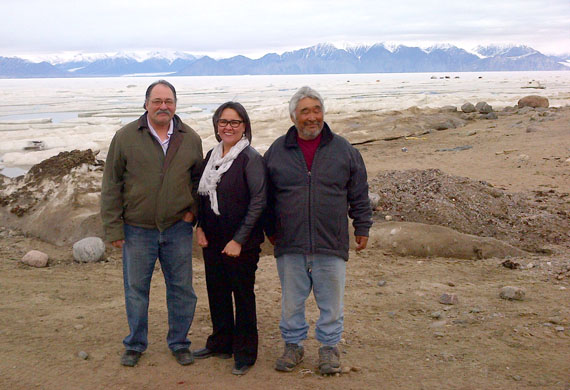 Tununiq MLA Joe Enook, Nunavut MP and CanNor Minister Leona Aglukkaq, and Charlie Inuarak, the mayor of Pond Inlet at the site of Pond Inlet’s future small craft harbour. Aglukkaq announced Ottawa will spend up to $30 million on the project through the Building Canada Fund while the Government of Nunavut will likely put in up to $10 million. (HANDOUT PHOTO)

Pond Inlet will become the second community in Nunavut to get a small craft harbour, after Pangnirtung.

Aglukkaq pledged up to $30 million in funding towards the project, money that flows from the New Building Canada Plan.

“This is a step in the right direction for Nunavut,” said Monica Ell, Nunavut’s minister of economic development and transportation, in a June 26 release.

“We currently only have one small craft harbour in a territory that has the longest coastline of any jurisdiction in Canada,” she said. “Once complete, this small craft harbour will provide protection to vessels in Pond Inlet and multiple economic benefits.”

The new harbour is expected to help increase the supply of food, fuel and other goods for local harvesters and the 1,500 residents of Pond Inlet.

The total estimated cost of the new harbour is $40 million.

The federal government says it will pay up to 75 per cent of the project’s cost, or $30 million, on the condition the project meets “federal eligibility requirements.”

The government of Nunavut is responsible for all remaining costs, said the June 26 release.

But the GN will first have to approve its $10 million contribution, likely at the fall session of the legislative assembly, confirmed Ell.

“Tentatively, we’re committed to supporting this project,” she told Nunatsiaq News. “This is very good news.”

Aglukkaq, who also serves as minister of the Canadian Northern Economic Development Agency, announced the funding along the shore of Pond Inlet early June 26, along with local MLA Joe Enook.

“Today, I am excited to announce another important investment that will directly support economic growth in the territory,” she said. “We are proud to invest in the Pond Inlet Marine Infrastructure Project which will not only bring important economic benefits to the area but directly support good well-paying jobs in Nunavut.”

No timeline has been announced for the construction of the new harbour.