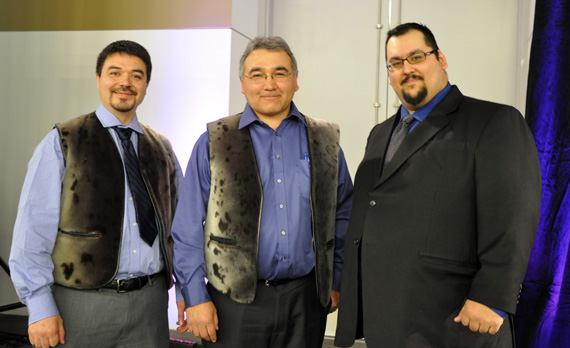 OTTAWA — Jobie Tukkiapik, the president of Makivik Corp., used a Jan. 31 speech to northern stakeholders to drive home one of the organization’s biggest demands of late: to get the federal government to provide much-needed housing to Nunavik’s 14 communities.

Tukkiapik, speaking to a luncheon crowd at the Northern Lights business and cultural showcase in Ottawa, described Nunavik Inuit as sharing language and values with Inuit in other regions of the country.

“We are all Inuit,” he said. “So is it right that the government of Canada treat us differently depending on where we live?

“In our region, the federal government regularly tells us to take up our demands with the provincial government,” he said. “Canada and Quebec must stop playing ping-pong with the people of Nunavik for the living conditions we endure today.”

For the past several years, Makivik has pursued the federal government for money to pay for a long-sought-after catch-up program to build enough housing in Nunavik to end the region’s housing crisis.

That, Makivik says, should flow from Ottawa’s obligations to Inuit under the James Bay and Northern Quebec Agreement.

And without Ottawa’s support, Tukkiapik told the conference that Nunavik is short 899 housing units, leaving 68 per cent of the population living in overcrowded housing.

Years of talks and negotiations — some of these by way of mediation — finally led to a November 2013 meeting with Aboriginal Affairs minister Bernard Valcourt, although the meeting did not produce any firm commitments.

“Just think for a minute – I’m sure many of you received family and friends over the holidays for a few days,” Tukkiapik told the conference. “Although you enjoyed their company, when those guests leave, you breathe a sigh of relief to have the space back that they occupied.

“But in Nunavik, there are sometimes two or three families sharing the same home,” he said. “[That’s why] Makivik considers it vital to keep this issue fresh in the minds of our elected officials.”

Resolving the region’s housing crisis is just one of the major files Makivik is pursuing in 2014.

Makivik also intends to become involved in energy development projects, while the organization is currently in the process of drafting a mining policy, expected to be made public in the fall of 2014.

The organization will also process the input it gathered through Nunavik’s Parnasimautik consultations, held through the region in 2013, to create Nunavik’s new vision moving forward.

“These voices will now become the blueprint for development in our region, as we continue to develop our nation to nation relationship with Quebec,” Tukkiapik said.

“All of this is part of our efforts toward economic and cultural autonomy – a pathway we’ve been following for 40 years now.”