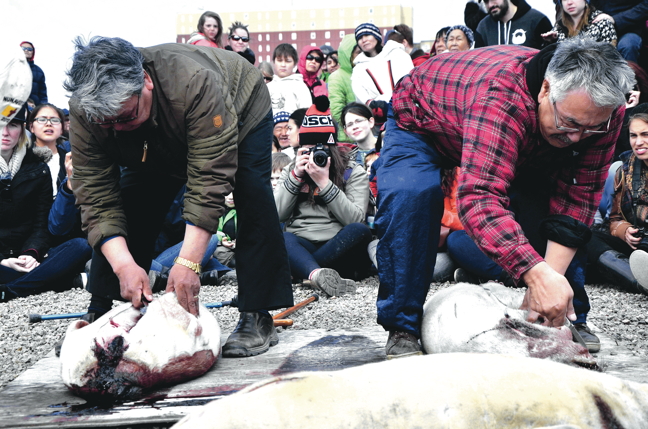 A multi-million-dollar fund announced in 2015 to help Aboriginal sealers certify and market their products to the European Union is starting to pay dividends. Ottawa and Nunavut just inked a deal worth $150,000 to go to Nunavut’s environment department. (PHOTO BY DAVID MURPHY)

The first payout from a five-year, $5.7 million promise to help Aboriginal people in Canada market their sealskins to the European Union is now officially in the hands of the Nunavut government.

A Jan. 28 news release from Fisheries and Oceans Canada, says an agreement worth $150,000 has been signed by Fisheries Minister Hunter Tootoo and Nunavut Premier Peter Taptuna.

The multimillion-dollar deal is referred to by the acronym CMAPS, which stands for Certification and Market Access Program for Seals, the details of which were announced in April 2015.

While the EU has banned the importation of sealskin products, it made an exception for products from Indigenous peoples.

In order to take advantage of the exemption, the federal government has agreed to help jurisdictions such as Nunavut, Nunavik and Nunatsiavut create a certification and marketing system so that Inuit products, for example, can be officially recognized and legally imported in EU-member countries.

The money would also be used to help Inuit across the Arctic start small businesses based on sealing and find new markets for seal products, said former Nunavut MP Leona Aglukkaq, when she announced the funding last year.

The Jan. 28 news release says that the Government of Nunavut will use the new money “to lead a number of projects in collaboration with the Nunavut Arts and Crafts Association and others,” to, among other things, increase the amount and market value of sealskin products and reinvigorate the industry.

According to the release, Nunavut’s environment department is currently the only recognized Canadian body designated to certify that seals harvested in Nunavut meet the requirement of the EU regulation.

“The EU ban on the import of seal products continues to affect Nunavut sealskin prices,” Taptuna said in the release.

“The establishment of CMAPS supports our continued efforts to promote sealing as a sustainable industry, and actively market this important product through the Inuit exemption.”

The EU ban on seal product importation passed in 2009 and it included an exemption for Aboriginal sealers, but groups in Canada said there was no practical way for anyone to take advantage of that.

Officials from Canada and the EU announced in October 2014 that they had struck a deal on how to certify Aboriginal seal products from Canada.

The recent news release says the $5.7 million is meant not only to support Indigenous communities but “to promote market access for all Canadian seal products.”

That seems to imply some of the money will be spent on non-Aboriginal seal products as well.