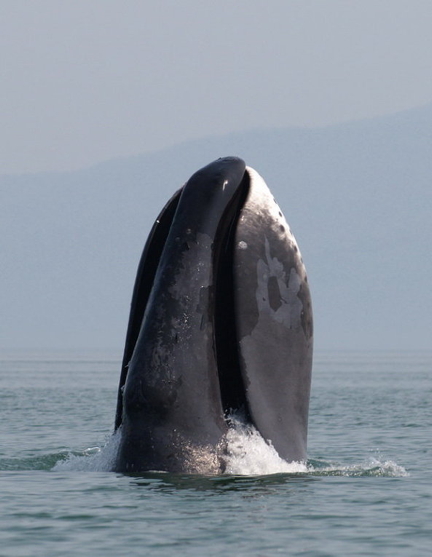 A bowhead whale breaches in the Sea of Okhotsk, off Russia’s eastern coast. Ottawa is considering designating this population’s cousins off Nunavut’s east coast as a species of “special concern.” (WIKIMEDIA COMMONS PHOTO, OLGA SHPAK)

The Department of Fisheries and Oceans wants to know what you think about listing some Arctic species under its Species at Risk Act, including the eastern Arctic bowhead and orca whales.

Ray Ratynski, the DFO’s central and Arctic region manager for the Species at Risk program, said Jan. 16 that listing those animals as “species of special concern” won’t affect current harvesting quotas but will trigger the need for a management plan.

“If the bowhead whale is listed, then there’s a need to do a SARA [Species at Risk Act] management plan and really, with special concern, the experts feel that if we don’t do something, the species could become endangered or threatened. But we try to do things early on,” said Ratynski.

“With special concern, there are no prohibitions. There’s no impact on harvesting. All that’s needed is a management plan.”

And that plan could simply mean adopting what’s already in place, or incorporating a current territorial plan, he added.

They are also considering adding the roundnose grenadier, another fish species suffering under commercial by-catch, to the list of endangered species in Canada.

The Species at Risk Act lists various animals and plants in Canada that require some form of protection.

The Committee on the Status of Endangered Wildlife in Canada (COSEWIC) is tasked with recommending which species get a designation of either extinct, extirpated, endangered, threatened or of special concern, depending on the vitality of those species.

So this is just the first step. If you want to have your say now, you can go here and click on the “get involved” link. You have until March 15, 2015 to do so.

“This is just the beginning,” Ratynski said. “There are a lot of steps involved, and a lot of it is kind of dry and boring.”

Ratynski said special concern status just flags the species as one to watch but doesn’t necessarily change the established quota system. It means the species would require a management plan to ensure harvesting is sustainable into the future.

The Bering-Chukchi-Beaufort bowhead population is currently listed as a species of special concern, Ratynski said, and there is still a hunting quota there.

Nunavut currently has an annual harvesting quota of four bowhead whales — two for Baffin and one for each of the Kivalliq and Kitikmeot regions.

The Kivalliq Wildlife Board has requested the quota be increased to five so they can hunt two whales each year.

Ratynski said the quota request, currently before the federal minister of environment for decision, is separate from the Species at Risk process and that the latter does not impact the quota deliberation.

Ratynski said a decision on the Kivalliq bowhead quota request is expected to come well before the Species at Risk decision.

The last survey of eastern Arctic bowheads had a huge estimated range, with an upper population limit of about 43,000 animals and a lower limit of about 5,000.

Ratynski said based on recent data, scientists now use a figure of about 6,000 eastern bowhead whales.