“This is devastating for the community” 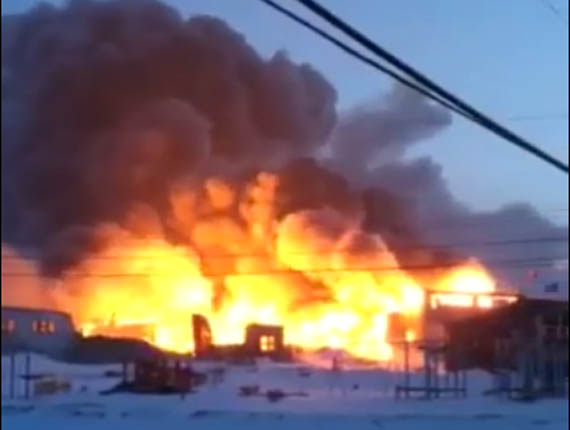 Kugaaruk’s Kugaardjuq school has been destroyed in a fire that started Feb. 28. Education officials are travelling to the Kitikmeot community Mar. 1 to identify alternate classroom space for the community’s 300 students. (IMAGE COURTESY OF B. TINAK)

A “suspicious” overnight fire in Kugaaruk has destroyed the western Nunavut community’s only school.

Nunavut RCMP called the Feb. 28 fire “suspicious,” as local police continue to investigate how it started, with help from the V Division’s Major Crime Unit and the territory’s Fire Marshall, the RCMP said March 1.

“This incident will have several negative impacts upon the community and our thoughts are with the community of Kugaaruk during this difficult time,” the RCMP said in a March 1 release.

As far as officials are aware, no one was seriously injured or killed in the fire.

Nunavut’s education department officials say the fire started late in the evening of Feb. 28 at Kugaardjuq School, home to about 45 staff and 300 students from kindergarten to Grade 12.

The fire continued to burn through the night and into the morning, while Environment Canada forecast an extreme weather warning, with the wind chill dipping to minus 56 C.

“This is devastating for the community. We really feel for the students, the teachers, the community,” he said. “We’ll do whatever we can to ensure that the community gets support.”

Quassa said a team from his department and the Department of Community and Government Services is travelling to the Kitikmeot community March 1 to scout out other infrastructure that could serve as a temporary school facility. Kugaaruk has a population of about 900 people.

“My staff and CGS will be looking at alternative classroom space,” he said. “All the GN departments are ready to help out where needed.”

Kugaardjuq School is the second in Nunavut to be destroyed by fire in recent years. In 2015, a fire burned through Cape Dorset’s Peter Pitseolak high school, leaving 170 students without classroom space.

Three youth were later charged with arson in connection with the Cape Dorset fire.

A new Cape Dorset high school won’t be completed until 2019, at an estimated cost of $34 million.

“We have to ensure we have a safe school. We have put in security systems in all our schools,” Quassa said in response to the Kugaaruk fire.

“We have to look at what other means we [have] to ensure we know exactly what’s happening at the school, even after school hours. This is something we certainly have to talk about it.”