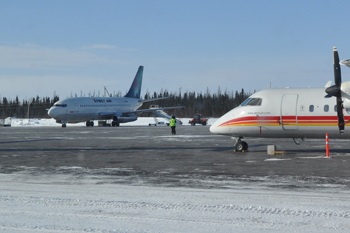 First Air has raised its base rate for shipping country foods to $1.50 per kilogram. (PHOTO BY SARAH ROGERS)

If you’re shipping country food to family and friends, shipping rates at the North’s two major airlines are now on par.

That’s since First Air bumped up its country food cargo rate this month to a base of $1.50 per kilogram. That’s the same rate already being charged by its major competitor, Canadian North.

As part of the latest increase, the airline has also changed how the country food rate is charged: instead of charging per kilogram from origin to destination, the new rate is charged by segment, for example, Pangnirtung to Iqaluit, and then Iqaluit to Ottawa.

“Like all our fares, available, schedules and network, the country food rate is continuously subject to internal review,” First Air said in a Feb. 25 statement. “Price adjustments reflect increased costs of carriage incurred by First Air.”

“We have always priced our country food rates as low as possible,” the statement said. “The country food cargo rate is the cheapest possible rate to ship cargo, well below our cost-recovery basis.”

“We recognize the value and importance of country food and are pleased to see an increase in country food shipments again in the last few months.”