First Air to phase out rotational cargo staff in Iqaluit 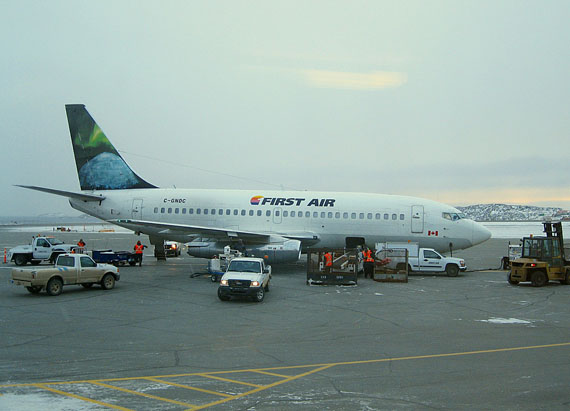 First Air will lay off nine staff at the Iqaluit airport Nov. 1, to make way for seven full-time employees who live in Iqaluit. Most of the affected staff are rotational workers who live in the south. (PHOTO BY PETER VARGA)

First Air is laying off nine employees at its cargo facility in Iqaluit, to be replaced by seven new positions for residents of the city.

The layoffs take effect Nov. 1, and are part of a move to phase out rotational staff who do not live in Iqaluit, Bert van der Stege, vice president of commercial affairs, told Nunatsiaq News, Sept. 30.

The northern airline announced the changes to staff on Sept. 26, after consulting with their union.

“What we would like to do is generate more permanent full-time roles in Iqaluit, for residents of Iqaluit,” van der Stege said, “rather than continuing to rely heavily on rotational staff.”

The changes affect staff who load and unload aircraft cargo at the Iqaluit airport.

The new positions will run on a six-week on, three-week off shift — meaning six solid weeks of work, or 42 days straight, followed by three weeks off.

Full-time cargo staff now work a four-week on, four-week off shift. Most of them typically fly into Iqaluit from Ottawa to do the work, van der Stege said.

“Their home is usually in the southern part of Canada,” he said. “We’re going to change that pattern.”

Van der Stege said the employees’ union, Unifor, is a “big supporter” of the change.

First Air is hopeful that the changes will encourage more Inuit beneficiaries of the Nunavut land claims agreement to apply. About 27 per cent of the airline’s employees are Inuit.

“We’re hoping that with this change, we can increase that to 30 per cent, at least,” van der Stege said.

The vice president said the staffing changes are unrelated to the proposed merger between his airline and Canadian North.

“We want to offer better service to our customers,” he said. Employees wanted the corporation to consider changes to working hours as well, he added.

“It’s not a secret that I look for further opportunities to improve our efficiency,” the VP told Nunatsiaq News from Winnipeg, Sept. 30, where he said he had just delivered the same message to employees.

“The aviation industry changes very fast, and we have to make changes according to market demand.”