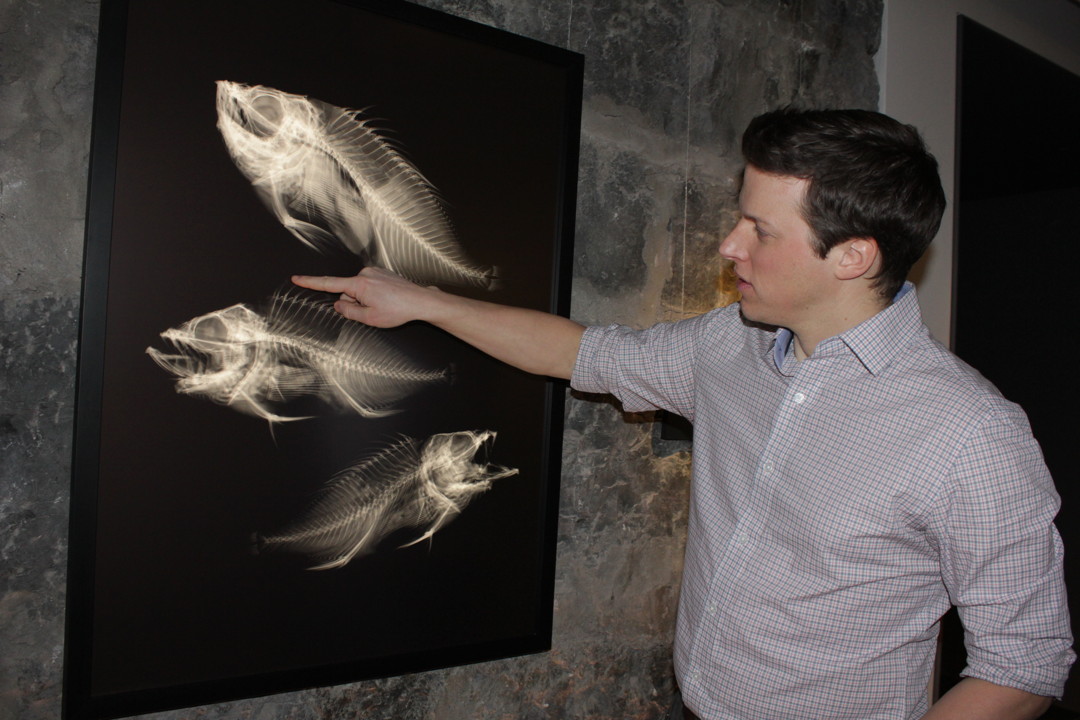 Roger Bull, project manager for Beneath the Surface: X-rays of Arctic Fish, an exhibit which just opened at the Canadian Museum of Nature, explains how he used sewing thread to pull up the spiky spine of the Acadian redfish. (PHOTO BY LISA GREGOIRE) 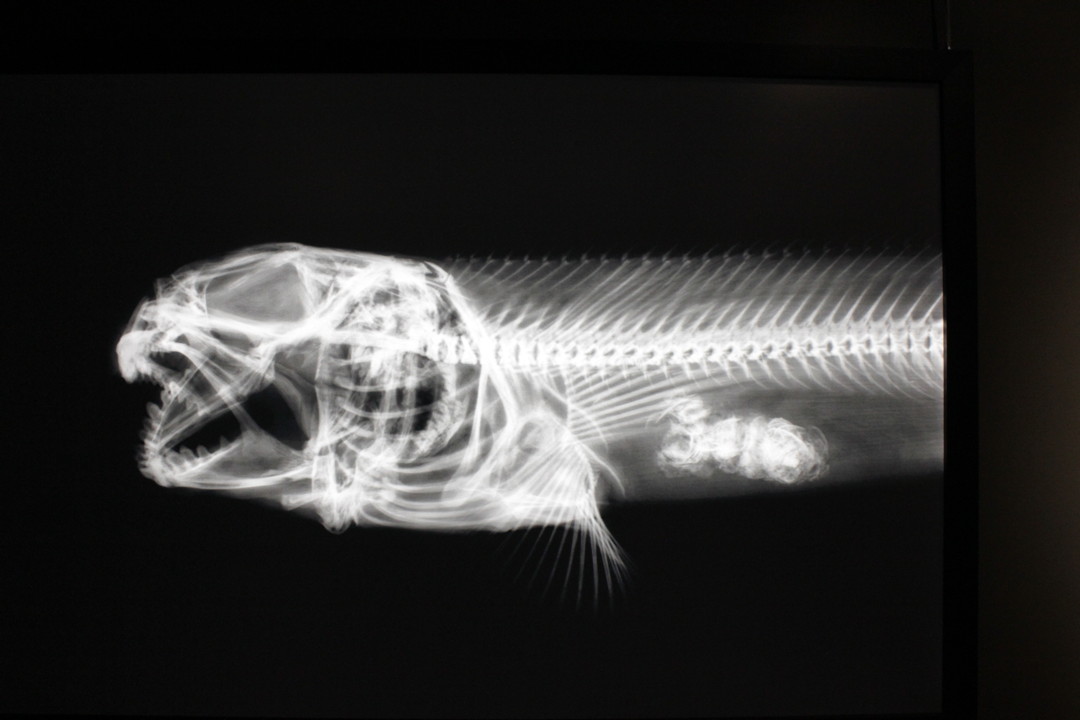 This ocean pout has peg-like teeth to crush and eat sea urchins, crabs, sand dollars and other shellfish. If you look inside it’s body, you can see a tangle of shellfish remains there. (PHOTO BY LISA GREGOIRE)

A new exhibit at the Canadian Museum of Nature proves beyond a doubt that even dead fish can be beautiful.

For the next year, visitors to the Ottawa museum who venture into the basement Stonewall Gallery will notice 16 stunning, large format, backlit X-rays showing the intricate bone structure of Arctic fishes such as Greenland halibut and sculpins.

“It’s a really nice link between what we do in the research department and the esthetics and beauty of the natural world,” said Roger Bull, the museum’s DNA lab coordinator and project manager for this exhibit.

But few people actually get to see them other than the scientists who work there and the researchers who get permission to examine them.

Those researchers often use X-rays to peer inside fish bodies to identify skeletal features that can help distinguish one species from another or establish a relationship between species, said Noel Alfonso, senior research assistant and fish expert at the museum.

In this way, they don’t have to destroy the specimen.

But part of the role of natural history museums, Alfonso said, is to communicate research results and information about the natural world to the public.

To that end, museum staff decided last year it would be interesting to enlarge the X-rays and show the public the hidden, intricate beauty contained inside that pickled flesh.

Easier said than done, however. X-raying specimens for science is one thing. Doing it for art is another.

Bull said he had to figure out how to fix the fish in place for maximum exposure, something he referred to wryly as “fish styling.”

The preserved fish are not always flat in those vats of ethanol – they can become bent or twisted — so the first thing Bull had to do was fashion ways of pinning the fish flat with materials that would not show up in the X-ray such as thread and painters’ tape.

In the case of the Acadian redfish, Bull noticed that its distinctive spiky spine was laying flat so he tied one end of a thread around the front spike and the other around the jaw and gently pulled it taut so that the spikes would be visible in the X-ray.

“We didn’t have much time. This was the end of November so we were flying by the seat of our pants,” Bull said. “It took a lot longer than we anticipated.”

Once he got comfortable with the subject matter, he started playing with design — putting prey and predator together in one X-ray (Greenland Halibut chasing a couple of Glacier Lanternfish) or layering digital files together to make three fish look like a whole school.

Some more notable examples include fish with things inside them such as the Boa Dragon fish, which has a fully formed fish inside it and the knot of shellfish remains inside the Ocean pout.

The fish look so vibrant, you’re apt to think they were alive when they were X-rayed.

The other major challenge in putting the exhibit together was finding a commercial provider to design light boxes so the prints, some as large as 30” x 40”, could be backlit to enable viewers to see the thinnest bones. Then they had to find discreet ways to string electrical wires to each print.

The finished product is extraordinary and unique and was delivered, Bull said, under its $20,000 budget. 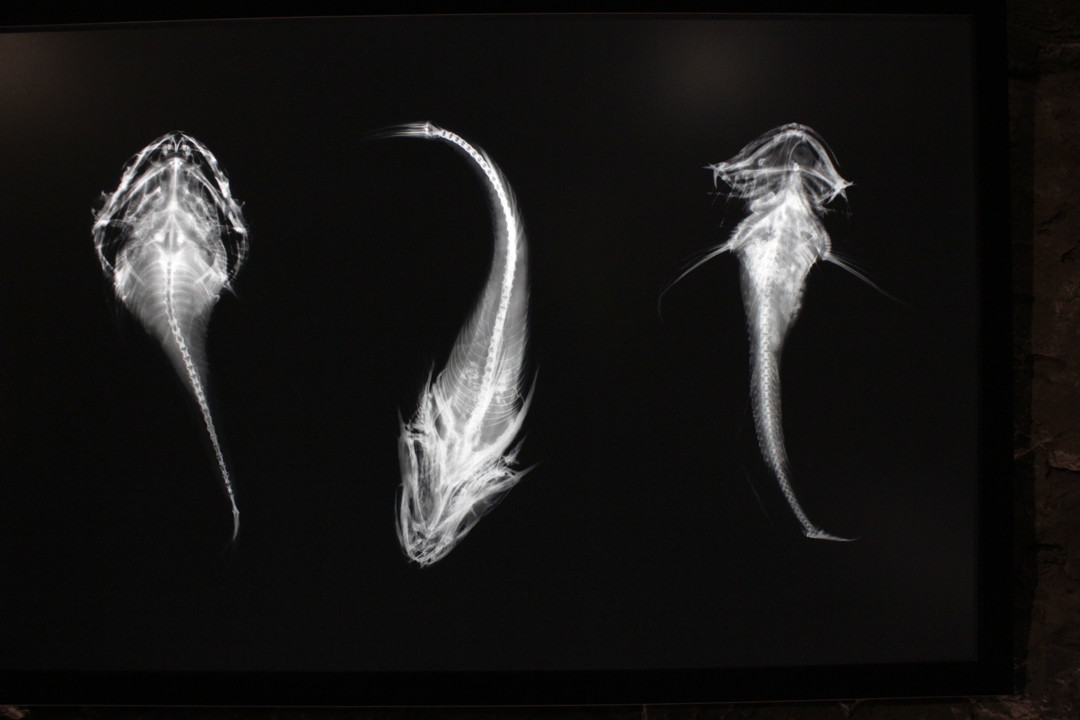 These sculpins are benthic fish which means they scour the ocean floor for food. Their heads and jaws are wide and suited for this purpose but their bodies are not very muscular. (PHOTO BY LISA GREGOIRE)