Wildlife boards from Baffin and Kivalliq each want two whales annually, up from one 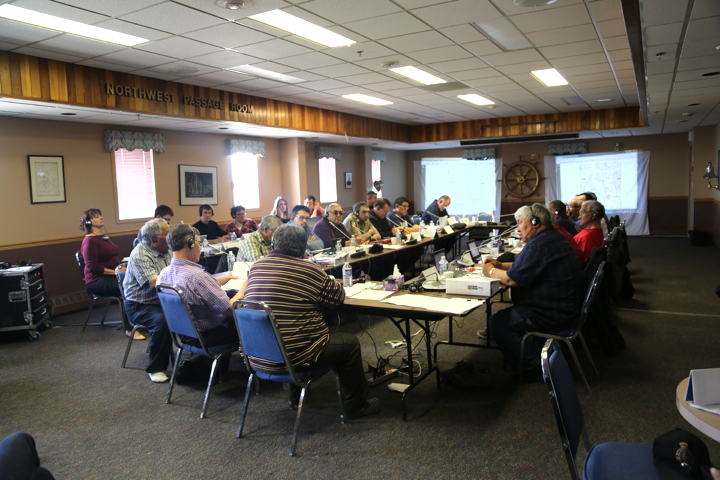 Members of the Nunavut Wildlife Management Board hold public hearings June 18 into a request by the Kitikmeot Regional Wildlife Board to increase the total allowable harvest of polar bears in the M’Clintock Channel to 18 from the current three. The NWMB has not yet made a recommendation on that request. (PHOTO BY RED SUN PRODUCTIONS)

It’s now up to the federal fisheries and oceans minister to decide if Baffin whalers will be able to harvest one extra bowhead annually.

But soon after Gail Shea makes that decision, she’ll have to consider a similar request from the Kivalliq region.

The Qikiqtaaluk Wildlife Board made a formal request through the Nunavut Wildlife Management Board Feb. 5 asking for an increase to the total allowable harvest of bowheads to four, from the current three.

Right now, each region gets to harvest one bowhead whale annually, but Baffin hunters are making the case that they should get the opportunity to harvest two whales.

In its submission, the QWB said it has built up enough capacity and expertise to handle a second whale harvest annually and that “current research on bowhead whale suggests the Baffin population is stable and growing.”

“In increasing the number of hunts in this region, we are working to develop, and diversify, the experience,” said James Qillaq, who signed the submission as chair of the QWB.

“We believe we create the opportunity to develop more effective strategies to deal with a range of issues beyond ensuring a safe and successful hunt; issues like processing, distribution and utilization of the whale.”

The Committee on the Status of Endangered Wildlife in Canada upgraded the status of the bowhead whale from “endangered” to “special concern” in 2009.

The minister has 60 days, or until mid-August, to accept or reject the NWMB’s recommendation.

On April 28, just days after the NWMB closed public comments and submissions on the bowhead harvest request, the Kivalliq Wildlife Board made the same request – to increase their regional harvest from one to two whales.

In their submission, the KWB says it has given their 2014 quota to Chesterfield Inlet and wants to allow Coral Harbour a bowhead too.

“It would greatly benefit the Kivalliq region, and the muktuk from the bowhead(s) would be distributed amongst the communities to ensure all beneficiaries carry on the traditional diet of consuming bowhead muktuk, which is now considered a rare delicacy,” writes Ross Tatty, who signed the submission as chair of the Kivalliq Wildlife Board.

Interested parties have until Aug. 15 to make written bilingual submissions. That’s right around the deadline for Shea to decide on the first bowhead harvest request.

The NWMB also made a recommendation to the DFO minister on a new Integrated Fishery Management Plan for Cambridge Bay, put forward by the Ekaluktutiak Hunters and Trappers Organization.

That plan covers a wide range of issues including stock conservation, fisheries monitoring, licence conditions, compliance and harvest reporting — all in an effort to ensure the resource is sustainable into the future.

That fishery occurs on five rivers — Paliryuak (Surrey), Halokvik (Thirty-mile), Palik (Lauchlan), Ekalluktok (Ekalluk), and Jayko (Jayco) — with a total quota of 53,500 kilograms and has an estimated market value of $1.15 million.

It is the largest commercial Arctic char fishery in Nunavut.

The DFO minister has until mid-August to accept or reject the NWMB’s decision on this matter.

At their June meeting in Cambridge Bay, the NWMB also hosted public hearings on increasing the total allowable harvest of polar bears in the M’Clintock Channel to 18 bears from the current three.

The NWMB has not yet made a decision on that matter. When they do, they will submit their recommendation to the federal environment minister, Nunavut MP Leona Aglukkaq, who will make the final decision.