Flying in the face of tradition: Air Inuit gets its first Inuk woman captain

“It’s nice to see people can look up to you, especially other girls” 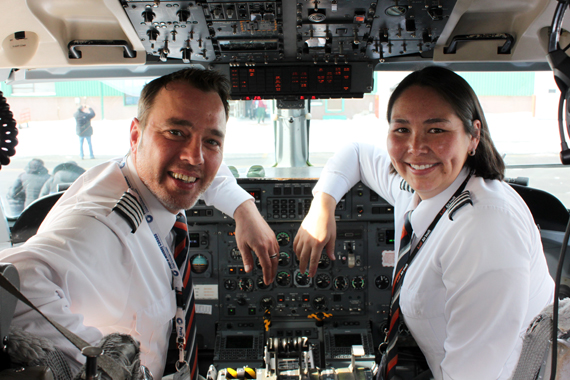 BROMONT, QUE. — Melissa Haney gets a lot of funny looks and comments behind her back.

But they’re not the negative kind. From the cockpit of a Twin Otter or Dash 8, the Air Inuit pilot has grown used to the attention she gets when she shows up to fly passengers up and down Nunavik’s Ungava and Hudson coasts.

Haney’s favourite comments come from young Inuit passengers, when they ask their parents: “Is that a girl pilot?”

It’s those simple observations that remind Haney, 34, that she’s special in what she does. Haney is one of two Inuit women pilots — there are 13 Inuit men pilots — at the Makivik Corp.-owned airline.

And she’s just months away from making caption on the Dash 8 — the first Inuk woman at the airline to do so.

“I think it’ll be a good milestone,” Haney said over a cup of coffee March 17 in Quebec’s Eastern Townships, soon after her evening flight to Nunavik was cancelled due to bad weather.

There are barriers for women breaking into an industry that has long been dominated by men, Haney acknowledges.

“But I think a lot of them have been broken. A lot of people, when they see a female pilot, they smile and say something encouraging,” she said. “It’s nice to see people can look up to you, especially other girls.”

Like Inuit in coastal communities across the Arctic, Haney’s first taste of travel was by air.

She spent her early childhood in the hometown of her late father — a Kasudluak — in the Hudson coast community of Inukjuak.

Her mother’s work as a teacher took her to two other communities, Umiujaq and Kuujjuaq.

At the age of eight, Haney moved south with her mother to the Eastern Townships, a region she’s called home pretty much ever since.

Like many of her Nunavimmiut family and friends, Haney studied at John Abbott College in Montreal, and completed a year of university.

“But I didn’t really know what I wanted to do,” she said. “And then someone mentioned that Air Inuit was hiring flight attendants.”

At 19, it sounded like interesting and well-paid work, but it was also a chance to get back to Nunavik and visit the communities Haney grew up in.

Air Inuit’s fleet in the early 2000s wasn’t what it is today; passenger service still operated on the 748 and there was no jet service to Puvirnituq.

But by 2003, the airline began replacing those 748s with the Dash 8. It was the same year Haney decided to spread her wings and she began flight training in Cornwall, Ont.

The following year, she was enrolled in ground school with Air Inuit on the airline’s Twin Otters.

“When I started on the Twin, it was such a fun experience,” Haney said. “Seeing Nunavik from that angle; I was able to see all the villages, the wildlife, the icebergs.”

Haney began bumping into childhood friends and distant relatives she hadn’t seen for many years — landing in Inukjuak was and continues to be a small-scale family reunion.

Haney is juggling family life of her own; she lives with her husband Pierre-Olivier, another Air Inuit Dash 8 captain, and their two children, Julien, five, and Olivia, two.

The two manage parenting over their 28-day work cycle at the airline, each of them spending an average of 10 days in the air.

Flying in an Arctic region like Nunavik comes with its share of turbulence, but when asked about her most memorable flight, Haney smiles.

She was flying a charter of passengers from Salluit to and from an inland camp on a fall day when fog started to roll in.

“We couldn’t land in Salluit, and the weather was going down all along the coast,” Haney recalled.

Haney finally put down on an old landing strip outside the Hudson Strait community, and by luck, a few of the passengers had a cabin nearby.

Passengers also had an all-terrain vehicle on board, so the group was able to travel to the cabin and start a fire, while some went hunting and brought back a caribou.

Once the weather cleared at the end of the day, Haney was able to fly the group back to Salluit.

“You think you can plan your day, but it’s rare that it goes as planned,” Haney said. “But it’s my favourite flight to this day.”