“Why has Aboriginal Affairs and Northern Development Canada failed to report on the cost of the Revised Northern Food Basket?” 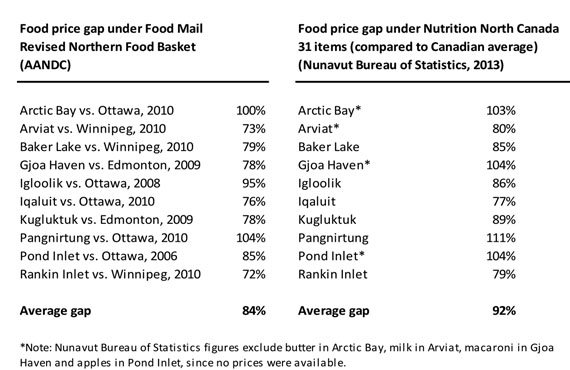 As former managers of the Food Mail Program, we were interested to read your story on the Nunavut Bureau of Statistics recent food price surveys in Nunavut communities (“Yes it’s expensive to eat in Nunavut: food price survey,”August 22, 2013.)

However, your reporter’s comparison of the total cost of the Nunavut bureau’s selection of 28 items in 10 Nunavut communities with the cost of a healthy food basket that would feed a family of four in Ottawa for a week is invalid and therefore highly misleading.

The bureau’s costs are not the cost “for a selected weekly basket”, as your article claims. In fact the bureau cautions that this “is not an official basket, but rather a tool for overall price comparison between communities.”

The total cost of these 28 items, ranging from approximately $216 in Iqaluit to $256 in Gjoa Haven, says nothing whatsoever about the cost of feeding a family of four – or any other size, for that matter – in these communities.

Even the conversion of the monthly cost of feeding a family of four in Ottawa in 2011 ($759) into a weekly cost (said to be $189) was incorrect. The conversion factor should be 4.33 (the average number of weeks in a month), not 4.

What can be compared – and what your article failed to mention – is the cost of the items the bureau used for its price surveys with those available in the food component of Canada’s Consumer Price Index (CPI.)

For most non-perishable items (no longer eligible for subsidy under Nutrition North Canada,) the gap was well over 100 per cent.

The price gap between the total cost of the 31 items priced by the bureau in Nunavut and the average cost in Canada, taking into account the missing prices for items in a few Nunavut communities was 92 per cent.

In other words, the Nunavut average was 92 per cent higher than the average cost of the same items in Canada, a far more significant difference than that suggested by the figures given in your article. We would caution readers, however, that the figure of 92 per cent is not the price gap for a healthy food basket, but for a selection of items for which data happened to be available.

As shown in the accompanying table, under the Food Mail Program, the average gap between the cost of a healthy food basket in the same Nunavut communities and relevant southern cities was 84 per cent, somewhat lower than the 92 per cent gap evident in the price data collected by the Nunavut Bureau of Statistics.

This raises the question: Why has Aboriginal Affairs and Northern Development Canada failed to report on the cost of the Revised Northern Food Basket (using figures provided by retailers) since September 2012 — the month right before non-perishable food became ineligible for the Nutrition North Canada subsidy — despite the public commitment to quarterly reporting?

Even the quarterly reports on the volumes of subsidized shipments and associated expenditure on this program have not been published since the period from April to June 2012. What are they trying to hide?

Your article also focused on the differences in the total cost of the 28 items among the 10 communities in the bureau’s pilot study. Both the Food Mail Program and Nutrition North Canada were intended to reduce, if not completely eliminate, these community differences.

Food Mail did so by charging the same rate for shipping nutritious perishable food to all communities. Nutrition North Canada does so by having a different subsidy rate for each community.

We can only hope that both AANDC’s 2013 evaluation of Nutrition North Canada and the Auditor General’s upcoming audit of the program will shed light on which program has been more effective in achieving reduced and relatively uniform costs of nutritious food in isolated northern communities.