From blizzards to Lake Iqaluit: wonky warmth in eastern Nunavut

Record high temperatures in Pangnirtung and Iqaluit this week 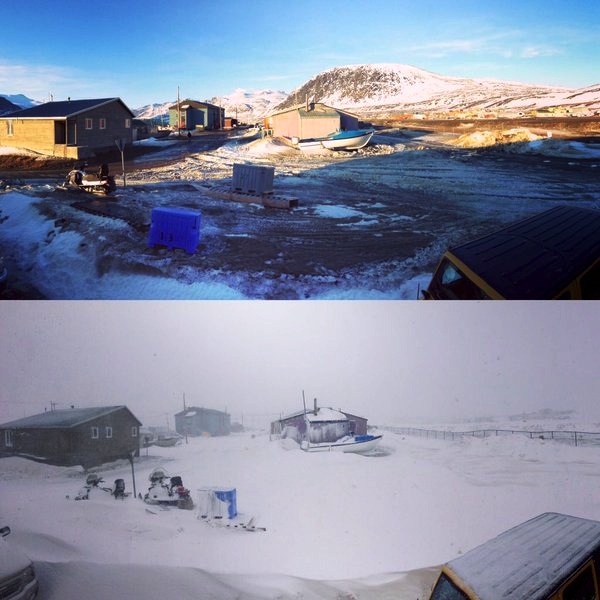 From one extreme to the other: Here, in this photo collage by Daniel Kuluguqtuq, you can see the community of Pangnirtung April 26 on the top, under sunny, record-breaking warm skies, while you can see the same view April 21 on the bottom. 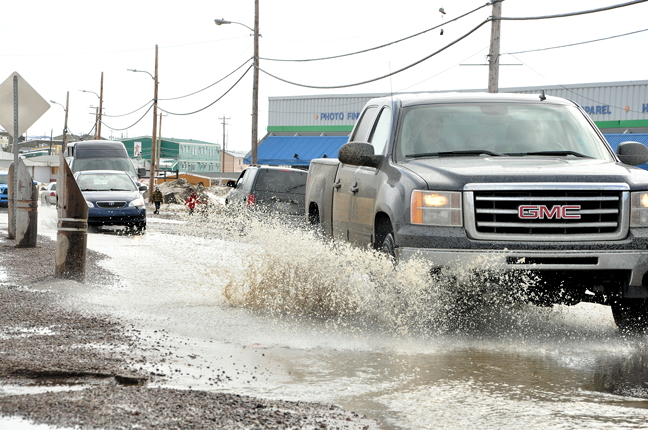 If you think driving is bad… try walking, and staying dry, in Iqaluit this week. (PHOTO BY THOMAS ROHNER) 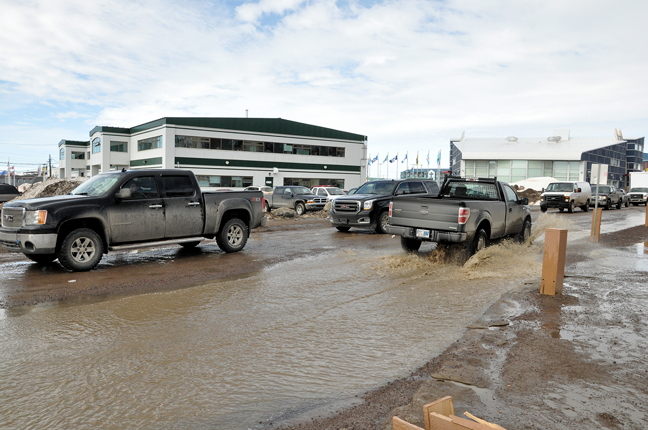 Get out your fishing rods Iqaluit: the place of many fish just got a few new spring watering holes. The excessive water prompted the City of Iqaluit to issue an advisory April 28 admitting that “the volume of run-off is exceeding the City’s capacity to manage.” The “extreme run-off” followed a winter with a lot of snow, with the City saying it would try to address areas with the worst drainage. Meanwhile, some residents were asking on social media if there were any sandbags in town. (PHOTO BY THOMAS ROHNER)

With an early and dramatic spring thaw underway on Baffin Island, drivers and pedestrians alike are disappearing into the enormous water-filled potholes that now litter Iqaluit’s streets.

Well, not quite. But almost.

In Nunavut’s capital this week, temperatures soared above freezing and historic seasonal averages, according to Environment Canada.

Iqaluit residents, many basking in the sun and some daring to don shorts, saw a new record set on April 27 when the mercury rose to 6.3 C.

According to Environment Canada, that breaks the April 27 record of 5 C set in 1953.

But, as wet and sloppy as the streets of Iqaluit have been, the nearby hamlet of Pangnirtung has been even more soggy.

In that community, Environment Canada data shows that the 0.2 C record set for April 27 in 1996 was blown away this year when temperatures rose to 7.4 C.

Residents in Pangnirtung saw even warmer temperatures April 26, when the thermometer read 10 C, and April 28 was set to be another record-breaking day, according to Environment Canada data.

Some community members took to social media to report that the local hockey arena was closed because the ice had melted.

On April 28 in Pangnirtung, the high of 0.7 C also beat the previous high of 0.8 C from 2008.. That’s still about six degrees more than the normal temperature of minus 6 C for the day time high.

Even more dramatic records are being set across Baffin Bay in Greenland.

In Greenland the monthly temperature is 9.5 C above normal: The Greenland ice sheet began its earliest recorded melt April 11, shattering the previous record by more than a month, according to Polar Portal, a website of Danish research institutions that monitors the ice sheet and sea ice.

Temperatures on Baffin Island are expected to return to more seasonal norms in the near future, dropping below the freezing mark again starting April 30.