Another fine craft to ply the Northwest Passage this summer 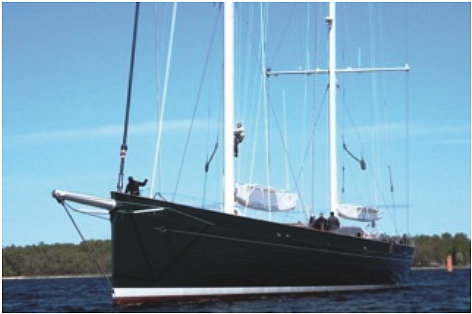 A photo of the Hetairos sailing yacht contained in the project application submitted to the Nunavut Impact Review Board. 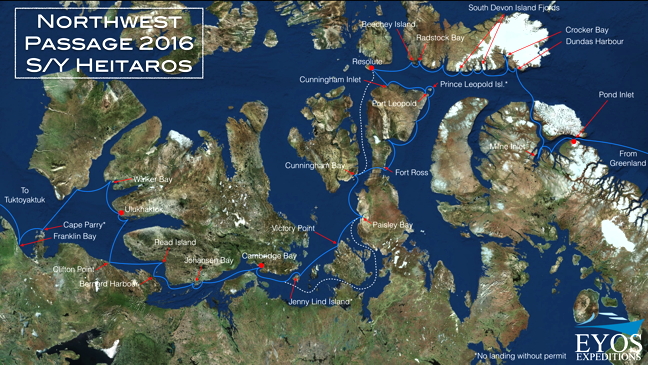 A map of the hoped-for voyage of the sailing yacht Hetairos through the Northwest Passage.

When the Government of Nunavut got serious this past June about regulating marine tourism within the territory, officials were probably thinking about water craft such as the Hetairos.

A world class sailing yacht, nearly 67 metres long, the Hetairos — which means comrade or companion in Greek mythology — plans to ply the Northwest Passage this month with eight to 12 guests on board and a dozen crew members.

According to documents filed with the Nunavut Impact Review Board, the yacht, which has won international sailing competitions, will sail from Greenland to Alaska some time in August and September, depending on weather and ice conditions.

It plans to make stops in Pond Inlet, Resolute and Cambridge Bay along with numerous historic sites such as Beechey Island, before heading toward Tuktoyaktuk and Alaska.

“Every effort will be taken to ensure that the visits are low impact and that no trace will remain afterwards,” says the project description submitted to the NIRB.

“Arrangements are being made in advance of the purchase of fuel and supplies at certain communities.”

The yacht’s captain will be aided by ice pilot Clive Shute and the guests will be led ashore and guided by expedition leader Cecilia Vanman — both of whom have experience in the Arctic, according to the project description submitted to the NIRB.

The NIRB has so far received comments from Transport Canada, Indigenous and Northern Affairs Canada and the GN regarding the Hetairos‘ traverse through Nunavut waters. None had serious concerns with the voyage.

The GN’s response was the most extensive.

The GN’s department of Culture and Heritage stressed that any visits to historic sites must comply with the conditions and requirements of archaeological permits.

Its environment department said that polar bears, during the ice-free season, are forced on land are in a “fasting state” and that it is essential that they be disturbed as “little as possible.”

Stress from human disturbance during this part of the season taps their energy and can impact their health and survivorship, GN officials wrote, so they asked that polar bear interactions be avoided if at all possible and that shotgun blasts could serve as a good deterrent.

The GN also encouraged the vessel’s owners to apply for a wildlife observation license from the GN prior to any sightseeing activities.

According to various Internet sites including Forbes.com, the yacht is owned by German entrepreneur and billionaire Otto Happel.

Built in 2011 by Baltic Yachts of Finland, the light weight carbon hull masks a luxurious wood-floor interior with bedrooms and dining areas, according to a story in Boat magazine.