“I am really enjoying the seal meat” 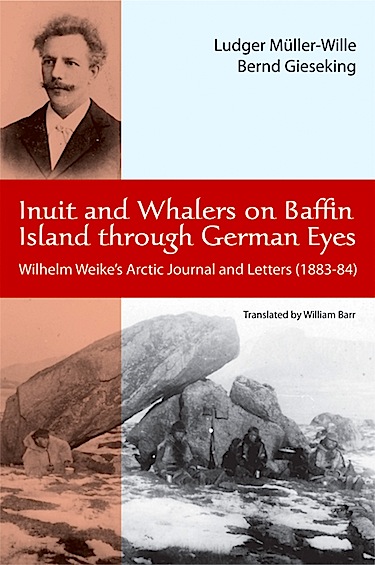 Wilhelm Weike’s journal — now available for all to read — shows the challenges of life in the Eastern Arctic 130 years ago.

Sea ice by early September, frostbite in December, and a long, bitter winter marked by temperatures plummeting to -50 C and many deaths.

Anyone who believes life was easy 130 years ago in the Eastern Arctic should read the journal of Wilhelm Weike.

Weike, a mustached 23-year old handyman from Minden, Germany, accidentally found himself spending the year of 1883-84 among Inuit and wintering with whalers in the Cumberland Sound

Written with a pen using frozen ink — first warmed over a flame or with body heat, Weike’s daily journal was recently published in a book, called Inuit and Whalers on Baffin Island through German Eyes, Wilhelm Weike’s Arctic Journal and Letters (1883-84) by Ludger Müller-Wille & Bernd Gieseking.

Weike’s descriptions of the Arctic weather and terrain, his precise observations of life and impressions of his encounters with Inuit, whalers and wildlife bring you back to a time when winter started in late August and only a few hundred Inuit lived in and around Cumberland Sound.

Of these, roughly 80 were so-called ”station Inuit” who lived on Kekerten Island along with a couple of dozen whalers.

Weike ended up on Baffin Island as a servant. His boss, the young German anthropologist Franz Boas, travelled there to conduct research, and, even after he suffered severe frostbite to his feet, Weike continued to look after Boas, preparing his master’s meals, maintaining his equipment and washing his clothes.

But, as a result of his frostbite, which left skin and nails hanging from his toes, Weike spent some of the winter in a tupik, then in an iglu with Oqaitung, called Ocheito, and his wife, who brought him back to health with a ready supply of hot tea and seal meat.

“I am really enjoying the seal meat… Ocheito’s wife thinks I must always eat. First, there is raw seal meat; next hour cooked seal meat and finally frozen: this goes on all day long.”

After arriving in the Eastern Arctic only able to speak German, Weike learned some Inuktitut, along with new skills like running a sled dog team.

Weike adapted to local condition: he played the accordion at gatherings, and had his hair cut in “Eskimo fashion.”

“All of this meant he felt uninhibitedly at home among the Inuit,” say authors Müller-Wille and Gieseking in their comments on the journal.

“Weike would set foot in the tupiks and iglus of the Inuit, eat with them, and take part in their lives, and would live with and visit whalers at their stations… he learned and was receptive to new things, was a passionate hunter, became an expert Arctic cook, assisted Boas in endless chores, kept a regular journal, grasped the life, spirituality, culture and thoughts of the Inuit and forged friendships.”

During the course of the year, Weike forged a close relation with a woman called “Tookavay.”

Weike also observed shamanism, what he called “ankuting” (after angkukkaq) or conjuring — in which his new friends in one instance used a tin plate, because no qilaut or drum was available.

During the winter he spent in that region, one man, four women and six children died — including Ocheito’s wife.

While contact with the whalers and visitors meant access to imported provisions, equipment, alcohol, bread, coffee and molasses, it also brought illnesses like syphilis, diptheria, colds and pneumonia.

But when it came to a choice between the simple medicinal treatment of the Europeans (which usually involved alcohol either ingested or applied), Inuit opted for help from shamans.

Weike’s boss Boas relied on Inuit to assist him with his scientific work in drawing up place-name maps, but the results took 100 years to communicate.

Meanwhile, the memories of Weike and Boas persisted in oral tradition, Müller-Wille and Gieseking note.

Today, reading Weike’s written account of his year in the Cumberland Sound provides an insight in a period when contact had already started to change Inuit culture.

While Weike died in 1917, Boas went on to renown as a “father of American anthropology.” Boas promoted the respectful approach of “cultural relativism” — in which says the elements of a culture are meaningful in that culture’s terms, even if they may be meaningless in another culture.

“With this book Wilhelm Weike takes his rightful place alongside Franz Boas as an astute observer of Inuit life. His narrative places a common man’s perspective on the events of a single year that shaped Boas’s career, and helps us in contextualizing the work of the scientist,” says Kenn Harper, who writes the Taissumani column for Nunatsiaq News.