Get on your feet: Nunavut music showcase starts now

By BETH BROWN AND LISA GREGOIRE 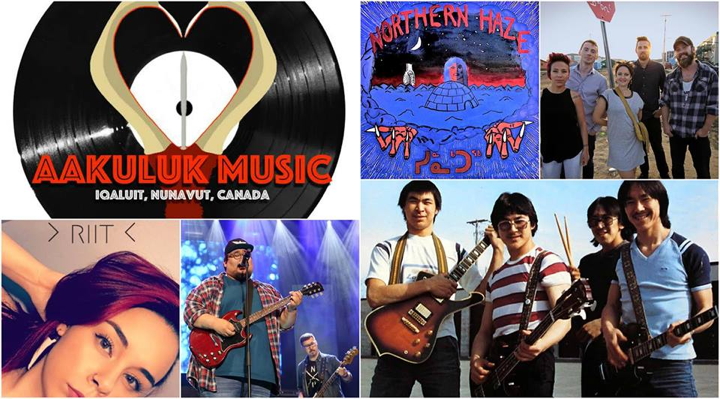 Some bands that will be appearing this weekend as part of the first Nunavut Music Week: bottom from left, Riit, The Trade-Offs, Northern Haze and, top right, The Jerry Cans. (PHOTOS COURTESY AAKULUK MUSIC)

If you play music, or love to listen to music, then Iqaluit is the place to be in Nunavut this weekend.

The territory’s first record label, Aakuluk Music, is organizing the first Nunavut Music Week with evening showcases at the Royal Canadian Legion and daytime music panels and “mentorship sessions” at the Francophone Centre.

The daytime sessions, which start up Sept. 29 and will include English-Inuktitut translation, will offer young musicians, songwriters and performers such as Billy Jay Amaaq, Colleen Nakashuk and Lazarus Qattalik a chance to learn from veterans such as The Jerry Cans, Northern Haze and The Trade-Offs.

“It’s the culmination of a lot of years of work manifesting in this conference that we are calling Nunavut Music Week,” Andrew Morrison, a member of the Jerry Cans and co-founder of Aakuluk Music, told Nunatsiaq News just prior to a Friday morning panel which brough together artists, publicists and media from around North America.

“A challenge for these artists is to make industry connections because we can’t go to Toronto for less than 1,500 dollars,” Morrison said. “We also thought it would be important to bring the industry representatives up to Nunavut so that they understand the context that we are dealing with up here.”

Because northern artists don’t have ready access to gigs and music industry types, they may not be familiar with recording contracts—what should be in there, and what should not. Panel discussions will touch on that.

The conference is also a chance to bolster the confidence of emerging artists, and to let them know they don’t have to sing in English to “make it.”

“The goal is to develop the industry in a way that artists can succeed while singing in Inuktitut and not be forced to sing in English. That’s a lot of the pressure that The Jerry Cans felt and I think that the other bands are feeling. We are prioritizing Inuktitut music,” Morrison said.

“It’s a way of making a career in music but also being able to live in Nunavut and to continue to be part of your community… We’re going for the moon.”

And if you haven’t already, put your dancing shoes on Iqalungmiut: evening performances at Legion Branch 168 promise to get you on your feet. And the best part is, they are free—for Legion members and those who get signed in.

Saturday night kicks off around 10 p.m. with Misterlee, Lazarus and Billy Jay and The Jerry Cans—the talk of southern media and darlings of the southern club scene, thanks to a successful summer tour.

The Jerry Cans also just received a nomination for Ensemble of the Year from the Canadian Folk Music Awards.

“Both shows will have some sweet special surprise guests and you will definitely not want to miss this,” Aakuluk posted on their Facebook page.

He might be referring to award-winning Inuk performer Tanya Tagaq who is in Iqaluit for a Saturday night concert of her own, courtesy of Alianait. This marks the first time that Tagaq has performed in Nunavut’s capital in 10 years—and the sold-out show, at Inuksuk High School, is sure to be a memorable one.

Sponsors who made Nunavut Music Week possible include Canadian North, the Canada Council for the Arts, the Nunavut Government and “the generous citizens of Iqaluit, who are opening their doors to delegates in the midst of a hotel crisis,” Aakuluk said its news release.

The recent closure and sale of the Hotel Arctic in Iqaluit means Nunavut’s capital now has 76 fewer rooms for visitors.