Get the world’s dirtiest shipping fuel out of the Arctic

“It’s time the rules for shipping reflect the risks it poses to Inuit livelihoods and hunting.” 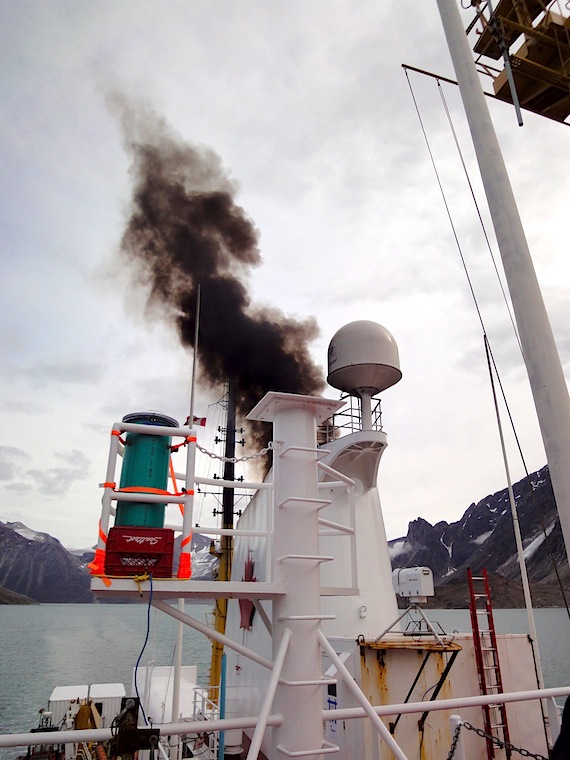 Black exhaust from heavy fuel oil, or HFO, floats up into the air from an icebreaker off the coast of Baffin Island. The exhaust, filled with black particles, contributes to warming on the land while its pollutants also affect human health. (FILE PHOTO)

For hundreds of years, national and international policies have shaped the Arctic from whaling to the fur trade, from territorial laws to statehood.

Now, with land claim and benefit agreements in place in Nunavut, policy not only must be Inuit-led, it must also address the dramatic changes our home is undergoing in this new warmer Arctic climate, where sea ice is declining—even in the middle of winter.

This loss of Arctic sea ice opens up potential for an increase in shipping, and with that, the risk of disasters.

To counter such risks, last December the United States and Canada announced a “phase down” of the dirtiest of marine fuels: heavy fuel oil or HFO, from use in vessels operating in the Arctic.

The two governments had already formally notified the International Maritime Organization in September 2016 that a “heavy fuel oil spill in the Arctic could cause long-term damage to the environment.”

The U.S. and Canada are now committed to propose, in time for the next meeting of the IMO’s Marine Environment Protection Committee in July 2017, that work begin towards phasing out HFO.

Heavy fuel oil is a dirty and polluting fossil fuel used to power ships all over the world. HFO poses risks for both the marine environment and climate wherever it’s used, but if it spilled here, in our Arctic waters, HFO breaks down even more slowly and will have long term, devastating effects on both our livelihoods and the ecosystems on which we depend.

HFO is already banned in the Antarctic because of its potential spill impact on wildlife. The sea is the lifeblood for Arctic peoples, providing food, clothing and the very heart of our cultures. We have a responsibility to protect the world which sustains us.

When emitted and deposited on Arctic snow or ice, the climate warming effect of black carbon is at least three times more than when emitted over open ocean.

As the Arctic’s first responders, the risk of a HFO spill is of deep concern for us, because equipment — however inadequate — to handle such a spill is stationed thousands of kilometers away from Nunavut’s shores.

For the people of Nunavut, it is within our common interest to keep the Arctic environment as clean as possible. A phase-out of HFO, if handled properly to ensure no economic harm to communities, will reduce the risk of a potential HFO spill and subsequent risks to our way of life.

While attending last October’s meeting of the IMO’s Marine Environment Protection Committee in London, I joined a delegation of Arctic Indigenous representatives from Canada, U.S., and Russia including Hans Lennie from the Inuvialuit Settlement Region and Verner Wilson III and Austin Ahmasuk from the Alaskan tribes to discuss with IMO Secretary-General Kitack Lim our concerns about maritime safety and the environmental impact of shipping on Arctic communities.

During our conversation, we raised the issue of HFO as well as the need for permanent representation of Indigenous communities at the IMO.

On the final day of MEPC, Secretary-General Lim, along with several Arctic nations, stated their concerns regarding heavy fuel oil, and on the need for further consideration of the risks it poses.

It’s now up to the IMO to take next steps towards ridding the Arctic region of HFO. It has an opportunity to do so this July, at the next MEPC gathering.

Momentum towards a phase-out of HFO is building. In January, the Arctic Commitment was launched during the Arctic Frontiers conference in Tromsø, Norway, bringing together organizations, communities, corporations and tourism operators to demand that the IMO phase out the use of HFO, and urges the shipping industry switch to higher quality, alternative fuels, before such a ban is in place.

The Arctic voice needs to be heard when it comes to reducing the impacts of shipping in our communities. Whether that’s here at home or internationally at the IMO.

It’s time the rules for shipping reflect the risks it poses to Inuit livelihoods and hunting.

The world’s dirtiest shipping fuel has to be phased out in the Arctic, and our territory needs to be protected and the health of the sea maintained for future generations.

Tagak Curley is considered to be one of the Fathers of Nunavut for his role in negotiating and establishing the territory.