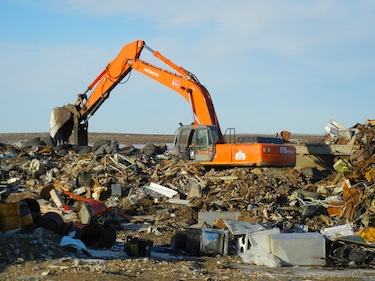 Heavy equipment was moving trash around all summer at the Cambridge Bay landfill — part of its $5.4-million makeover. (PHOTO BY JANE GEORGE)

If you live in Nunavut, you produce about 8.5 square metres of solid waste a year, enough to fill a couple of rooms in an average-sized house.

And it’s costing $173 a year for your hamlet to handle that waste — in the majority of Nunavut communities, this also means you’re putting up with smoke and pollution from open burning, bad odors and wind-blown litter from landfills.

To improve its handling of solid waste, the Government of Nunavut will have to spend millions of dollars, says a study on solid waste management prepared by its Department of Community Government and Services.

Consultants from the Yellowknife-based Arktis Solutions determined that the GN can look to spend more than $9 million per community to bring its landfills up to scratch.

Their study comes a year after last fall’s month-long dump fire in Iqaluit, which occasionally sent plumes of noxious smoke wafting toward Iqaluit, shutting down schools and government offices.

For the 73-page study, intended to advise CGS on how to manage its landfills in a more sustainable manner, consultants looked at the state of landfills across the territory.

They visited 14 Nunavut communities where they heard people are worried about impacts on the environment from windblown litter and the health dangers associated with open burning of trash, practiced in every Nunavut community but Rankin Inlet and Kugaaruk.

Residents in the majority of communities also said they’re worried dumps are located too close to their homes.

Most said they were willing to participate in waste-reduction efforts, such such as separation and recycling.

For their study, tabled during the recent session of the Nunavut legislature, the consultants also evaluated three approaches to solid waste management: a modified landfill in which waste is separated, incineration of waste, and a “shift and separate” landfill that relies on separation, composting, recycling and measures like a waste oil burner.

In the end, the consultants said the modified landfill was “considered the most financially-feasible approach that provides environmental protection and safe and efficient waste management operations.”

This would involve segregating bulky materials and hazardous materials from the rest of the solid waste.

Soil would regularly be thrown over the fenced-in waste “to reduce foul smelling odors and undesirable windblown litter.”

The consultants also recommended burn pits — as a way to better control open burns, and berms to manage leach water produced at the dumps.

But even this approach will have a steep cost for the GN — and estimated capital cost of about $9.5 million per landfill facility.

Iqaluit is considering where to put its new landfill and how the city can improve its waste management treatment, including adopting recycling, composting and waste-to-energy programs.

Cambridge Bay’s landfill has already undergone an extreme makeover, part of a $5.4-million project to better manage its solid waste.

That became critical after bulky refuse from its former high school, which burned down in 1998, ended up in the dump.

The project involves fencing in the landfill and burying its metal trash. The hamlet’s sewage lagoon also received a new berm and other upgrades.