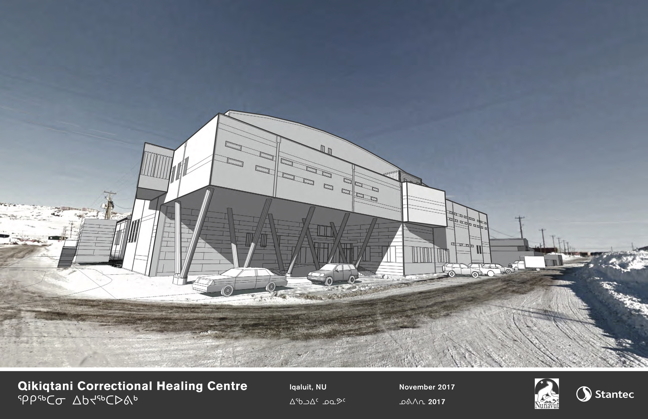 This image shows what the Qikiqtani Correctional Healing Centre will likely look like after it’s completed by 2020. Construction starts next year after the sealift. (IMAGE FROM GN JUSTICE DEPARTMENT) 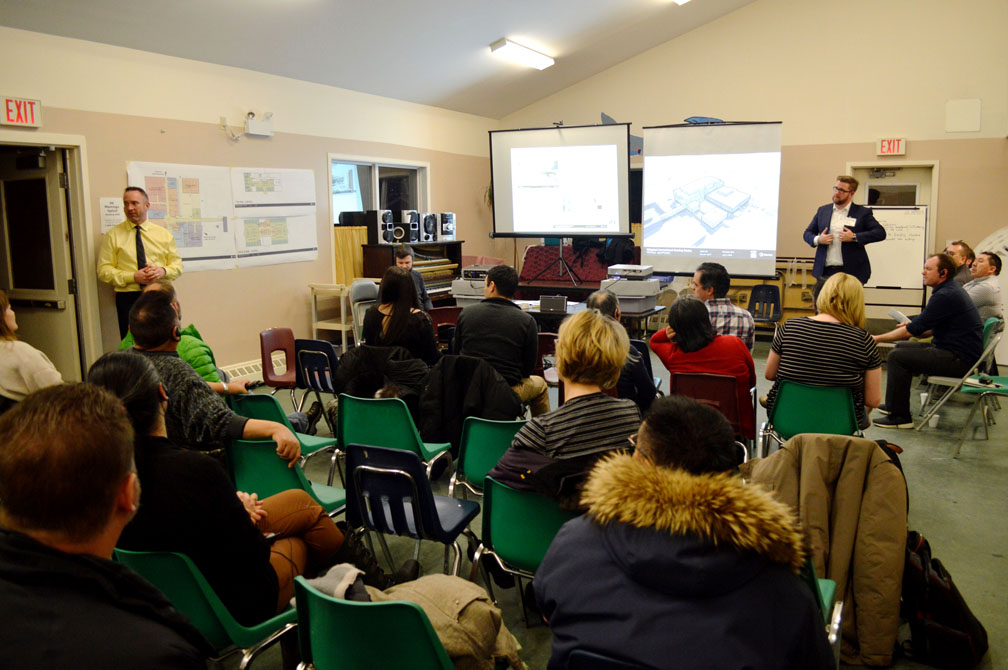 Iqaluit residents attend an information session on the Qikiqtani Correctional Healing Centre, which is expected to open in 2020. (PHOTO BY STEVE DUCHARME)

Designers of the new Qikiqtani Correctional Healing Centre say they hope the territorial jail will mark a new era of restorative justice in Iqaluit when it opens in 2020, amidst demands for a correctional system respectful of Inuit values.

Project managers had a chance to update the public on the new facility during a presentation of the building’s design and proposed programming at an open house at the Qayuqtuvik Food Centre in Iqaluit earlier this week.

“If this project is done right, we can help that.”

The 112-bed facility almost doubles the size of the 30-year-old Baffin Correctional Centre, which presenters added was already operating at full capacity as of Tuesday, along with the adjacent Makigiarvik minimum-security jail.

“We hope this facility is all this region needs,” said Stewart, based on inmate projections in the Qikiqtani region for the next 20 years.

Inmates at the three-floor facility will have access to better programming, an indoor gym, open air access and other rooms specifically designed to foster healing and cultivate Inuit societal values—like the round seminar room for counseling and its adjacent elders room to give inmates “a household-like” environment.

“Most of all, our idea was to reflect the population and to reflect the culture,” said case worker Nipisha Bracken, who sits on the Tassiugarjuaqmi Mamisarviksamik Qanurturtiit elders’ committee that’s consulting with the Department of Justice on the new programming for the centre.

But it was clear over the two-hour public meeting that many in the community remain deeply affected by the legacy of Inuit treatment in southern-style institutions.

“We want to see reconciliation,” one attendant demanded, who said he didn’t want to see Inuit prisoners “thrown in the garbage.”

“We are in a de-colonial phase.”

Another attendee was emotional when she called on corrections staff to give inmates more chances to perform civic duties—like shovelling snow—and to crack down on inmate abuse by prison guards.

Iqaluit city councillor Joanasie Akumalik, who attended the meeting, said he is happy to see the progress made so far on the project.

But the city councillor criticized the Department of Justice for its slow hiring of Inuit guards and caretakers, who he argued are vital to the success of any restorative justice among Inuit offenders.

“It’s disappointing for me and the community to [not] get hired,” Akumalik said.

“Its very important that these people in the [prison] are helped right now.”

Stewart responded that corrections staff are re-evaluating staffing procedures for the new facility, and stressed that jobs at the Qikiqtani Correctional Healing Centre will prioritize Inuit employees.

The goal of the jail, he said, is for Inuit employees, Inuit supervision and Inuit programming, building on the successes of the Rankin Inlet Healing Facility that opened in 2013.

“The issues that most of us are all very, very aware of, we’ve read about, at the current Baffin Correctional Centre are not lost on us,” Stewart said.

“It’s certainly a major reason why [the Department of Justice] is so determined to move forward from that past and move into the future with the Qikiqtani Correctional Healing Centre.”

Construction on the first phase of the building is scheduled to start after supplies arrive on the 2018 summer sealift, and will continue until 2020, when inmates and staff will be transferred from the Baffin Correctional Centre.

Once the new building is complete, workers will demolish and rebuild the Baffin Correctional Centre and attach it to the new three-floor jail, in a second phase scheduled for completion in 2021.

A connecting tunnel will be installed from the new building to the Makigiarvik minimum-security prison next door.

The costs to operate the new facility, and the number of new staffing positions available, have not been released.

Stewart was also unable to comment on any increase in funding for programming for offenders after they are released from prison.

The enhanced Inuit programming proposed at the jail follows growing calls for action by Nunavut judges who remain critical of the lack of restorative and rehabilitative classes for Inuit offenders.

“Anyone who doubts this territory is in crisis should travel with this court. The needs are immediate, the pain and suffering is real, but the sad reality is, very few, if any, offenders are ever rehabilitated the way things are now,” Justice Paul Bychok said during a sentencing hearing in July.