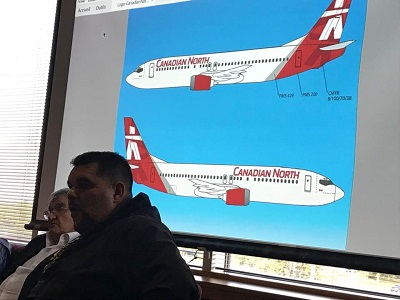 A rendering of the new Canadian North’s look, displayed at a Makivik Corp. executive meeting in Montreal last week. The new airline will be Ottawa-based. (PHOTO COURTESY OF MAKIVIK)

The Government of Nunavut says it’s keeping an eye on plans to merge the territory’s two major air carriers.

Last week, First Air and Canadian North signed an agreement to make their merger official. The full merger is expected to take place sometime in 2019.

The venture by Makivik Corp. and the Inuvialuit Regional Corp. has yet to announce how the new airline will affect travel in Nunavut. The GN expects there will be some impact on the territory, though it’s too soon to say what that will be.

While the merger is a commercial one, Akeeagok said the GN could be affected through its government air travel contracts.

The GN just wrapped up a period of gathering stakeholder input on its new airline procurement policy. A study commissioned for the GN earlier this year recommended the government be more efficient by centralizing its booking and using its “market-size influence” to reassess routes.

As part of that process, Akeeagok said the GN reached out to other airlines to understand what could attract them to come and work in the territory.

Now the government is preparing to launch a request for proposals, with the goal of having those new contracts in place by 2019.

“We do have some contractual agreements with the airlines,” he said. “Our message to the company is that those will have to be honoured.”

The GN, along with the City of Iqaluit and a short-lived Nunavut airline called Go Sarvaq, all lodged official complaints with the Competition Bureau, starting in mid-2015, when codeshare arrangements between First Air, Canadian North and Calm Air were first announced.

That short-lived agreements, scrapped in May 2017, allowed the airlines to jointly market each other’s flights. Critics complained that cargo and passenger service suffered as a result, and alleged that the airlines engaged in predatory pricing on the Iqaluit-Ottawa route.

The Competition Bureau dropped the investigation last year when it found insufficient evidence to lay charges under Canada’s Competition Act.

But the bureau will be reviewing the new merger, the agency confirmed this week in an email.

Part of the federal Competition Act requires that parties notify the bureau of transactions that exceed certain thresholds, such as when an entity’s assets or revenues exceed $92 million.

As part of the review, the bureau would consult with industry stakeholders and experts to find out if the transactions could prevent or lessen competition in that market.

The bureau also noted that any merger involving national transportation may be subject to a public interest review by the minister of transport.

“We’ve expressed interest as a stakeholder in participating,” Akeeagok said. “We want to be heard on that.”

“When it comes to a monopoly, we want to make sure the rates are somewhat protected, and that there are ways to ensure those are closely [monitored].”

Makivik’s president, Charlie Watt, said that as the parties go through the federal regulatory process to finalize the merger, he hopes Ottawa will recognize the realities of air travel and operating a business in the North.

“There is room for only one airline in the North,” Watt said last week after signing the agreement.

“The regulators have to understand that maybe the North needs to be dealt with differently. It’s time for the regulatory bodies to realize that people in the North have a better understanding of our issues.”