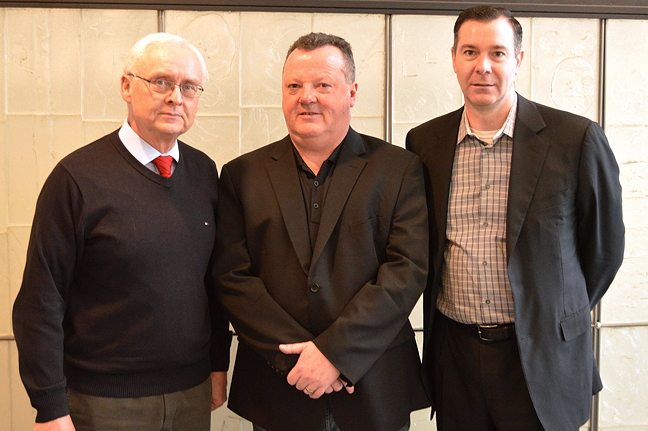 The heads of Nunavut’s three codesharing airlines pose outside the legislative assembly on Jan. 26, 2016. From left: First Air’s Brock Friesen, Canadian North’s Steve Hankirk, and Gary Bell of Calm Air. The Competition Bureau has cleared all three airlines of allegations that they engaged in anti-competitive behaviour and predatory pricing. (FILE PHOTO)

The Competition Bureau has ended its investigation into alleged anti-competitive behavior by Nunavut’s three main airlines, with the independent agency announcing it has found insufficient evidence to lay charges under Canada’s Competition Act.

But the dropped allegations followed an admission by the bureau that unprecedented discounts for passenger tickets between Iqaluit and Ottawa, which First Air and Canadian North offered in May 2016, “likely” contributed to the demise of Iqaluit’s short-lived Go Sarvaq flight operator in May 2016.

“Although it is the Bureau’s view that the allegedly predatory pricing promotions by First Air and Canadian North likely had an impact on Go Sarvaq’s entry plans, the Bureau did not find sufficient evidence to conclude that these were anti-competitive,” the Bureau concluded in an Aug. 22 report and accompanying media statement.

Go Sarvaq cancelled its proposed Iqaluit-Ottawa-Halifax air route before its first plane ever left the Iqaluit tarmac, after a spring price war by First Air and Canadian North drove them out of the market.

The Government of Nunavut, the City of Iqaluit and Go Sarvaq all lodged official complaints with the Competition Bureau, some dating back to 2015 when codeshare arrangements between First Air and Canadian North, and First Air and Calm Air, were first announced.

In its final report, the Bureau said it investigated three alleged abuses under Canada’s Competition Act.

• the merger between First Air and Calm Air airlines and its impact on cargo and passenger service in the Kivalliq;

• the now-defunct codeshare agreement between First Air and Canadian North on 16 northern routes; and,

• allegations of predatory pricing by First Air and Canadian North on the Iqaluit-Ottawa route.

The Bureau’s report said it dropped its investigation into the codeshare between Canadian North and First Air after the airlines announced in November 2016 they would phase out the practice by the spring of the following year.

But that announcement came only days after the Competition Bureau said it had filed applications in court requesting First Air and Canadian North hand over documents and records.

The Bureau also concluded that the regional benefits of the merger between Calm Air and First Air “significantly outweigh its anti-competitive effects.”

In a 2015 agreement, First Air agreed to bow out of most of their operations in Nunavut’s Kivalliq region, but leased its aircraft to Calm Air to operate 13 flights per week between Winnipeg and Rankin Inlet.

First Air was also allowed under the agreement to sell seats on Calm Air flights within the Kivalliq region through a codeshare.

The Bureau concluded that the “merger is likely to result in significant efficiency gains” and improved financial viability for both airlines after analysis.

Shortly after the release of the report, Canadian North responded that it was “pleased” with the completion of the bureau’s investigation.

The Bureau said it based its conclusion on the predatory pricing issue, in part, on an “avoidable cost test,” which compared revenue earned through tickets and cargo sales on a flight with the “avoidable” costs gained by grounding the flight entirely.

“The Bureau did not find that revenues generated were consistently below the average avoidable costs associated with the operation of flights during the period in which the alleged predatory fares were offered,” the report said, adding that there was no evidence First Air or Canadian North coordinated their prices against Go Sarvaq.

The Commissioner of Competition, John Pecman, said in a news release that the bureau would remain vigilant in ensuring compliance by Northern airlines under the Competition Act.

“[Northern air service] is essential to remote communities, businesses and governments who rely on it for economic development, food and healthcare,” Pecman said.