GN releases new guide to the human body, in Inuktut

“During times of stress, it is common for patients to revert to their first language” 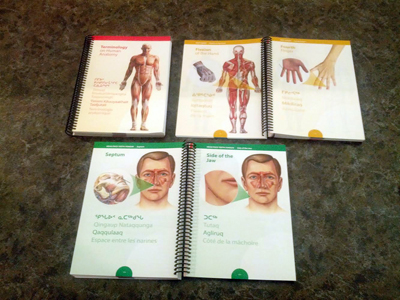 The illustrated glossary, which identifies more than 400 terms referring to the human body, will help improve communication between health professional, medial interpreters and patients, Okalik said.

“During times of stress, it is common for patients to revert to their first language, their mother tongue,” Okalik said. “Our elders have long been concerned about the quality of care when accessing health services in Inuktut.”

The Government of Nunavut worked with more than 75 elders, health professionals and interpreters from across the territory to develop the glossary, called Timiup Kisukuttilimaangita Taiguusingit.

“I would like to thank all those who were involved in completing this critical work, especially the elders who shared their knowledge with us,” Okalik said.

“Sadly, we have lost some of the elders since the project started. I am honoured and grateful, despite the loss to our communities, that their knowledge will stay among us with this glossary.”

The glossary will be distributed to Nunavut’s health centres and be used as a reference guide within the GN’s department of health and at Nunavut Arctic College.

During a 2009 forum on Inuit policy on sexual health, delegates identified the need to update certain health terms, given that in some Inuit dialects, the words for HIV and cancer were the same, Pauktuutit said.