Kugluktuk harvesters must pick up tags from wildlife office 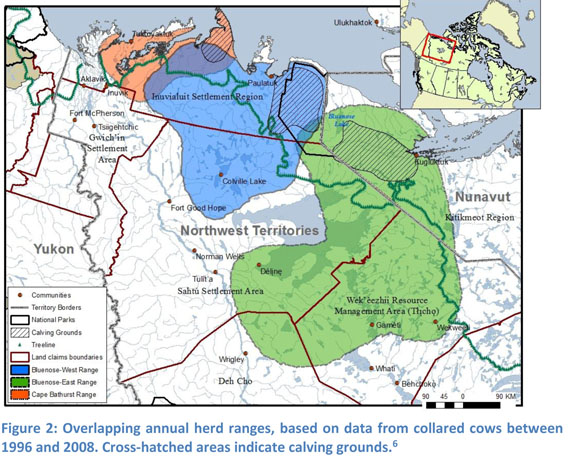 Kugluktuk hunters who hunt animals from the declining Bluenose East caribou herd must now abide by a total allowable harvest limit of 340 caribou, the Government of Nunavut announced Feb. 3.

That number is in line with a submission that the GN gave the Nunavut Wildlife Management Board at a public hearing in January 2016.

The Bluenose East herd ranges over a large expanse of territory straddling the Nunavut-Northwest Territories boundary and is hunted for food by Inuit from Kugluktuk and by Dene and Métis from the NWT.

Like many northern Canadian caribou herds, the population of the Bluenose East herd is in decline and has the subject of lengthy discussions and consultations among Inuit, Dene and Métis groups and the governments of Nunavut and the NWT.

The GN says hunters in Kugluktuk must get a tag from the local wildlife office before they go out to hunt, to prove they have an allocation under the total allowable harvest.

As for specific rules that pertain to the Bluenose East herd, Kugluktuk hunters should contact their local hunters and trappers organization, the GN said.

The number of caribou that may be harvested under the TAH—a quota of 340—closely resembles a joint proposal from December 2015 that the GNWT and the Tłįcho Government submitted to the Wek’ èezhı̀i Renewable Resources Board, which covers the traditional lands of the Tłįcho people, formerly known as Dogrib.

In that proposal, the GNWT and the Tłįcho recommended a total harvest of 950, with 339 going to Nunavut.

On the other side of the boundary, the GN recommended similar numbers to the NWMB: a TAH or quota of 1,000, with 340 going to Nunavut.

And in its submission the GN also pointed out that the Kugluktuk HTO had already agreed voluntarily to put various limits on hunting activities, such as:

• no sale or purchase of caribou under the HTO’s country food distribution program;

• a shift in harvest activities towards alternate species such as muskox;

• no sports or commercial harvest of Bluenose East caribou in Nunavut; and,