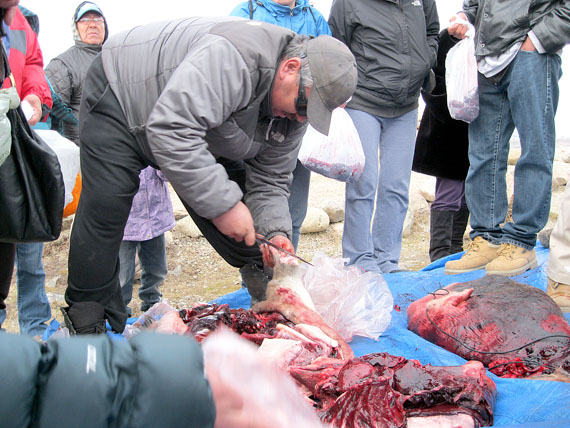 An Iqaluit hunter skins and butchers a seal at the community’s Celebration of the Seal event in 2013. (FILE PHOTO)

The Government of Nunavut announced March 16 that it has increased the price it pays Nunavut hunters and trappers for cleaned and dried seal skins, and that it will pay the cost of auction commissions for other types of fur.

The GN also plans to start covering the cost of auction house commissions on all other furs sold through that program, Quassa said.

“In a time when much negative publicity surrounds the Canadian seal hunt, we are taking action to ensure the continuation of this vital and sustainable part of Nunavut’s traditional economy,” Quassa said.

“We hope that this pricing increase will encourage seal hunters in particular to sell their sealskins through our program, which in turn will help us better meet the local market demand for dressed seal skins here in Nunavut and begin rebuilding markets abroad.”

Under the current program, the GN has paid a $13 bonus on every pelt paid at auction; the GN also provides free shipping when hunters send their fur to Fur Auction Inc. in North Bay, Ont.

But last winter, Arviat South MLA Joe Savikataaq accused the GN of playing favourites with only one fur-buying auction house.

That’s because Savikataaq estimates that about 90 per cent of the fur value from the Kivalliq and Arviat is shipped to fur buyers that the GN doesn’t support through their program.

Savikataaq also argued for an increase in the government subsidy on pelts, given the fee paid out to hunters hasn’t changed since Nunavut was part of the Northwest Territories.

In the meantime, the MLA argues the price of hunting supplies — gas, snowmobiles, rifles and traps — have risen.

Savikataaq’s concerns appear to have been heard.

“This decision clearly demonstrates the government of Nunavut’s recognition of the importance of hunting and trapping to Inuit culture and to the health and socio-economic well-being of Nunavummiut,” Quassa told the legislature earlier this week.

“The sale of sealskins and other furs is an important source of income for our hunters and trappers, and helps to ensure continued access to a bountiful renewable resource as well as contributing to food security in our communities.”