Four-year deal provides annual wage increases of one, one, 2.5 and three per cent 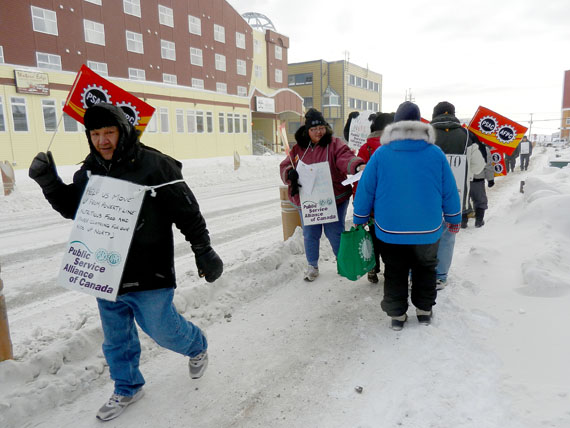 Members of the Nunavut Employees Union, a component of the Public Service Alliance of Canada, march in front of the Nunavut legislature in February 2012 during an information picket. (FILE PHOTO)

About 2,000 unionized workers with the Government of Nunavut will vote on the ratification of a tentative wage-benefit deal reached June 27, the GN said in a news release June 28.

The terms of the agreement are confidential until each side ratifies it, the news release said.

That means there is no public release of information on how much the deal would cost the territorial government or the size of any wage increases the union may have won.

The last contract between the GN and the Nunavut Employees Union bargaining unit that represents most GN workers expired Sept. 30, 2010.

In April 2011, the union demanded wage increases of five per cent in each year of a new three-year contract, plus improvements in the northern allowance and other demands.

The GN countered with an offer of no wage increase in the first year, and one per cent wage increases in the following three years of a new four-year contract.

After talks went nowhere, NEU members voted overwhelmingly in favour of strike action in the fall of 2011.

This past February, the union flew various NEU members into Iqaluit for strike preparation workshops and other activities, which included a rally held in the parking lot of the Nunavut legislature.

At the same time, negotiators from each side met in the Hotel Arctic with mediator Vince Ready, but those efforts failed to break the impasse.

In mid-June, the union moved closer to being in a legal strike position when it reached an agreement-in-principle with the GN on an essential services agreement.

Such an agreement, when completed, would list those workers who must remain on the job to perform tasks essential to the public during a strike.

But now that the two sides have reached a tentative deal, it’s likely that a strike will be averted.